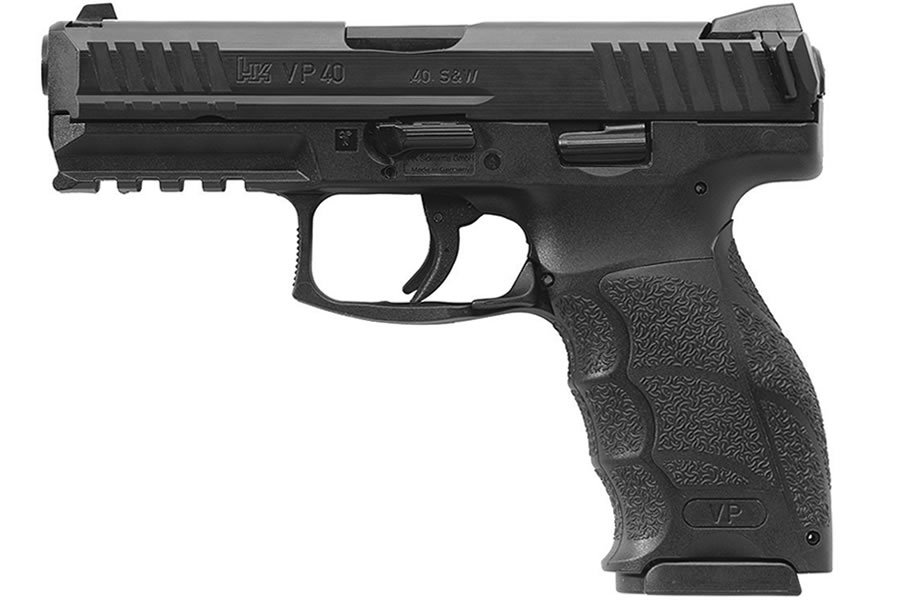 The H&K VP40 is the .40 S&W model of the acclaimed VP pistol line first introduced in 2014 with the VP9 (9 mm). In development for more than four years, the VP Series is Heckler & Koch’s latest handgun and the first striker fired HK since the renowned P7 series pistols were introduced in the 1980s.

Although influenced by other HK models, the VP Series has all the hallmarks of the latest, state-of-the-art handgun. All controls are completely ambidextrous. Slide releases are present on both sides of the frame and the paddle style magazine release can be easily activated by left- or right-handed shooters.The VP trigger surpasses those found on competitors. It has a short, light take-up with a solid, single action type break followed by a short positive reset. The VP trigger has a consistent pre-travel pull with a positive wall/crisp break. Typically, striker fired guns have a pre-travel pull that increases in weight as you go through the trigger stroke. With the VP, you have a less than noticeable pre-travel pull until the trigger reaches the engagement point of the fire control parts prior to trigger break.

In the box came 3 13 round mags, a speed loader, lock, 3 sets of side grips, 3 sets of back straps, and a molded case. I have probably shot 200+ rounds reloads, and Blazer Brass 180gr. and this gun has yet to misfire or eject. the night sights are spot on and needed no adjustment. The ergonomics feel great and give you a comfortable and yet firm grip. Now the best part of the gun for me is the Trigger!!!! It is awesome! Very little take up and even smaller reset. I love it and would highly recommend this pistol. I will be getting the VP9 Tactical next.