Shipping Information:
We are again experiencing a large increase in orders. Non-firearm orders are estimated to ship within 7-10 business days after the order is placed. Firearm orders will require more time. We apologize for any inconvenience. We are working to process and ship each order as quickly as possible. 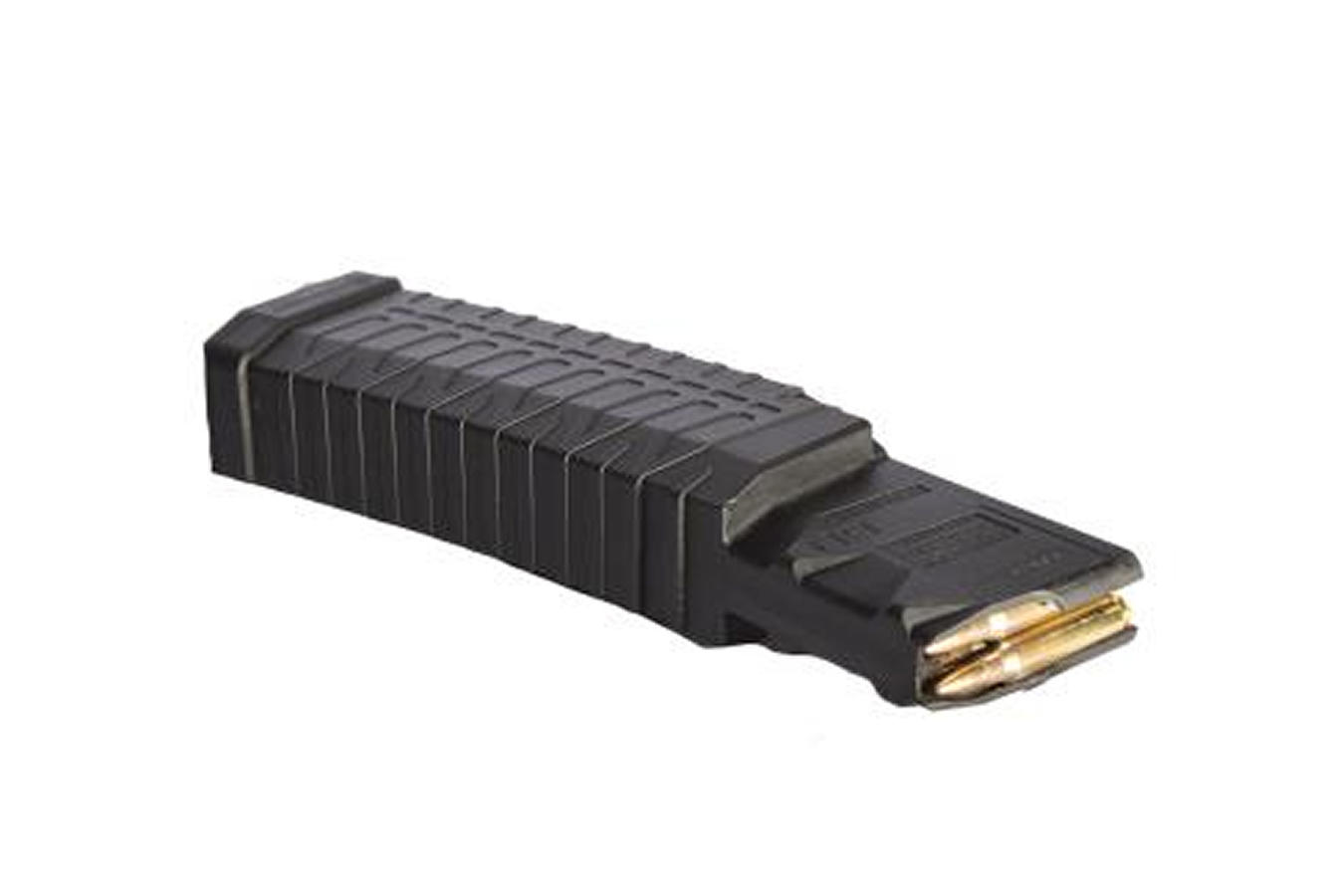 American Tactical has partnered with German arms manufacturer Schmeisser GmbH to exclusively import and distribute the Schemisser S60 60 round AR-15 magazine. Made from glass reinforced polymer, this patent pending magazine features a unique follower system that allows for double capacity from a normal AR magazine without being bulky or cumbersome. Designed to shoot both .223 REM & 5.56X45MM, the Schmeisser S60 will give you an instant capacity upgrade over the standard AR mag at an affordable price for your AR Carbine or Pistol.

**Note: The Schmeisser S60 was built specifically for .233REM or 5.56x45MM ammo only. Schmeisser & American Tactical have done some testing and found that the S60 may not operate with all types of .300 Blackout ammo.

This mag is ugly and very hard to load. Took me about a 30 minutes to find a loading method to make it past about 20 rounds. I HAD TO USE MY THUMB TO PRESS DOWN ON THE ROUNDS ONCE DOWN I USED MY POINTER FINGER TO HOLD THE ROUNDS DOWN AND THEN SLIDE A ANOTHER ROUND IN. Took to long to load and my fingers hurt but 60 rounds 40 bucks you can’t beat it.

I bought a couple of these mags and after using them at the range for over a dozen times, I haven't had a malfunction yet, I haven't fire in rapid fire due to the range restrictions on that but so far, I am as happy as I can be with it, they are hard to load the first few times but with time it comes easier, I am so happy that I am going to get a few more before the government passes a law banning that high capacity mag. Besides SOS has the best price on these mags by far so its a steal get yours while you still can!

Like you would expect, this magazine has stout spring that made my first attempt to load the magazine quite difficult for these arthritic hands. However, I put the mag on its side on a slight incline and liberally inserted gun oil in it. Then after a few hours I flipped it over on the other side and liberally lubed it again. Then after a few hours I stood it up on its base on a paper towel and let it drain for a couple of days. After wiping it off, it loaded all 60 rounds relatively easily, and now has yet to have a failure to feed at the range after several refills. Bottom line, you learn at 64 years old that using a little lube makes the insertion go a lot easier.

I have not had any problems, I haven’t shot a lot of rounds with it but I don’t see where there will be any issues. It actually looks better than the 30 round clips. Very happy.

Dang near dislocated my thumb trying to load this mag. I've read the reviews and thought maybe people were weak. I had to force almost every round into it.

This will work in the following reg AR15 and the FNH Scar16. It will not work in the HK MR556. But other than that, i’m pleased with it.

Looks great but it's hard to load and cant put 60 rounds in it! Not that satisfied.

Complete waste of money. Don’t buy. Only buy clips that come with your gun exclusively.

Well worth buying at $36.99. Just got 1. Worked flawless gonna get a couple more. As mentioned does add weight, length, and gets harder to load closer to being full. Loader would be nice to have.

I've run three full 60 rds through my ar a few times now and haven't had a malfunction yet. Definitely adds some weight but that's to be expected. You'll want something like a maglula to load it though.
I loaded mine by hand the first time and had to take a couple of breaks before getting all 60 rds in. With my maglula, I can do it in about 2 minutes.

These work just as well as the Surefire mags, and they are much cheaper. Will probably get more.

Lots of fun to shoot. Loading this mag at first was a little difficult due to the strong spring, but with a little force, was able to load all 60 rounds into it. Have shot 600 rounds using this mag and had no hangups or misfires so far. For the price it's a no brainer to purchase and just shoot for fun.

I have not been able to get more than 27 rounds loaded in this magazine!! That's not even half of its claimed 60 round capacity. It did feed the 27 that fit just fine but it was tough getting those in. By tough I mean I couldn't push them in that hard by hand and my single magazine loader left big dents on the last 4 rounds I forced in.
It's maybe a good idea but it doesn't work very well. To only be able to load half the claimed capacity is irritating.