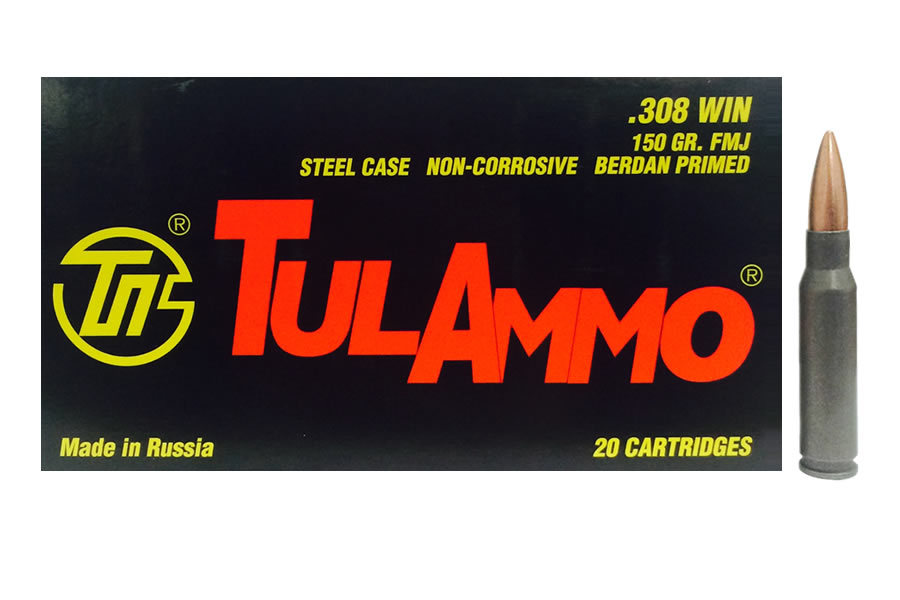 The cartridge .308 Win (7.62×51) is used for sporting and hunting shooting through bolt-action and semi-automatic rifles and carbines. The cartridge keeps its qualities under various climatic and weather conditions independent of the season and at a temperature from – 20 to + 50 C.

My c308 eats this stuff for breakfast, does not talk back, does not hiccup, never had to bump the stock. Just sucks it down like a shake from Mickey Ds. Can't say enough. I put over a thousand rounds of this down range. Only negative is, runs a little dirty. You'll do some cleaning but you won't be disappointed in the performance.

Tulammo Silver Tip or other works fine in my 20 round mags. Can be a bit dirty but not as dirty as wolf. This is my go-to for affordability hunting and target practice. However in my 45 Beretta I did have to take some Emery cloth and hit my slide where the bullet comes out of the magazine into the pipe or chamber.

It just works. You could take out a walnut at 50 yards. As accurate as hunting ammo yet 1/2 the price so you can use it for plinking too. Buy a lot of it and your deer rifle will be a year-round companion.

I have had several case head failures with Tula 308 in both a SCAR and AR10, which digest anything else we throw at them without issue. Use at your own peril. I've had better luck with Wolf, looking forward to trying some Barnaul when its within a reasonable price range again.

Company has good prices and stock is good when they get it like everyone else, I will continue to buy from them good people.

I think Matt had a bad rifle. I ran 60 round through mine and Im ordering more now. It works great!

I just bought a Savage TH 11 XP, .308 and put 120 rounds of this Tula ammo through it on the 1st day. Ammo and rifle worked flawlessly. 3 inch pattern at 100 yards all day long. Nothing wrong with the ammo, ejected just fine, maybe leaves residue a bit more than higher quality ammo, but not a problem to clean it up. I put this ammo through all my guns and have been happy with it!

I can hit dime sized groups all day long with this ammo in my AR-10. Zero malfunctions. Will buy again for sure!!

I had OK luck with steel cased ammo in my 9mm in the past so I decided to try this TULAMMO .308 man was it a mistake. I'm not sure if it was the ammo, or my Savage Axis II XP which was brand new and not yet broke in. I have had 6 rounds in the first 100 or so that refuse to eject bolt action where I physically have to beat on the bolt to get it to eject. Unfortunately I bought maybe 10 boxes of this ammo and it's trash. My gun is actually in my gun safe with a spent casing in the chamber I can't get out right now. Again I can't be sure if it was the gun or the ammo but I won't be buying either again! I would give it zero stars if I could.