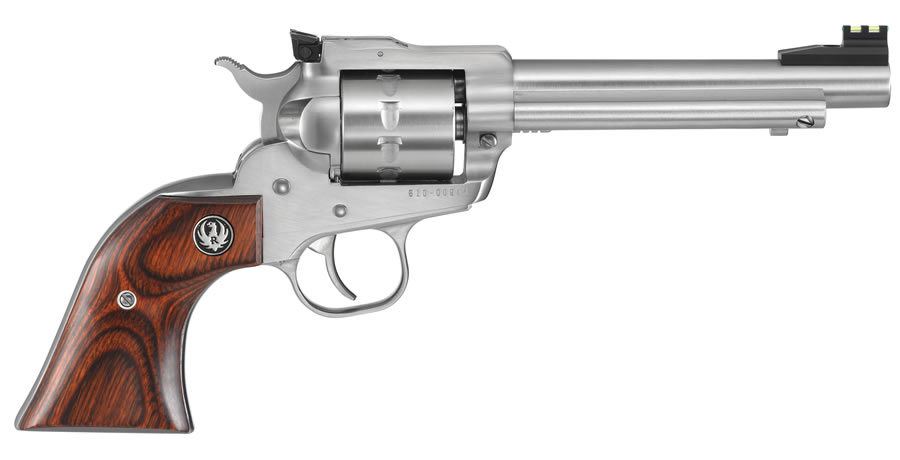 Single-Ten® models are stainless steel, single-actions with a ten-round capacity and hardwood Gunfighter style grips. They feature Williams™ Fiber Optic sights which utilize a square post and square notch configuration, providing a crisp sight picture and are click-adjustable for both windage and elevation.

just love the fiber optic sights, I just cant shoot well with iron sights any more. and the gun is perfect in every way . I think it is as good as a S&W and $450. less

Been wanting one of these for several years and finally made the purchase. Initial impression upon receipt was this gun is extremely well made. Beautiful stainless steel finish accented by the rosewood grips. Gun feels solid and substantial when held. Prior to first shoot, I took time to thoroughly clean and lube the gun. First 100 rounds were not impressive. Group was about the size of a 9 pie pan at 7.5 yards. Next time out I could see each grouping getting progressively smaller. Final result was 8 out of 10 rounds inside a 1 diamond. Apparently this gun requires a couple of hundred rounds fired to break it in. Have seen other reviews with complaints of ammo not fitting in the cylinder. Reviewers were blaming Ruger. I experienced a similar problem but it was caused by the ammo. I have run Federal, Remington, and Winchester through mine. Federal and Remington ran without issue. Winchester was a different matter. Out of 100 rounds, 13 would not fit. Several others fit, but with extra resistance. These rounds were also more difficult to eject after firing. Also, out of the 100 there were 2 FTFs. Hopefully for Winchester this poor quality box was the exception and not the rule. Another complaint I have seen is the grip size. I find the rosewood grips quite comfortable and will either get 1/2 my little finger on the grip or just let it rest underneath. For those of you with large hands, Hogue makes a grip that will fit this gun. I believe it is model 83000. The package label says it fits the Blackhawk, Vaquero, and Single Six. I had an unused set of these and tried them on the single ten. They fit perfectly. They have a full 3 finger grip and overall are larger than the wood grips. I have not fired it with these installed yet but the gun feels more stable with them. I also have a Mark II target semi-auto. Both are fun to use. I like the Single 10 for its mechanical feel and for slowing down my rate of fire. The action of physically cocking for each round makes you take extra time to concentrate on the mechanics of shooting. Overall, I am extremely pleased with this gun and recommend it for anyone wanting that cowboy action!

Bought this as a gift for my father because of his love of cowboy-style firearms with the bonus of easy-to-shoot .22 caliber and the easy-to-see fiber sights. Much like Rugers SP- and GP-series revolvers, the Single Ten is a hefty chunk of metal and built like a tank. The heft negates almost all of the .22s already light recoil. The wood grip is a beaut to behold in person and the sights are perfect for target shooting. My chief complaint would lie solely with the gunfighter hand grips, which are small for even medium-sized hands and never feel particularly comfortable. Gripping the gun high to get all fingers on the front makes for an awkward grip. Ultimately Im left hoping that Hogue takes notice and develops a longer grip as they did for Rugers SP line.