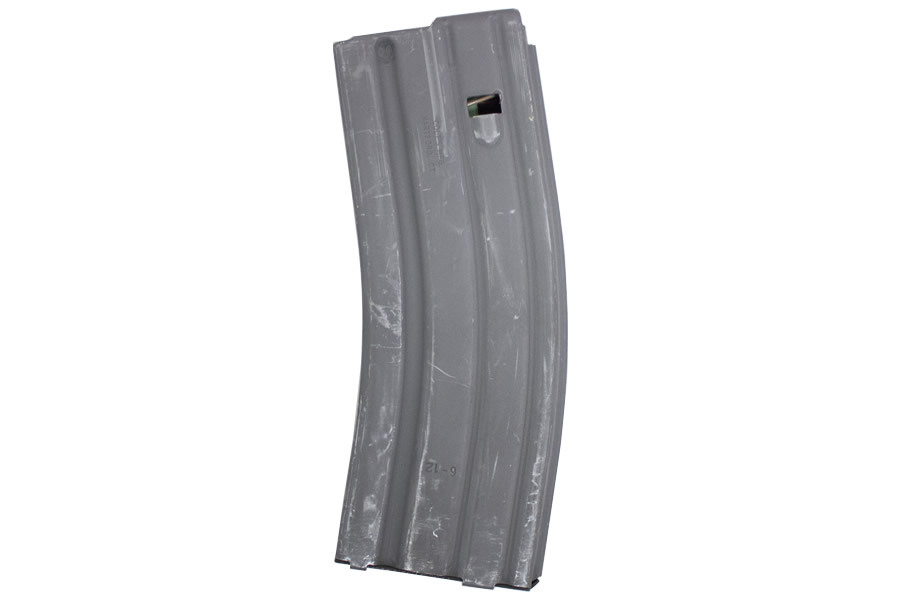 These Colt AR-15 5.56mm magazines are essentially the same as the famous NHMTG USGI magazine, but made to Colt's specifications and tolerances. Constructed with an aluminum body, these magazines also feature an anti-tilt follower.

Note: Like most USGI aluminum magazines, Colt AR-15 magazines feature a dry-film finish. The finish will show markings from production, testing and shipping. These markings are purely cosmetic and do not affect the performance or functioning of the magazine.

I expected scuffing and scratches, not magazines that have been to war and back. Ordered two and they arrived looking like they came from the used bin from my local army navy store. Stop selling used merchandise as new!!

After close examination these colt mags show no wear at all. Wouldn't you want a tested mag by professionals? Haven't had a chance to test them yet but the Colt name and company is enough for me. I will follow up after I test them.

I ordered two of these mags with the purchase of a colt LE6920. Upon arriving these magazines were just placed inside the box taped to each other with no wrapping or anything. Just the two bare mags stuck to each other with clear tape. They are marked 6/12. I have purchased multiple new colt magazines and yes they all show slight production/test wear. However, these magazines show some heavy wear! They are scratched, scraped, and beat up! These are clearly not new, perhaps surplus function is perfect so far and price is good. So for you peeps that have OCD with scuffs, scratches, and dings, beware!

(5 out of 5) Excellent value and name brand great mags!
by Ryan from Wilsonville, Oregon on September 23, 2016

Bought twenty of these mags. They have a phosphate finish and are used, but they are in excellent shape. Genuine Colt and I want to buy more!

These magazines are brand new, and genuine Colt. However, like any dry film finish mil-spec magazine the finish will show markings or light wear from production, testing, storage, and shipping. The magazine are 100% tested in fixtures similar to an AR-15 lower receiver and they are not individually packaged for storage and/or shipping.

I can't believe these 1 star reviews. But I guess Magpul is the standard in the market these days.

"The bodies are scuffed up where they have been inserted in the magazine well." Really? These are made by the same company that makes NHMTG mags, and almost every aluminum mag in the world. Every mag is tested for compliancy in a magwell before it's approved for use. Of course it'll show wear.

Do your research before you buy something you aren't familiar with. Ask Magpul if THEY test every single mag before shipping. I'm going to guess they don't.

Scratched, scuffed and clearly used. Wear can be seen especially on the portion of the magazine which is inserted into the mag. well.

Same exact magazines we were given years ago when I was in the military. Function was as expected - works even when you think it shouldn't (sand, water, etc.). As description mentions, they did come with markings in the finish. Our new field mags were never spot-clean, so that wasn't a surprise.

I bought a few of these about 4 months ago. But I received an email from Sportsmans Outdoor Superstore tonight with these on sale again. CLicked to see if the price dropped any and read some of the reviews above. In regards to those 1-star reviews, I can say that when I bought mine, the description did NOT mention scratches, but it does now.

But also, anybody who has ever bought original type AR-15 mags KNOWS about the finish. They DO get scuff marks pretty easy. But that doesnt mean they are used like some other review mentioned. These aren't plastic magpul pmags. They are the real deal.

The Colt 30 round magazines are listed as being New. I ordered five magazines and each of them is used. The bodies are scuffed up where they have been inserted in the magazine well. The followers show signs of wear also. Each magazine is actually date stamped 6-12. In addition, the mags were supposed to be in stock but it two weeks for them to be shipped. The only positive might be the price. I will probably keep them for the price. However, between getting used mags when I ordered new, and the slow shipping, I have doubts that I will order from this store again. Buyer beware!

I have 2 of these mags, Loveem! They are durable and cycle great and Colt stamped, which adds value! Oh, and at a great price too! Can't wait to buy more.