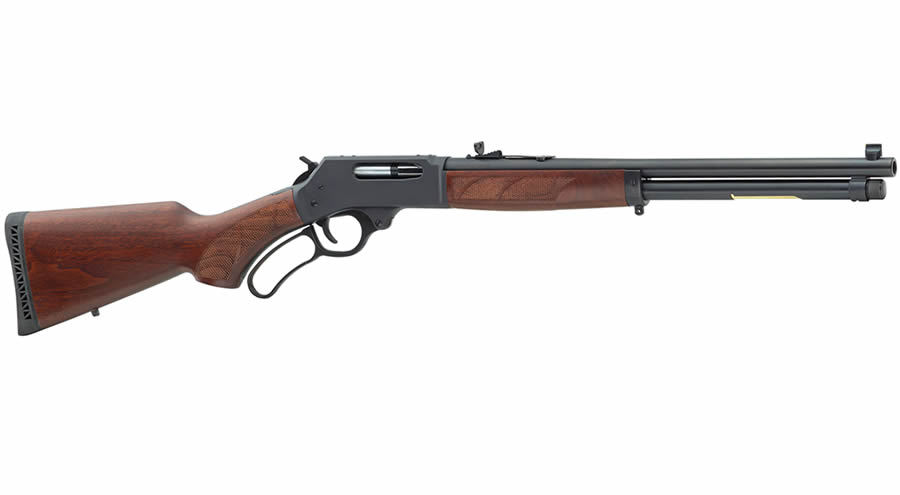 A caliber that traces its origins from the battlefield to its modern-day presence in hunting camps across the country.

Introduced by the U.S. Army in 1873, this cartridge was first known as the .45 Government. As it made its way into commercially produced firearms the name .45-70 appeared, because it was loaded with a 70 grain blackpowder charge with 405 and 500 grain bullets. Virtually all rifle making companies of the late 19th century chambered their single shots and lever actions for the .45-70. As those companies and their rifles faded away, the .45-70’s popularity did not. Factory .45-70 ammunition has been cataloged continuously since 1873 but never in the variety of loadings available now, in the 21st century. They range from 405 grain lead bullet, low-velocity loads for deer hunting and target shooting to high-velocity 300 to 400 grain jacketed bullet ones meant for even the largest game in North America.

The Model H010 .45-70 can handle them all. Its receiver is blued steel fitted with an 18.43” round barrel underneath and a tubular magazine of four-round capacity. Its pistol-grip buttstock and steel-capped forend are crafted of beautiful American walnut and cut with checkering to provide a sure grip. The buttstock wears a soft rubber pad to help shooters handle .45-70 recoil from a 7.08 lb. rifle.

If you need a handy yet powerful lever gun capable of fast repeat shots in the bear country of Alaska, or just a short, light rifle for deer hunting in the mountains of Pennsylvania, the Model H010 will provide the accuracy and reliability you can count on.

First of all, I am a fan of the .45-70. I have 4. I bought this short barreled rifle since I hunt in thickened areas where the ability to move is often hampered by vegetation and shots are at close range. The 18 inch barrel is ideal for these conditions. I was fortunate enough to have drawn a cow elk tag last year.
On the second day, the Henry was put to the test. One shot and a 700 pound cow elk was on the ground. As I was using cast bullets there was little meat damage but the hydrostatic shock of the 406 grain bullet jellied the heart and lungs, and it left a .458 diameter hole on the off side. The shot was at 50 yards. I keep it zeroed at 100 and it stays there. If you want a great hunting firearm at a reasonable price, I highly recommend the Henry .45-70.