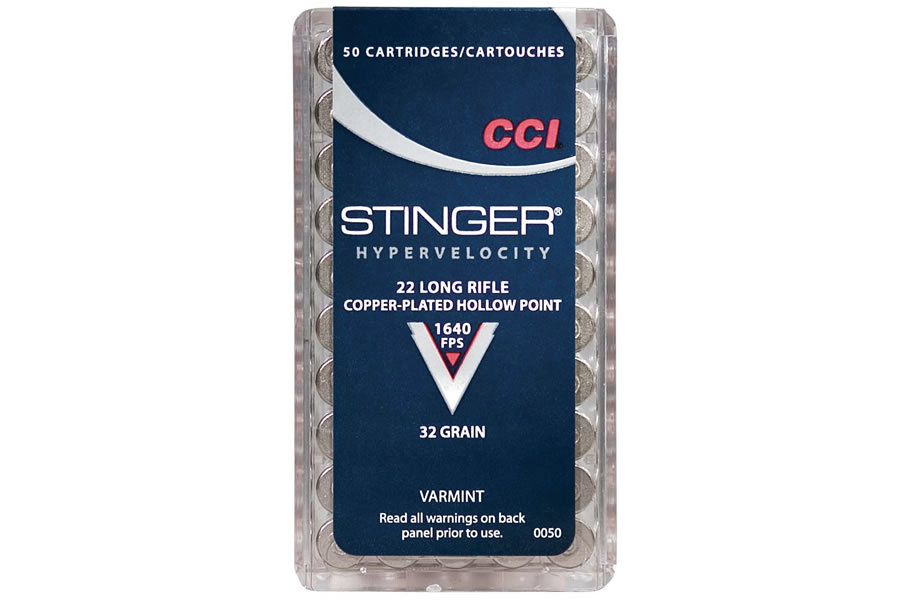 Pests can be hard-to-hit problems. CCI has designed options for the needs of shooters. Their shotshell options are excellent answers at short range, while the CB long’s accuracy makes it an ideal choice when pests present themselves a bit farther out. And for those times when no bullet is the best choice—our Noise Blank is available. What sets them apart from everyone else is CCI’s industry exclusive in the Pest Control/Specialty line.

This is the only round I Trust not to jam in my Remington nylon 77. I always have thought it was because of the different casing material but it could be the longer casing. In any case, I have had DG4Rthe gun since I was 12, 51 years, so I would assume that makes it tried and true.

My order came in on time and I'm very happy with my bullets. Great service.

This is the best ammo for .22LR pocket automatic pistols. The Beretta Bobcat will function with 1435 FPS, or some 1200 or 1260, but if you want 100% cycling, and a hard hitting nasty .22LR, USE THIS! Seacamp shooters also seem to like this stuff too. I got a .25ACP Bobcat, and its more enjoyable to shoot, but Stingers are kind of known for being THE ammo to use in a Beretta Model 21A, and I have to agree. The recoil tells me getting hit with this has got to be a bad experience. The 21A is fun to shoot, but Stingers are hot fast, and the .22LR fools you into thinking it would flip around that much. This stuff will. Its also pretty darn good in some rifles, from Ruger, to Remington, to CZ. To me, this is pocket pistol ammo, used at close ranges to diffuse any seriously bad situation, when all other attempts at non-violent solutions have completely failed. Being a .22, you will need to give someone a face full of these. I pray it never comes to that for anyone, but in the mean time, use it to practice! This is my designated Beretta Bobcat carry round. I have always kept a small stash of it, and two mags full & ready for whatever.

It's a great round. It has that power you need to take out pests where using a rifle or shotgun is out of the question. It doesn't have the best accuracy out there, but hey, it's not meant to. It's a hunting round, not competition. I would highly recommend, at least if you're running it through a bolt-action, the longer casing might be a problem for semi-autos.

Sportsman Outdoor Super-Store, has been flawless in product pricing and customer satisfaction, the SHIPPING company used to transport items.. leaves much to be desired at times!! My last order, arrived contents of package damaged and package itself appeared to be crushed against a wall, or something. Filed a complaint with shipper..nothing!!

CCI Stingers, are without a doubt.. one of the best 22 LR cartridges on the market today. Although, I must agree with Raymond.. the loner casing does present an ejection issue in some auto-feeding firearms. IF they work in your firearm, then by all means.. buy all you can find.

CCI Stingers would be the perfect .22 LR round if it were not for the slight difference in casing size. They are measurably LONGER. That is how they get the extra powder charge to push the round so fast. A few handguns will have some trouble ejecting this round. However, it will run through your gun, you have a 22 round that will reach out and touch, whatever you are shooting at. I buy all I can get.

This CCI Stinger round is really hard to beat. The ONLY con to this ammo is the extra length of the brass. If your auto loader cycles fine with it, then this is the BEST ammo for you. Super fast ammo and really hard hitting. The trick is to find this ammo at a reasonable price. Check it out. Rocky222

Ammo is fine ..but my review is for this company. To put it simply they are the best out there from shipping within a day to real person on the phone for customer service