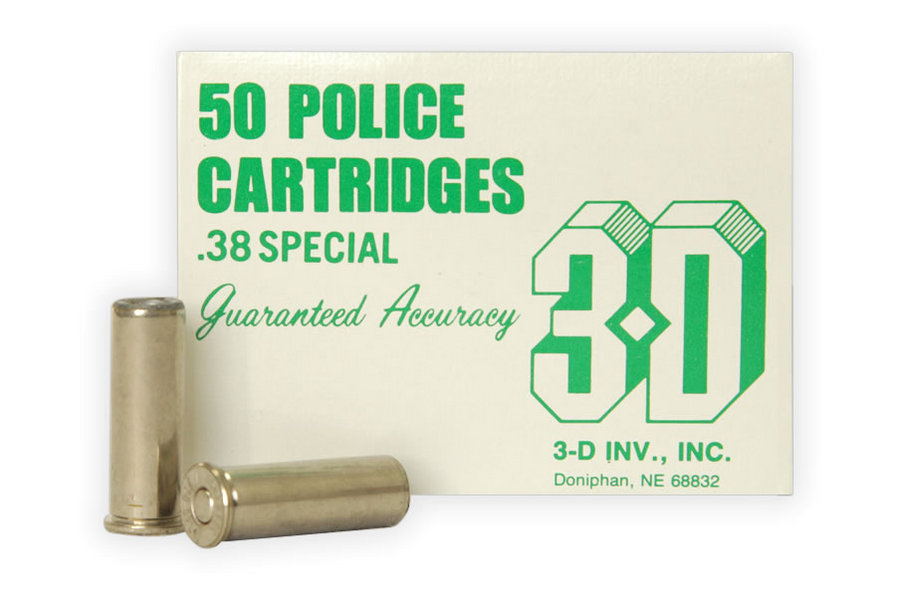 This is older manufactured ammunition that was being stored in a police department warehouse. When found, the ammunition was still enclosed in its original factory-sealed case, and the cases had not been removed from the manufacturer’s original shipping pallet. The exact date of this ammunition is uncertain.

The best .38 ammo I have shot. Very accurate and reliable. My only slight complaint if any is they are a little smokey, however don't let that deter you. If they come back in stock I will be buying more than I need because I was so pleased with how they performed. Very easy on the hand. I have a 357 stubnose that I use them in.

Overall this is great practice ammo. Puts nice round holes in the target. Boxes arrived a little beat up, but every round went bang. The brass is reloaded and is from different manufacturers. Smokier and more residue than I was used to, but cleaned up no problem. For the price, you can't beat it. Getting ready to order another 250 rounds...

I got this ammo a couple of days ago. This was shipped in a timely fashion. I shot a couple of cylinder fulls out of an old Smith and Wesson Model 15-3, and it proved to be very accurate, like 6 shots in 3/4 at 13 yards, accurate. I wish I had ordered 1000 instead of 500.

I bought these when they were on sale for ~$0.23/rd, and they're pretty much what everyone here notes. A wee bit dirty not really too bad, and in reloaded brass that is in great shape.

Loads seem pretty light, and worked great, and were quite accurate at all distances up to 25 yds. I did get a bit of keyholing on about 3/10 rounds on average when running these through a lever action rifle at 25yds. Still pretty accurate though.

I wished I could get this again for years. Great standard pressure all-round ammo. This was the only 38-Special ammo I used many years ago. I have never had a bad round. I would even use it for self-defense. Even though the conventional wisdom says to only use new factory ammo for self-defense, in a revolver you don't have to worry about clearing a bad round - you just pull the trigger again. But like I said, I have never had a bad 3D round.

I picked up some to try out. Works well. Teaching my friend to shoot and she loves these. Not too much kick. I wish they had a shipping deal, I would stock up. Clean crisp hole in targets. Not too dirty. They do come loose in a box.

Had fears of black smoke, sparks, poor performance etc. but was pleasantly surprised by accuracy, minimal smoke, the nice hollow-point wad-cutter design and low noise. Often wad-cutters are about 114 decimels about the same as 25 ACP. But these seemed even quieter than that. I shot these w/o ear protection and my ears didnt even ring. & who can beat the price

I bought 500 rds of this ammo to use with a new to me 1976 S&W 19-3 4 revolver. Took it out to the range and, wow! The combination of these rounds in this particular handgun is amazing. Very accurate ammo @ 7 and 15 yards. All the rounds I received are nickel and a mix of Winchester, Remington and Federal with a light mix of Peters, Western, CCI and Starline. The boxes are flimsy and a couple didnt make it in transit loose rounds floating inside the box but all the rounds were there and they appear to have been stored properly over the years. They didnt appear to be overly smokey I shot them outdoors and they aren't any more dirty than other ammo I have shot out of my fathers revolvers in the past. I'd recommend for the price!!

Arrived in two days. Very well packaged. Ammo looks new, not remanufactured, tho I know it is. All the rounds were as accurate as my ability to hit what I was aiming at. No failures. Were used in two different types of Ruger revolvers. I am very pleased, would buy from again in a heartbeat.

Since ammunition has gotten so expensive that you need a second mortgage to go to the range, I was looking around for some cheap stuff. I came across this and ordered 10 boxes. This ammunition is pretty good. Its accurate, reliable, has mild recoil as youd expect, and while its not the cleanest Ive ever fired, its clean enough. Id also like to commend Sportsmans Outdoor Superstore for very fast processing. My order came in 3 or 4 days. I like it so much I just ordered a full case to keep feeding my .38s. Give it a try!

Initially ordered 3 boxes. Put a box of 50 through my GP100. No firing issues. Seemed a bit dirty but nothing normal cleaning and maintenance couldnt handle. Did notice a lighter and muted pop when immediately stepping up to incrementally heavier 38spl 125, 130, 158gr and 357mag 158gr loads. Overall a good value for target practice. Will be ordering another 13 boxes shipping cost is same for 7-13.

Bought 4 boxes to try it out, and my only regret is that I didnt buy more. In 200 rounds through my ruger .357 I had no ftf or other issues besides 2 rounds that were ~8 inches off target at 15 yards, an inconsistency I can attribute to the ammo. A little dirty, but thats to be expected from reloads, and leading was minimal. For a budget training round I would definitely recommend.

Kind of dirty and the boxes have a tendency to fall apart in shipping. They shoot fine though. Put a couple hundred rounds through different guns and no problems so far.

My first orders was for 5 boxes of 3D wadcutters. Went to the gun range and shot 100 rounds from my 357mag. and was very please. This ammo made nice, clean holes in the paper at 15, 18, and 21 feet. They are a little smokey and dirty when firing, that is the only reason I gave a 4 rating for performance. If you like to use wadcutters, these are for you. I just placed another order for 10 more boxes.

All rounds went bang, good accuracy and a bit of residue. No problem thats why you clean your gun.

These wadcutters performed pretty well in all 3 of my revolvers and held a good pattern at 20 yards. The brass is once-reloaded and is from different manufacturers. All cases looked fine before and after firing. The powder does leave a bit of residue. With prices of ammo sky high, you really cant beat these for some target practice.

When these arrived in the mail, I was somewhat apprehensive. The product packaging is of poor quality and both boxes had come open and I had loose cartridges rolling around inside the shipping box. Also there was a distinct smell of sulfur coming from them. I was concerned that I would have some misfires with them.

I finally got to the range and fired off one box and every one fired fine. And they made perfect round holes in the target.

They did seem to produce more smoke than I am used to.

I am happy and ordered 4 more boxes.