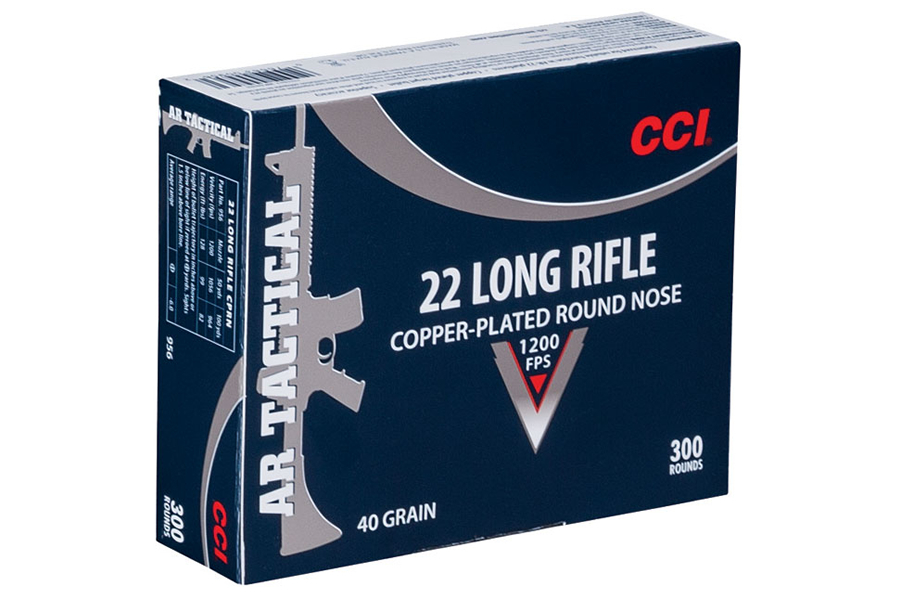 For the backyard plinker or the competition shooter, CCI has what you need. For accurate, extremely consistent ammunition the only option is CCI’s Competition, Target and Plinking line.

Like CCIs AR ammo, it is my new HV fav. A bit better POI in my guns than MM.

This is the only ammo to use in the S&W M&P AR-22, I have used the ammo from day one and NEVER had any Stoppage of any kind.

Runs very well in my 10/22 rifles and my 22/45 lite. Copper cladding keeps lead deposits down, high velocity works the actions on these autos wonderfully. It’s less expensive than so-called match grade ammo, too. You won’t be disappointed. CCI is all I run after trying several Federal, Winchester, and Armscorp varieties.

After a lot more rounds it's evident the ammo I'm using is the cause of the failure to eject. The CCI has some coating on it which gums up the rifle. If I clean the barrel it ejects flawlessly for 10-15 rounds then gums up.

Have tried several other brands of ammo through my M&P 15-22s, FTFeed and FTEject too numerous to count. Read reviews on this ammo and decided to try. Noticeable difference in the way ammo stacks in magazine - bullets stack “nose up” as they should with no problems. No FTFs or FTEs. Excellent ammo. Also performed excellent in my M&P 22 compact pistol.

I have purchased over 10K rounds of this ammo and most if it from Sportsmans Outdoors Superstore. Great pricing, great ammo, functions well in all my pistols and rifles.

I've run about 1,000 rounds of this through my M&P 15-22 MOE. Not one single jam or malfunction. This is the first ammo I've had in that gun that works so perfectly. Other stuff, even the more expensive stuff, would sometimes malfunction, but not this.

This shoots the best and at a great price.

Very Happy with this ammo...and the price is on target; pardon the pun. Will always look to this brand first.

I have purchased Several Boxes of the CCI AR TACTICAL 22 LR. this is the ONLY 22 LR. to use in the S&W M&P AR 15-22 Sport. I have used 600 Rounds to this point without one failure of any type. No misfires, no failures to feed, and no failures to extract. Cleaning was as to be expected after 300 rounds, 1 trip to the range but nothing a little Hoppes # 9 could not handle. CCI 22 LR. has always been top of the line stuff.

This CCI AR TACTICAL 22 LR is the best AMMO that can be used for the S&W M&P AR 22 Sport. This is the first AMMO that I have used in the Sport that did not cause some kind of a malfunction. No fails to feed, No fail to extract, NO DUDs with 200 rounds fired. The accuracy was very good, grouping 3 at 50 yards with the open sights and my old shaky hands and poor eye sight. The only thing that is the least bit of a problem is the packaging. The easiest way to load this ammo is to take one of the 100 round frames of ammo out of the box and remove the rounds from both ends to the center. If you pull the rounds out from the top is very slow and very tedious. Once you get used to loading this ammo, you are in for a whole lot of fun.

Here is yet another offering by this outstanding company CCI. Performance at the range was flawless.. NO jams. or problems with this ammo. Easy clean-up after a full day of shooting.