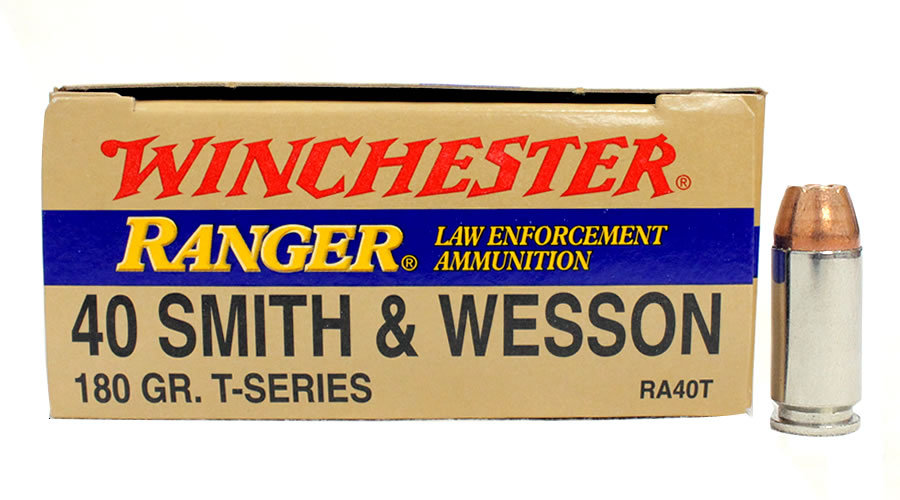 Actual box design may differ from what is pictured, but the item itself is the same.

For a full case of this ammunition, order in multiples of 10.

Write a review
(5 out of 5) Great Find at Sportsman's Outdoor Superstore
by Bob from SAN ANTONIO, TX on October 31, 2022

I happened to run across this ammo being available at Sportsman's Outdoors Superstore earlier this month, I hadn't seen this available anywhere since 2018. I emailed a question and promptly received a response from Nathan O. in customer service! The ammunition is in the newer black Ranger boxes instead of the tan boxes in the listing image so I sent my order in straight away. My order was processed and shipped PDQ and this ammo arrived in perfect condition. A win-win all the way around!

I ordered 4 boxes of this ammo when I came across this listing`;` 50 cents a round is an incredible deal for such a proven defensive load. Fired 50 to function check my carry gun XDm 3.8 .40 compact, the ammo performed flawlessly. My XDm is the most accurate compact I own, and this ammo performed as well as any I've tried, it's more accurate than I am.
I also did some redneck gel testing water jugs and soaked phonebooks. Not at all scientific, but the rounds expanded aggressively and consistently through both mediums. Lucky Gunners gel testing can be referenced for further info. There's not much higher praise I can give a product than to include it in my self defense setup`;` this is my EDC ammo. Enough said.

As former law enforcement they made us stop using these exact bullets back in the late 90’s. With that being said, they are still just as dependable today as they were then. 4 layers of denim and ballistic gel at 10 yards produces the same nasty razor edged mushroom that it was producing 25 years ago.
Awesome ammunition to put up for hard times in the future. Also, it chronographs 1024FPS out of my Glock 23 Gen 4 at 10 feet from the muzzle.

Without a doubt, Winchester has been producing some of the finest ammo on the market. This would explain their difficulty been found on the market..and having been an active shooter for some forty years now.. I can honestly attest to the performance of this ammo. My .40s love this stuff, and function flawlessly every time out. It IS my go-to ammo for home defense and will remain so!! You can bet your life on it.. I do!!

(5 out of 5) Performance
by Clarence from Whitsett, North Carolina on November 10, 2016

I also purchased 4 boxes of this ammo and got the same results with the one gallon water jug. Blew a massive hole out the back of it while tossing it several feet in the air.

Received it a day early and is great ammo. First time I've used you guys, won't be the last.

This is some of the most outstanding ammunition I've ever used. It's a shame it's not commercially available to civilians, but that's because of politics. When I first ordered this, I didn't know what I was actually buying and only ordered 2 boxes because they were JHPs and relatively cheap. When I researched them and found out they were 3rd gen black talons I went to order more and Sportsmans Outdoor Superstore was all out and I couldn't find them anywhere else. These are hands down the best JHPs I've shot in 40 S&W. They tossed a full gallon water jug several feet in the air, and completely disintegrated a very large watermelon in one shot from 20+ yds away. These are definitely my go to for self defense and I wouldn't trust my life with anything else.