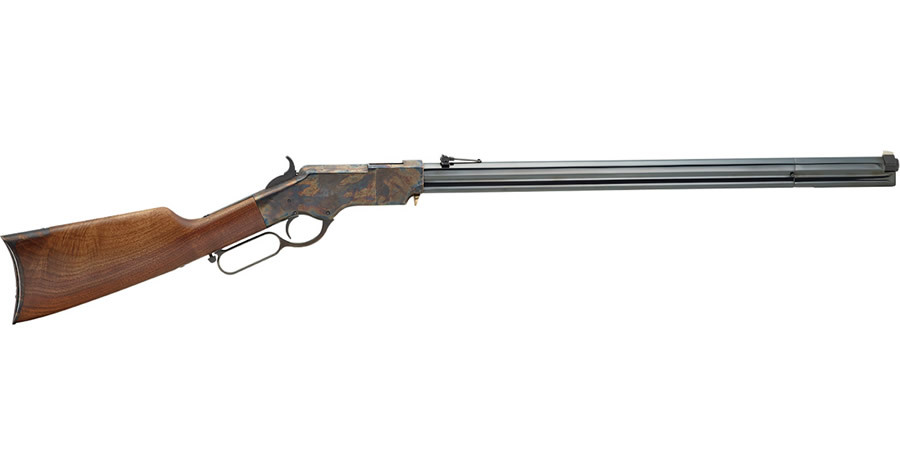 Shoulder the new Henry Repeating Arms Original Iron Frame Rifle and step back in time: to an era when men stood bravely for what they believed...headed out in search of the next great frontier...lived off the land...and embodied the true American spirit.

In the late 1850s, metallic cartridges were the coming wave of firearms technology, and besides the difficulties inherent to developing reliable and effective self-contained rounds the new ammunition demanded equally new gun designs capable of taking full advantage of what the quick-loading cartridge offered. Cartridges that revolutionized a field of slow-loading, slow-firing, and slow-reloading powder & ball single-shots freed designers to create a rifle that could keep up, and the very talented Benjamin Tyler Henry quickly stepped to the front in both areas. The result was the legendary repeating rifle that became known as the 1860 Henry, in .44 Henry Rimfire.

With great effort, and more than a little pride in a job well done, Henry brought back the Original Henry Rifle, made entirely on US soil, just as B. T. Henry’s rifles were. True to Henry’s 1860 patterns and patents, and virtually identical aside from concessions necessary to adapt to the .44-40 centerfire rounds that replaced the long-obsolete rimfires, the Original Henry Rifle is built to bring back the ultra-rare “iron-framed” Henry, with a 13 round one-piece octagonal barrel and magazine, American fancy grade walnut stock, a classic folding ladder rear sight and blade front, traditional half-cock safety hammer notch, and no modernized manual safeties.

The iron-framed 1860 Henry rifle was manufactured in less than 400 units, and the Iron Framed Original (actually steel-framed) makes it possible to acquire your own example of this short-lived piece of history.