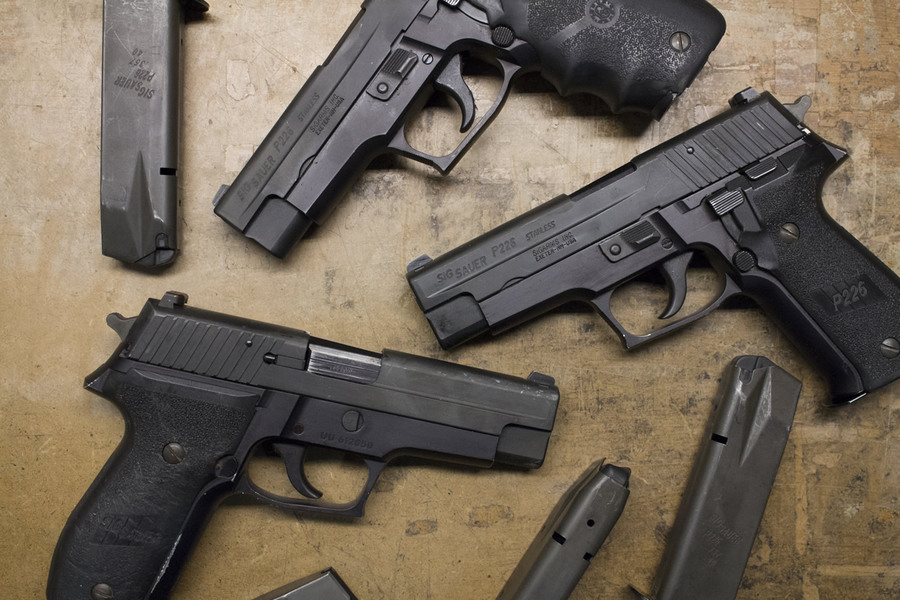 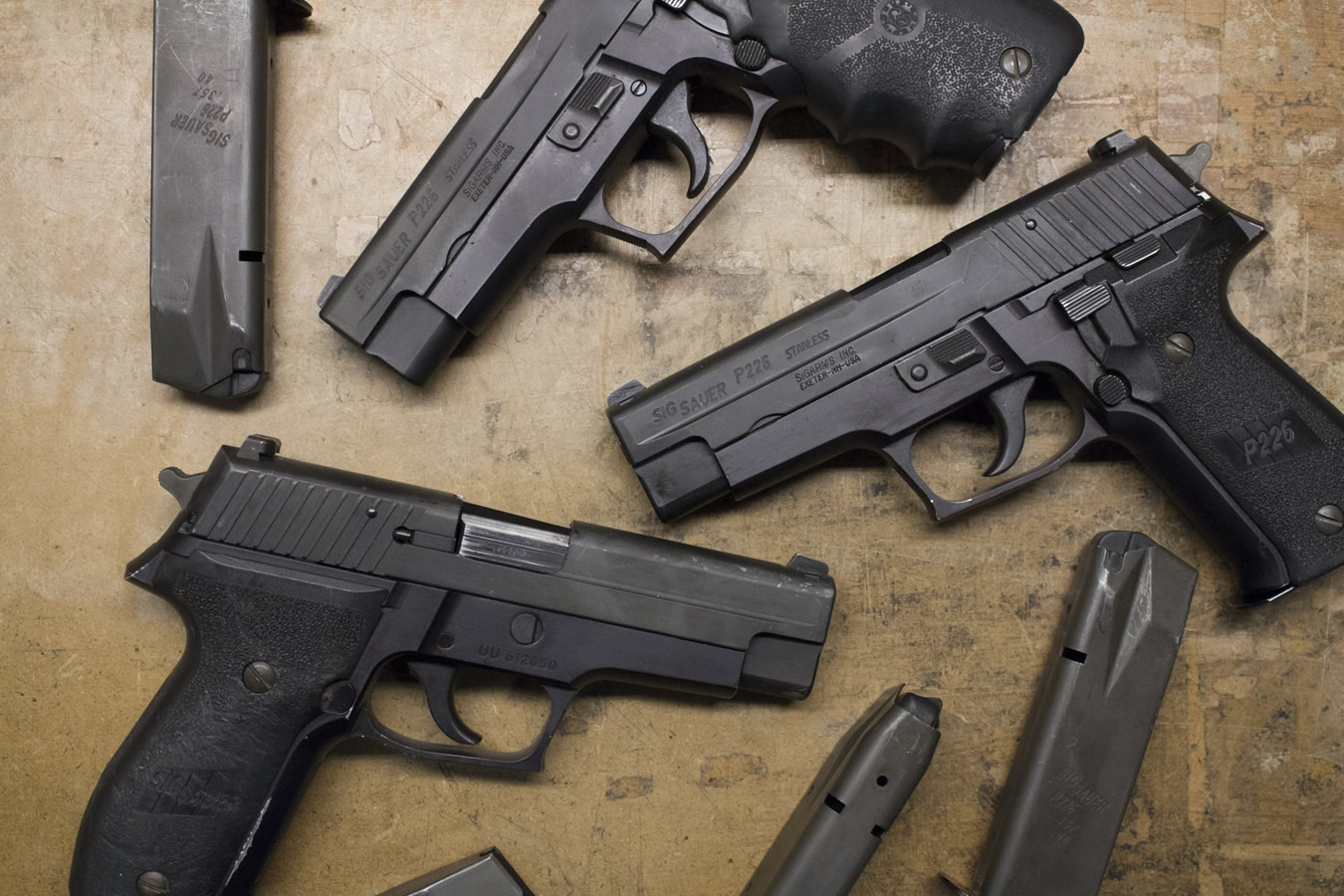 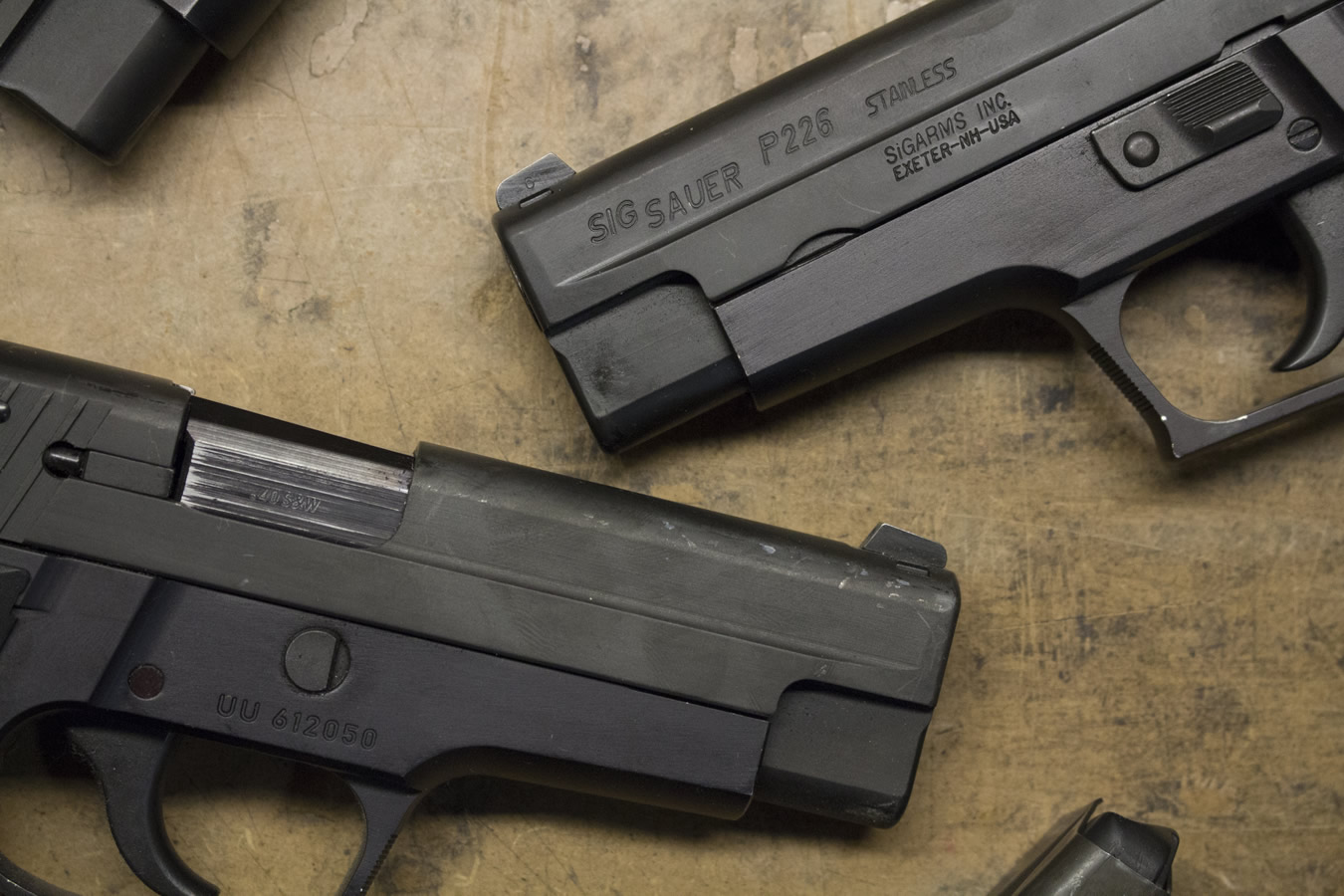 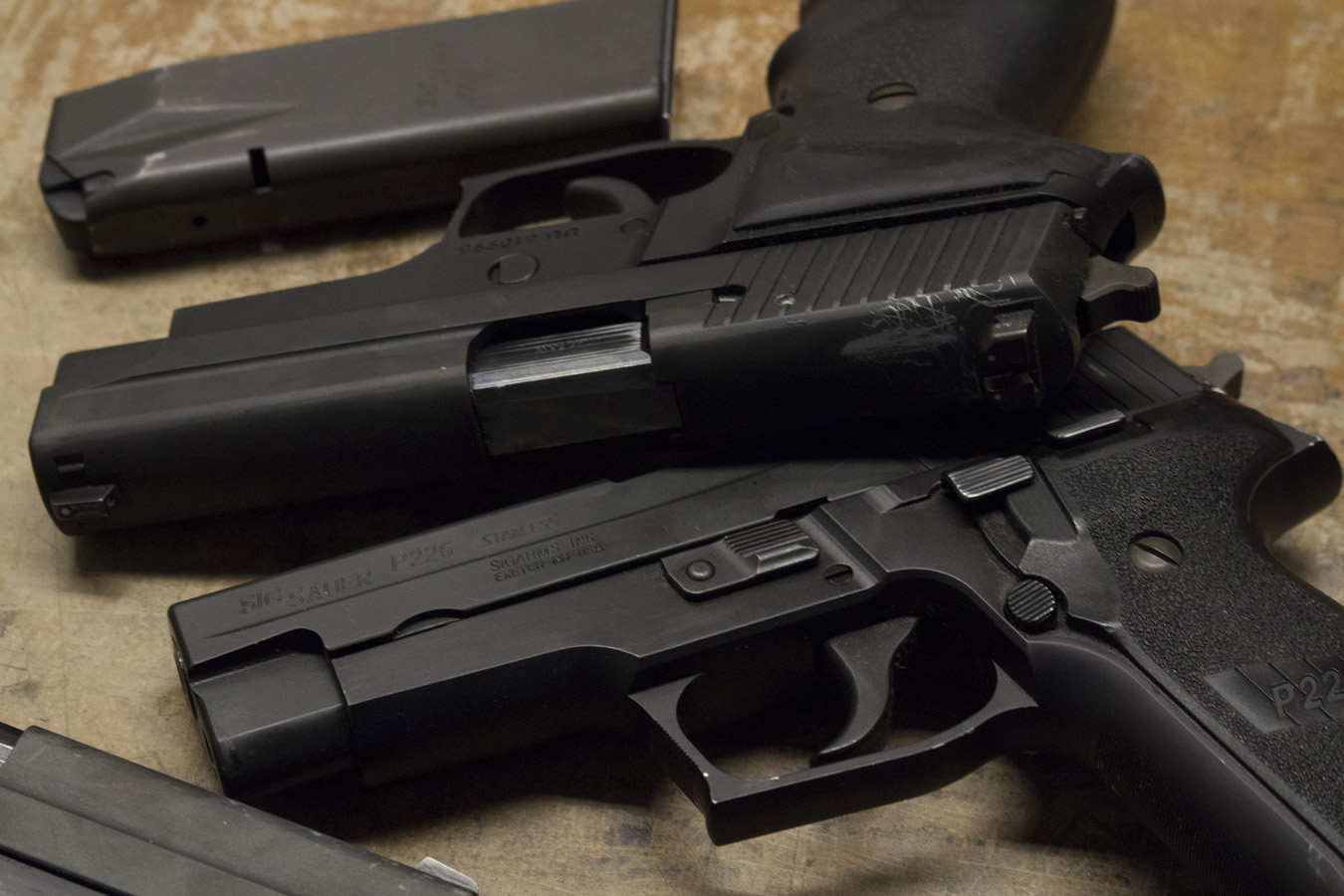 The photo represents the overall condition of these Sig Sauer P226 police trades, all of which are in fair condition.

Price is for one Sig Sauer P226 police trade-in pistol, which comes with one 12-round magazines. As with many used and police trade-in firearms, these may contain scratches and/or holster wear. This is not always the case, but should not be unexpected.

Pistol arrived in fair finish condition. Internally action was a bit dirty and dry. A good cleaning was all that was necessary to smooth everything out. Grips and sights well worn. Weapon shoots flawlessly and is amazingly accurate. Excellent value. Very satisfied with my purchase. Thanks a Million !

Love the pistol I received. I would say in better condition than described, no worries will buy again!

Just picked it up today. Felt really great in my hands. All the edges are broke in from holster wear. Finish is probably 85-90%. Grips are 90-95% Has been shot some, but there is very little wear on the frame rails, slide or barrel. Was a little dirty, cleaned up really well. Functions correctly. Night sights on this particular gun are dim but did charge pretty well on a bright LED flashlight. Good enough to use. Overall, a very nice gun and truly a bargain. Probably the best deal I've ever seen on a good condition, non railed, da/sa 226, regardless of caliber. Thank you guys so much for the killer deal and customer service. WILL be doing more business in the future!

Very good condition, mine obviously has seen 2-3k rounds. The magazine release was converted to left handed by previous owner. Few scratches on the frame but overall VERY NICE handgun for the price.

Initially I wasn't impressed with the firearm, but after a good cleaning an a little polishing it is growing on me. I think I am still going to go for a good model, but these aren't that bad considering the price.

Do yourself a favor Get a good model. Obviously fair means poor. Think after I sell this one I will get a good or very good one. Sportsman outdoors shipped very fast though which was probably the best part of the purchase for me.

First, I can't say enough about the quality of the firearm they say it's fair but it is much better than that. Mine actually came with an accessory rail as well. Wasn't expecting that. Very happy with my purchase, and very happy with Sportsman's. As a matter of fact, I just bought another Sig trade-in.

Purchased this with the express purpose of installing a 357 Sig barrel. 2000 rds later and it still runs like a fine watch. I’ve also ran 500 rds of .40 and it ran perfect. Highly recommended!

If you’re looking for great deal on a P226, don’t miss this one. I was very satisfied with Sportsman's Outdoor Superstore and the product.

Barrel had about 20% finish remaining. Good recoil spring; a shooter not a safe queen.

I first have to say I bought this and an HK P30. Both were police trade ins both were fair condition. I read a few reviews here about how good the pistols looked and how the good plus must be like new. I thought yeah yeah but...they weren't lying this pistol looked better than my HK only a few scratches mainly just nicks on the bottom of the trigger guard. The top of the barrel and the side was a little worn, but like others said I bet the good plus is brand new in box! They have to be! This was in great shape. I usually like cleaning them when they come in and I didn't even have to it was already clean! So clean. I went over it with a q-tip and no dirt or powder anywhere!!!! If I could give this rating more than 5 stars I would! I wish I could post a pic cause it even shot better than the P30! The only complaint I have was I saw it had three mags on Gun Deals but when I looked closer at checkout it said only two mags. Not really a big deal; I'll buy more mags from here anyways. So if you're on the fence get off and pick one up before they're gone! I'll definitely be shopping here from now on! Thanks Sportsman's Outdoor Superstore!!!!

I'll cut to the bottom-line. BUY ONE! The P226 I received can be seen in the top of photo #1 and #3 with the Hogue grips and apparent scratches on top of the slide towards the rear. These turned out to NOT BE SCRATCHES! They were something like lead pencil scribbling, only a bit more persistent. Possibly from a holster snap or any metallic object with a soft metal coating.

As found via field-stripping, there was very little wear observed, and bore was shiny with no pitting. This thing functions as new, also! What else would you expect from a highly regarded sidearm like the P226?

This was a GREAT buy, with great Customer Service by Ally at Sportsman's Outdoor Superstore!! This will not be the last Police trade-in I buy from them. Their firearm Condition evaluations are UNDER-rated, from my experience here. What I received was a diamond-in-the-rough. Just clean it and go!

So, I bought this police issued P226, not expecting much except to dump a bit of $ into it. Apparently there is no need. I was prepared to buy: night sights, an E2 grip conversion, and new mags. It came with 3 mags in great shape, already had the E2 grips, night sights, while dim, still function well enough to be useful, and I couldn't be happier with my purchase. A small bit of wear on the rails, but I grease my Sigs to mitigate wear so, I'm not overly concerned. All in all.....a great Sig for under $500 OTD. Now GET SOME P229S IN!