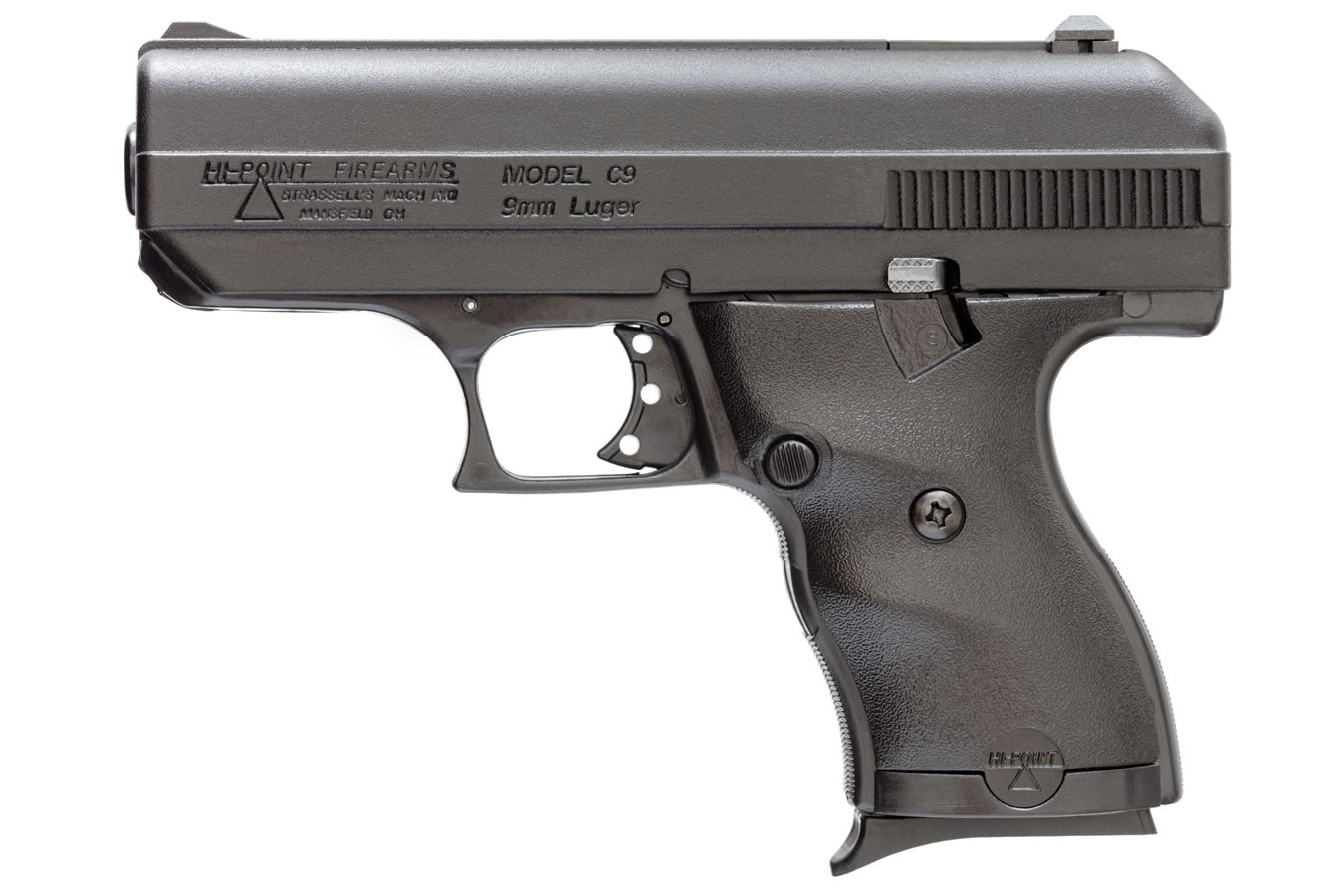 Hi-Point offers affordably-priced semi-automatic handguns in a range of the most popular calibers. Each is sized to assure a firm, comfortable grip and exceptional recoil control, and includes Hi-Point’s lifetime unconditional warranty. Hi-Point handguns are +P rated and accept all factory ammunition. Additionally, every Hi-Point handgun model features:

Hi Point pistols are illegal for sale in the states of Illinois and Minnesota due to "melting point" laws.

Finally got to put some rounds through the C9 and like everybody else said, it’s a good, little, inexpensive firearm that’s pretty awesome. Before shooting it and just holding it in my hand, I had concerns with how large it felt and how cheap the trigger felt. When you shake it, the trigger rattles. When firing it, however, all that kinda went away, oddly. Nice adjustable sight, too. I fed all kinds of ammo through it, even stuff I badly reloaded and didn’t get a jam nor misfire, so I’m pretty happy with that. I have no question about its reliability. Overall, you load it, rack it and it shoots a bullet - accurately! I’m pretty happy with it, and it’s on the Commiefornia-blessed list.

Slide manufacturing is way off the mark. Can’t break it down without 2 people because the slide isn’t aligned with the spring pin. 12 rounds and the inside of the slide is badly worn. Will fire while on the bench with no one touching it. The cost of FFL transfer and shipping is far higher than the value of the weapon. Time to use an 8 pounder and destroy this disaster.

It rattles when you shake it. It’s top heavy. It shoots all day long every day forever. The most awesome dumb great handgun ever! And it’s inexpensive. You must keep a stiff wrist when shooting to make sure it actuates properly. Other than that, it rocks!

I have owned a C-9 since 2005. I originally bought it for house protection, not planning to ever have to carry it. At least once a year, I have run a few boxes of ammo through it to keep at least halfway proficient. It has always performed well with no issues. In that time period, the only cleaning it got was what I could do without disassembling it.
Well, times have have changed and I recently took a class to carry it and learned how to disassemble a gun. To take this one apart you have to drive out a pin that requires the slide locked back PLUS additional pressure to make it accessible. I had to use a vise to do so.
Now that I am smarter, this means I will probably upgrade so field stripping is possible without the hassle. Oh, I will keep this one for sure, but not for carrying.

For a brand new gun with a warranty, I've spent days trying to find a better deal, can't beat the price with free shipping!

After firing weapon, I have decided that it is worth the purchase and will be buying another for my wife. To all the haters, everyone is not RICH.

I've shot a lot of guns and for the money this gun is worth it. Love my C9. Ive let a lot of friends try it out and they all agree its a great gun. Very reliable.

Gun is absolute trash. If youre looking to buy a good self defense gun, you need something that is going to be reliable. Something you can count on when it really matters. This isnt it. Constant jamming. After about 2000 rounds my slide spring is weak and doesnt return. The trigger is gritty and heavy even after cleaning. Its just a cheap Walmart version of something youd should spend more on because its important. Dont be cheap about defending your life. Glocks are pretty mid average price for handguns. Do yourself and whoever else your protecting a favor and buy something that works.

Ordered item on 12/16, received it on 12/19. As I have not fired it yet I cant honestly rate performance. It feels comfortable in my hand and the indentation in the trigger guard makes for stable handling. As this purchase is for for security, I will be purchasing another item from this manufacturer for hunting early in the new year. Thank you for a great product and keep up the good work.

This pistol is a great firearm and my father really loves it as much as I do.

I've owned a Beretta prior to this, loved that gun too, but for the cost of this one, there is no comparison. If I closed my eyes and someone handed me this gun and told me to fire it, I wouldn't know the difference. The recoil is smooth, trigger feel is light, weight is a little different, but it's a only few of Ozs no big deal.
The only issue I had was firing re-loads, it jammed a few times. I blame the re-loads. Otherwise, any fresh ammo no problem. Great gun for the price, hands down!

Three years ago I was looking for a budget 9mm gun and was leery of the really cheap price for a 9mm pistol. The YouTube reviews convinced me to get one and I’ve never looked back. It shot great out of the box and out of 250+ rounds I’ve had one failure to feed due to a flat nosed round. Sure, it’s not the prettiest gun and the balance isn’t great, but the grips feel good and it looks intimidating if you’re looking down the barrel of one. I’ll probably get another one just to have another gun after I add a couple more to my limited collection. Guns will be like Krugeerands at some point. Other cheap guns I like are the Phoenix Arms HP 22, the Armscor M206, and the Kahr CW9 - all California legal, which is required for me. If you have a problem with a Hi-Point they’re customer service is great by all reports and it has a lifetime guarantee.

The Hi Point C9 is a nice firearm it has nice recoil, shoots flawless. I love it, I’m a family man on a serious budget, I don’t need nothing pretty, even though I like the way it looks, all I need it to do is shoot and put a hole in an intruder. I’ve put about 200-300 rounds through it. Once I put about 500-1000 rounds through it I’m just gonna keep it put up. I strongly recommend this gun.

The slide bugs me a lot because it comes all the way down to the trigger guard. Had to completely adjust my grip with left thumb on side of trigger guard and left index wrapped all the way in front of the trigger guard. Every gun is different and you just adjust to it. After over 500 rounds my modified grip is now automatic pun. Had to send it back to the manufacturer to fix multiple cycle issues. Free lifetime warranty. Now it's happy and I am happy. If this was the typical $300-600 price I would be furious and give it lowest possible marks. But it's a bargain gun with a fine trigger and it hits the target very well.

Not sure why people put down Hi-Point. This is a good gun for the price point. Out of the box it shoots great and this site is awesome had the gun over night.

First and foremost - Sportsmans - great job, fast shipping and the best price including shipping in town. I don't understand all the hate for this firearm. I purchased one and I have yet to have a problem with it. Haters say - gun is ugly. What since when are guns supposed to be pretty or cute? Gun is heavy - if you think 29 oz is heavy then it's time to hit the gym. My wife @ 54, a buck 30 soaking wet doesn't think it's heavy. Not too big or heavy for me to CC. God willing I never need to use this but if I do, I don't think the perp is going to say, aw man, do you have to shoot me with such a heavy and ugly gun. Besides, I'll make sure to put pretty bullets in it. LOL

I purchased a Hi-Point C9 to take kayaking with me because I didn't want to take any of my nice firearms on a kayak. So I did some research and found the most inexpensive handgun with good reviews and it is a Hi-Point $139. I have about 150 rounds through it without any trouble. It is accurate, soft shooting, American made, I like the red/yellow sites and feeds 115g, 124g, 147g and even lead reloads without any issues. It is more than I expected and would recommend it to anyone that wants an economical firearm that will shoot when the trigger is pulled. It is not a carry gun - way too heavy for that and it is no Walther PPQ, but again it was $139. I give it 5 stars because it simply performs exactly what it was designed to do. 5 stars to Sportsmans as well, this is my second order from them and they process / ship quickly as well as best price for the C9.

Bought it as a Christmas present for my wife, she only shoots a few times a year so I didnt want to spend a lot but after getting the gun I am having thoughts, maybe after shooting it I will feel better about it, The gun is very heavy and feels a bit unbalanced but as I said I have not fired it yet. The Customer Service at Sportsmans cant be beat I ordered it on a Sat night, got the shipping info on Mon morning and picked it up from my FFL on Wed afternoon Thank you, getting ready to buy another gun just as soon as its in stock

Sportsmans did a great job. Very fast shipping and the best price including shipping. I purchased this for my wife. The weapon it self is very heavy. I knew this going into it. But, until you hold it you have no clue. The weapon is very good quality solid. I will purchase another Hi point. After holding and firing this isnt the weapon for my wife. I need to find something that is much lighter and not as fat.