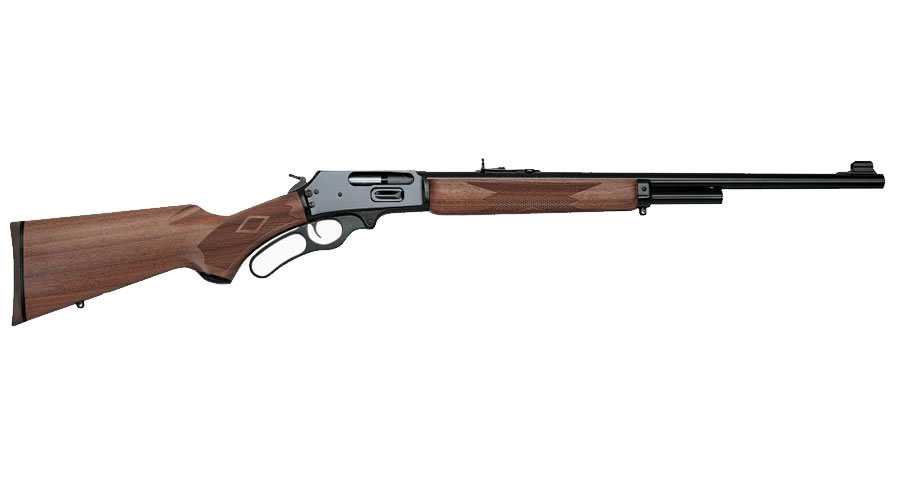 The tried and true configuration of this famous 45–70 rifle. It features a 22 inch barrel with deep-cut Ballard-type rifling and an American black walnut pistol grip stock with cut checkering and swivel studs.

I Really love this Marlin Lever Action 45/70 and I wouldn't say that if it had any short comings. I thought that it might kick the livin crap out of me, but a nice gel pad on the butt stock that actually lengthened the pull for me, which I needed, and I can shoot this Bulldog for hours without hurting my shoulder.
It does Buck a bit when shooting off the bench bags, but when I pull the trigger on a whitetail deer I don't even notice it. I've killed one deer with it last year and it made one hop and dead right there. The exit hole was to say the least Devastatingly Large using Hornady Lever Revolution FTX 325gr. ammo. Very accurate and this Bad Boy is my new favorite brush gun.

I've always wanted a Big Bore rifle and I've always wanted a lever action, this rifle fits both of those. I gave this 1895 Marlin 45/70 and overall rating of 4 because there are a few issues I'd like to point out.
#1- The trap door for loading the ammo was super stiff and I found a fix for that on a Marlin Owners website.

#2- Evidently there was a burr that was scratching my brass and which also caused issues with the last round in the tube not wanting to chamber. So I used a 12 GA. bore brush with some light grit sand paper and my cordless drill to polish the chamber throat, I also found this bit of info on a Marlin Owners website. After polishing the throat chamber and a thorough cleaning afterwards, every round chambers smoothly and not as much scratching of my brass, and because I do reload for everything that I own this was definitely an issue for me.

#3- Even though I put a scope on this rifle with High Rise mounts, I still want the capability of shooting open sights by looking under/through the scope rings, and the iron sights that come on Marlin rifles are a bit hard to see. It would be nice if Marlin would put the fiber optic TruGlo style iron sights on their rifles, but sadly they don't and I've been looking into after market options for that. With that said, I mounted my Nikon 3-9x40mm BDC scope and bore sighted it by pulling the lever and bolt. There are YouTube videos on this and bore sighted it down my hallway at about 12 yards. Everything looked fairly close so I went to the range the following Saturday. My first shot at 25 yards was dead center left to right and about 3 low of center. I was Amazed at how close it was and thought it might be a fluke since this beast of a gun bucks so hard. So I fired 2 more rounds off the bench and all three shots produced 1 ragged hole group. I raised the scope adjustment up about 2 1/2 full turns 1/4 @ 100 yards, do the math, and my 4th shot was nearly dead center of the Bull.

Hope Ya'll find this info useful and if you Think that the 45/70 isn't capable of taking game at 200 yards, Think again. An average whitetail deer is about 18 from the top of its back to its belly, a 200 yard shot at a whitetail deer if aiming just below the spine would produce a smack down shot right in the boiler room. I'm extremely happy with the accuracy of this rifle! I hope and pray that I get a chance at a whitetail this year with this rifle in my hands. Go get Ya Sum!!

I Actually struggled a bit with myself on this purchase. I had a bad experience with the accuracy of a Marlin 336 model in .35 Remington that had a problem with grouping..........very, very poor. Sent the rifle back to Marlin that had actually been bought out by Remington and they re-crowned the barrel and sent it back to me. After trying 3 different brands of factory ammo it still would not shoot a decent group so I opted for a refund. Needless to say I was very hesitant to buy another lever action from Remington/Marlin...........but I decided to take the plunge and give them another chance.

Well, to my surprise this 1895 45/70 is Everything I had hoped for. I mounted a 3 x 9 x 40 Nikon BDC reticle scope on it, bore sighted it right here in my living room using a bow target down the hallway at about 30 feet and my first shot hit dead center of the bull but about 3 low. I was completely amazed at how close I got on the first shot. Just to make sure the first shot wasn't a fluke I put 2 more rounds down range which produced one ragged hole. I made an adjustment with the scope to bring it up a bit and punched the target at 25 yards nearly dead center of the bulls eye. I am so pleased with the accuracy of this lever gun and have fallen in love with it.

I can't wait for fall to come and take some deer with it. This is a quality lever action rifle for sure and Sportsman's Outdoor Superstore made it affordable and with the free shipping, no taxes to Missouri where I live I just couldn't find a better deal anywhere on the net;nad it was at least $100 bucks cheaper than the Henry that I was also looking at and the magazine capacity was larger on the Marlin.