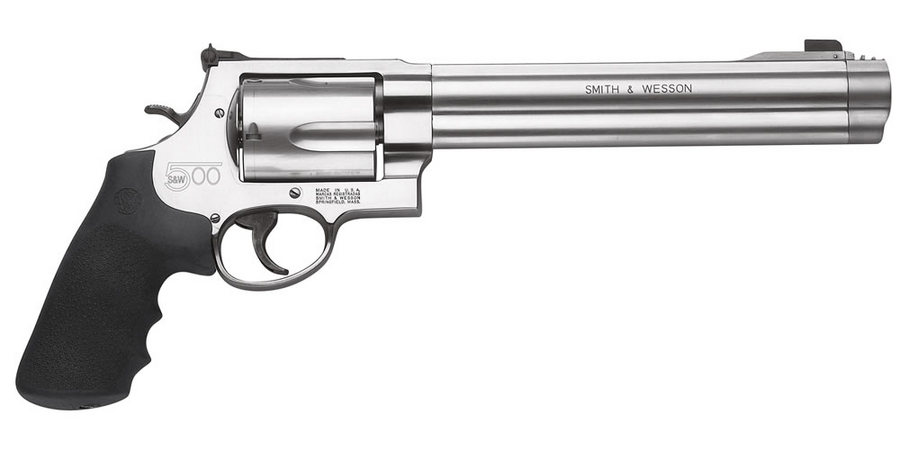 In 2003 the gunsmiths and engineers at Smith & Wesson wanted to deliver maximum power for serious handgun hunters. The power they sought required an entirely new frame, the massive “X-Frame™,” and was the basis for the new Model S&W500™, the most powerful production revolver in the world. This ushered in the era of the “big gun” and was only the beginning.

For ultimate power and velocity there’s nothing even close to an X-Frame model handgun.

I would have to say, one funnest Pistols I have ever fired. Extremely accurate, recoil is easily managed if you have some strength, in your hands and arms. Pure sweetness! I may have to kick my wife out of bed and sleep next to S&W 500 Mag, I have to be honest, my wife is a lot funner to cuddle with!

If you ever find yourself being attacked by a T-Rex, this is the gun you want on your hip! I have owned this cannon for about 5 years now. It is an absolute blast, no pun intended, to shoot. I will echo what another reviewer has already said. This is NOT a gun for novices!! I don't even load more than 1 round when I let other people shoot it, and I usually never use more than a 350 grain round at the range. Besides being very expensive, 700 grain rounds will rip your wrist off and they're no fun to shoot!! Well, more than maybe 1 or 2. lol. If you have $1K laying around doing nothing and you want something totally ridiculous but fun to have in your gun safe, this is the cannon for you. Just treat it with the respect it deserves! This one will bite you if you don't.

Amazing weapon. I can hit accurately to 50 yards. I reload so it's not as expensive to fire. It uses a lot of powder.

I have had this for about 8 months. It is a hand cannon. The rounds are not cheap, but damn, it is fun. I can only shoot a few rounds before my hand is too sore, but at 150 I have no problems hitting the silhouette. And the bullets really leave a large hole in the target. lol.

I recently purchased this hand cannon and received it yesterday. I also purchased the 500 grain ammo to shoot with it. All I can say is WOW!! The gun is very powerful and the weight of the gun helps with the recoil. With the 8 3/8 in barrel the recoil seemed to come straight back as with a rifle and not so much up. DONT BE FOOLED... IT HAS RECOIL!!! I love it!!!

I have two of these minature cannons they take some getting used to but leave a thrill, highly accurate and for the serious hunter who is looking down a Grizzly Bear in the back country. This firearm is not a beginner or even a medium shooter, its for the serious shooter who shoots the the 338 Magnum rifle loads....the S&W 500 is a Beast.