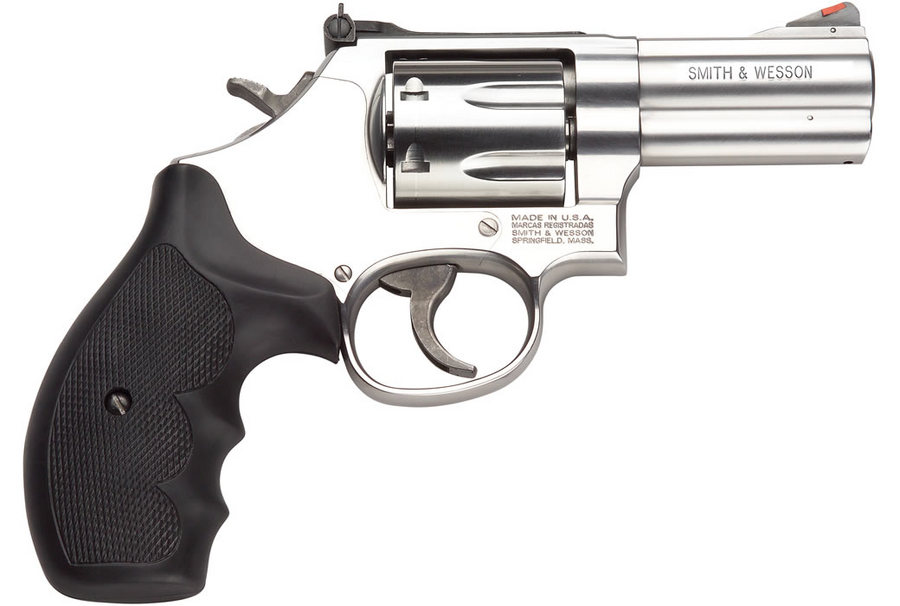 Write a review
(4 out of 5) Perfect Personal Defense Revolver
by Tom from Chicagoland, IL on March 18, 2019

I received my 686 Plus 3 in revolver recently. This is my third 686. I was concerned at first because there are few cosmetic issues, but no canted barrel or other defects which could affect function. Setting that aside, I took it to the range for a workout. I fired several cylinders with everything from 38 Special to Buffalo Bore and federal HST 38 +P to Remington golden saber 357 Magnums. The revolver performed without a hitch.
At about 22 feet, it was most accurate with 38 Special, with all rounds hitting pretty much in or around the bullseye of a 12 by 18 inch splatter target. As expected, the 357 Smith & higher-powered 38 struck somewhat lower. It was very accurate. 38 specials out of this is like shooting 22s. High-powered Buffalo Bore 38 Special + p hollow points gave very little recoil or muzzle rise. I was completely in shock at how well it handled 357 rounds. It handled them nearly as well as my 686 Performance Center with a 5 inch barrel. Recoil and muzzle rise with full power 357 was less than I have experienced with a lot of 9 mm semi-automatics. I fired two cylinders of 357s as fast as I could pull the double action trigger, and every single one of them hit the target, which is about the size of a small adult abdomen. Over half of them would equate to heart or lung shots.
Owning three Model 686s, I might seem a bit prejudiced in their favor, but there is a reason I own them. I highly recommend this revolver for personal or Home Defense use. Lastly, I would be remiss if I did not review the trigger. As expected, this is nothing comparable to a performance center trigger, but the double action pull, which I guesstimate at approximately 10 to 12 pounds , is extremely smooth, and should lighten down to around 9 lb after firing a few hundred rounds. It is not a stagey trigger, and it is much better than the Model 66 I owned a few years ago. It is not entirely different than the double action pull on a Sig Sauer P226.

What can I say about this wheel gun from the largest producer of hand guns in the United States of America. I couldn't be happier with its performance and build. This three inch 357 Magnum 7 shot revolver makes a great addition to my collection. The size is perfect and versatile that you can use for personal protection, home defense, backwoods camping/hiking or range gun. With the right ammo such as Underwood Extreme Penetrator or Buffalo Bore Hard Cast bullets, I feel confident and safe taking it camping/hiking in the backwoods should I encounter a brown bear charging towards me and need to defend myself. With a revolver, I don’t have to worry about miss feeds, failure to eject or other malfunctions that can occur with semi autos. I know when I press the trigger it will go BANG every time.

I also cannot express the excellent service I get when I order from SOSS. This is my seventh purchase and I couldn't be more pleased. Shipments have been fast, communication is great and prices are the best around. SOSS has been and will always be my go to store for all online firearm purchase.