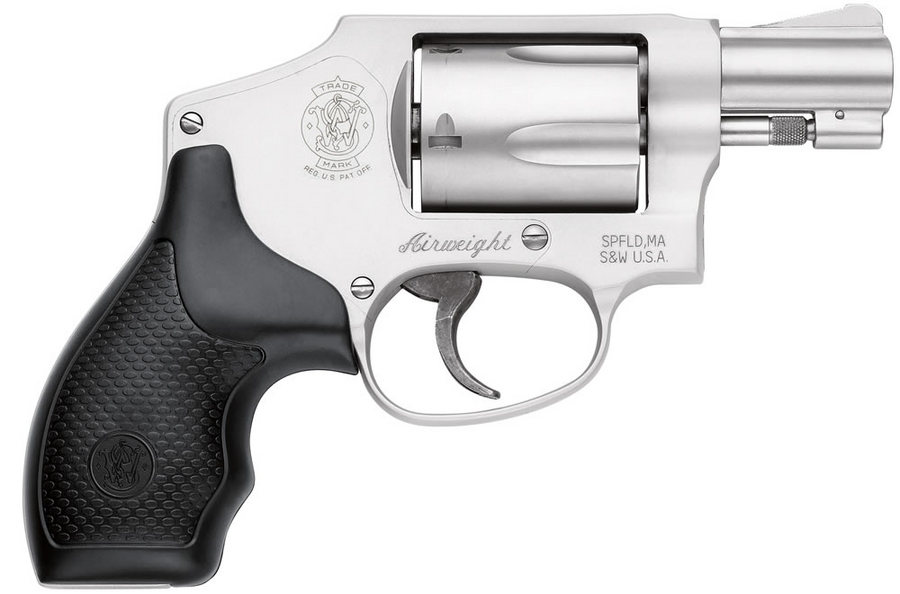 With decades of reliable performance to its credit, Smith & Wesson’s 642 J-Frame remains among the best and most popular small-frame revolvers on the market.

I use to have this exact same model with the stupid Hillary Hole safety lock. I sold it out of principle and snapped up this one WITHOUT the stupid lock hole drilled into the side of the frame. I really wish S&W would get rid of these abominations or just sell them to commie states and let the rest of us have guns without the lawyer locks. And there are documented cases of these locks disabling the gun inadvertently, especially in the Magnum calibers.

Anyhow, I like my no lock 642 so much that I want to get another one or the 442, which is also available sans the lock. These handle +P no problem, although a steady diet of them probably isn't a good idea. Sight it in with your chosen +P carry load, and then practice with regular .38 fodder. I DO carry mine with either Federal Hydro-Shocks +P JHP or the Remington 158-grain +Ps, LSWC.

One thing to be aware of when shooting this DAO revolver is to make sure that after taking a shot, you always let the trigger back out all the way forward before taking a subsequent shot. Trigger isn't bad, but there is a little stacking, but it gets better the more you shoot it. Not really a target gun per se, but if you are going to carry this and possibly have to stake your life on it, you MUST practice, and practice, some more.

Don't just buy it and stick it in a drawer and forget about it. Get familiar with it, learn the trigger, how to reload under stress, and SHOOT IT. It also doesn't hurt to dry-fire it either. This helps break it in a little better too, but ALWAYS do so safely. I highly recommend these NO LOCK 642s.

The gun arrived and looked dirty, almost used I had to clean it up when I got home from FFL. Also, it has tiny micro scratches in a few places on the aluminum frame. I really wish this website would do a better job of inspecting their guns before they ship them out. Overall this website is a good one and I will be ordering more guns from them. I’m chalking this onto a fluke.

Gonna keep it short and sweet. Get one if you can. This is one sweet revolver. I am currently carrying mine as backup / ankle gun with a bugbite ankle holster highly recommended FYI to compliment my department issued M&P 2.0 9mm. Fits snugly and pretty much disappears on your person. I keep this by my wallet and phone, and when i just wanna roll out quickly. It fits right in any pocket and you forget it's there. I do recommend some sort of pocket holster simply for safety purposes. I also bought the silver 642 model for my 65 year old mother who lives alone and needs something for EDC and home defense. My mom wanted something to carry but she is afraid to carry with one in the pipe w /o a safety. Plus I was scared she would actually remember to rack the slide when / if it came time to rumble !! She felt comfortable with this setup immediately. She's gonna carry it in a cheap little Walmart makeup bag in her purse. If you're looking for something for the woman in your life that she wont be intimated to carry EDC, this is the one !! No slide to rack or magazine to load. Just drop and go easy breezy. Hard to mess it up. This thing is Ready to roll right out of the box, super easy to setup for first time EDC user or experienced gun enthusiast. Loaded up with Hornady Critical Duty .38 special and we are in business. People knock the whole 5 shots thing , but most gun fights are 2-4 rounds. I trust my life with it as a current LEO if / when it comes time to go to the ankle on or off duty.

(5 out of 5) Outstanding Product, Great Price
by Jonathan from Albuquerque, New Mexico on April 4, 2017

What can you say? it's a S&W revolver, so of course the product is great. What is unexpected is to buy it for nearly $100 less than I can find it anywhere else! Shipping was delayed by a couple of days due to high volume of orders, but I'll wait 2 days to save 100 any time. Great price, good service. Will definitely buy here again.

Best price I've seen for this handgun. Very solid build and excellent fit and finish. This was my first revolver and the first outing with it I was hitting bulls eyes at 7 yards with moderate concentration. So this gun is plenty accurate as long as you do your part. The trigger is smooth the whole way through and will only get smoother the more you fire it. It is a great pocket carry gun. Super light.

Best price, great product, Vert quick shipping. And they keep you updated via email. I'll buy all my firearms from the outdoor super store