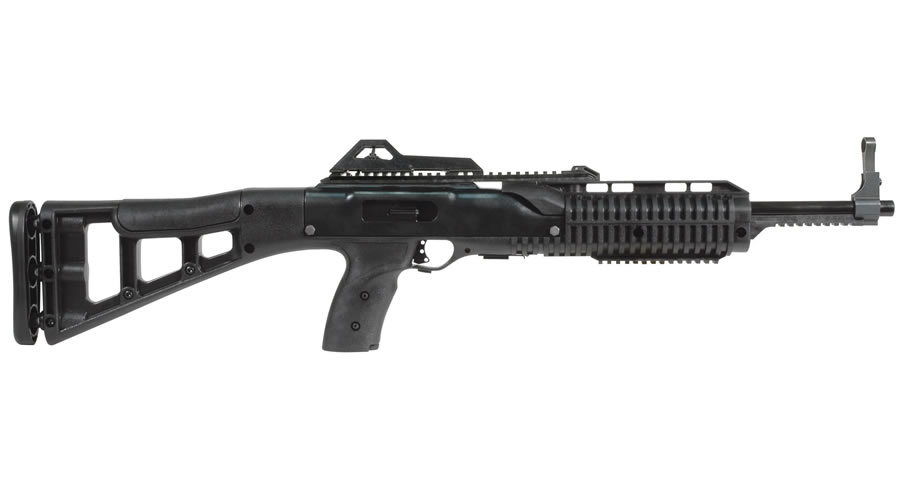 Hi-Point never makes you choose between reliability and affordability. Their quality control measures are second to none. Each Hi-Point firearm is test fired prior to shipment to ensure proper and safe functioning. The result is high customer satisfaction, and one of the lowest return or repair rates in the industry.

They have re-engineered their rugged and reliable carbines to deploy some serious attitude. From butt plate to front sight this distinctive new Hi-Point carbine virtually shouts CAN-DO!!

Hi-Point 45ACP carbines are +P rated to accept all factory ammunition and feature:

Read numerous reviews and watched several videos on the .4595TS and bought 4 of them for my sons and I. After the first time at the range, was a little disappointed in the iron sights, but an easy fix with a red dot optic and was grouping “doorknob”sized groups at 50 yards ! That is great for a carbine that costs $400 !!

Along with some moderately priced ARs, I have the 9&10mm carbines. Blast to shoot, and fun to camo paint because not defacing expensive gear. These folks have the BEST C/S in the business. All he need to do is have them fix his problems for the reasonable price of FREE.

5000 rounds, from cheap reloads, to name brand ball, +P and even 45 Super +P+...It eats them all. Zero jams. I have had issues with the expanded capacity after market mags, but NEVER the gun itself. Range fun, defense, hunting. 100% all good.

As a long-time competitive shooter where tack driving weapons are the norm, the 4595TS is not only a formidable defensive weapon, but a blast to shoot. While many look down their noses at Hi-Point weapons, their foresight in producing a full range of pistol caliber carbines has now caused an industry wide scramble to not get left behind. Considering the knock down power of the 45 ACP fired from a standard 1911, factor in the ballistics of the extended barrel, and the 4595TS should be on everyones list for home and family defense, and much cheaper than a Thompson!!

I bought two because they were so inexpensive that I could not resist. I have fun with my sons using both of them for contests. And a .45 carbine is just plain fun!

My wife and I just added a 4595 to our collection. We already own a 995. We have put thousands of rounds through the 9mm and just 100 rounds through the 45. You are not going to get a collectors gun for $300 .... but, if you want a fun range gun or home defense gun then these are the shit! We feed ours cheap new ammo and have NEVER had a Fail to feed or a fail to eject. One of 3 45 magazines was sticky but a shot of dry silicone fixed that. People who want a $1000 gun for $300 go elsewhere. I'm looking at adding a 1095 to the collection and will have three carbines for under that $1000 mark. Not to mention, they are a pain in the ass blast to clean!

If you want to through lead down range, this weapon will work just fine. If you are expecting a quality fire arm than keep looking. Triggers are all the same from one Hi Point to another aling with many other parts. Thus is to keep costs down. Trigger pull was stiff and had 6 distint stops along the path of travel. Fun to shoot, yes. But save your money and buy a carbine you will be proud to pass on to your grand kids. This is not it

No it isn't. TONS of failure to ejects. Enough said.