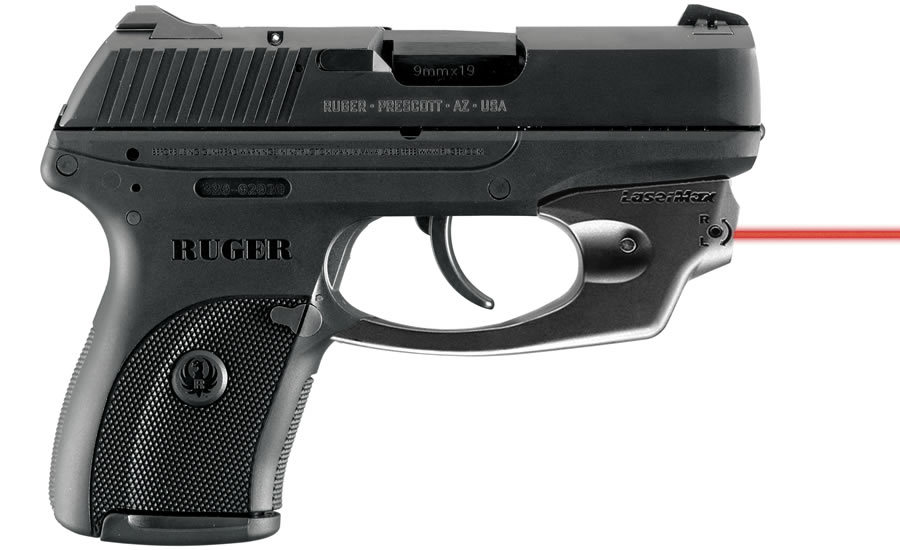 The Ruger LC9 Lasermax model is a double-action-only, hammer-fired, locked-breech pistol with a smooth trigger pull. Control and confident handling of the Ruger LC9 are accomplished through reduced recoil and aggressive frame checkering for a positive grip in all conditions. The Ruger LC9 features smooth melted edges for ease of holstering, carrying and drawing.

One seven-round, single-column magazine is provided with each LC9 pistol. The magazine’s standard flat floorplate aids concealability, while the provided finger grip extension floorplate offers an option to shooters who prefer a longer grip surface with more hand-to-pistol contact.

The CenterFire series lasers have a simple toggle switch activation for right and left-handed shooters. Like other LaserMax products, the exclusive ambidextrous, distinct on/off switch turns the laser on only when needed so it will not inadvertently reveal the user’s position.

The CenterFire laser uses a 1/3 N Lithium battery that provides over four hours of continuous runtime. Although pre-aligned at the factory, the CenterFire is also user adjustable for windage and elevation.

The Ruger LC9 LaserMax model is compact and just slightly larger (less than 1 inch in both height and length) than the popular LCP. Its rugged construction consists of a blued, through-hardened alloy steel slide and a black, one-piece high-performance, glass-filled nylon grip frame.

Overall, the gun is good. Compact, to the point of nearly being a pocket pistol. Lol Came with laser and all magazines have pinkie finger extensions. One star penalty for trigger pull length. So I installed Solomon Short Stroke Trigger kit, which made a world of difference. Between the Laser & TruGlow night sights, this is a great bedside gun for night time defense.

I love the way this thing feels and performs. It's been flawless for the first few hundred rounds.

I use this for my conceal carry weapon. It's easy to conceal and it fires great.

Bought three online, for my wife, myself and a friend. Shipping was fast and the tracking information was updated often. The LC9 came with the holster, extra clip with pinkie extension and other goodies. I've run about 50 rounds through it both using the laser and iron sites. Laser was good right out of the box, iron sights are not bad but, not adjustable like the laser. Over all this is now my every day carry weapon. Great price for all that comes with it. Definitely a keeper.

GREAT AMERICAN MADE PISTOL AT A VERY GOOD PRICE, RIGHT OUT OF THE BOX LASER WAS ONLY OFF 4 INCHES AND HOLDS A TIGHT GROUP. VERY PLEASED WITH THIS LC9 FOR THE MONEY.

Superstore has the best prices hands down. Great customer service. And super quick shipping. I cannot see buying anywhere else.

Fast shipping and good comunication. Ordered it on a monday night and had it in my hands thursday afternoon. Have not shot it yet but you know its a ruger.