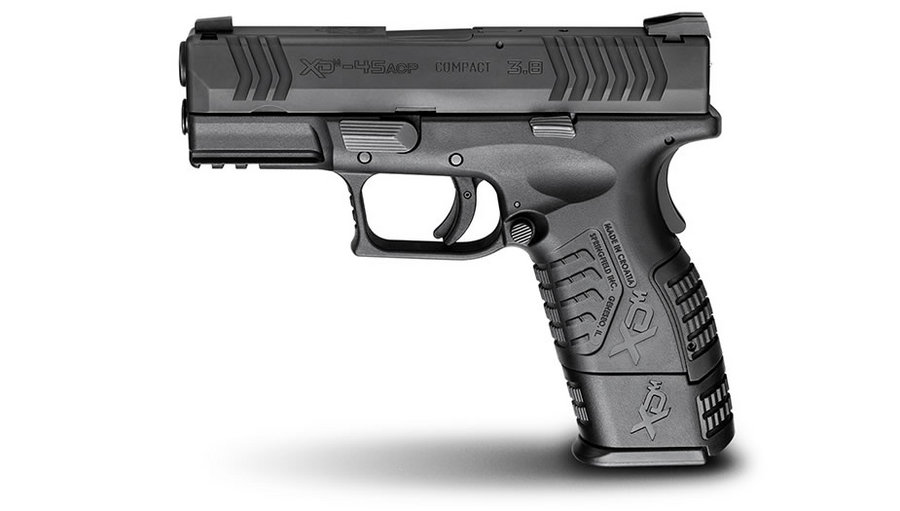 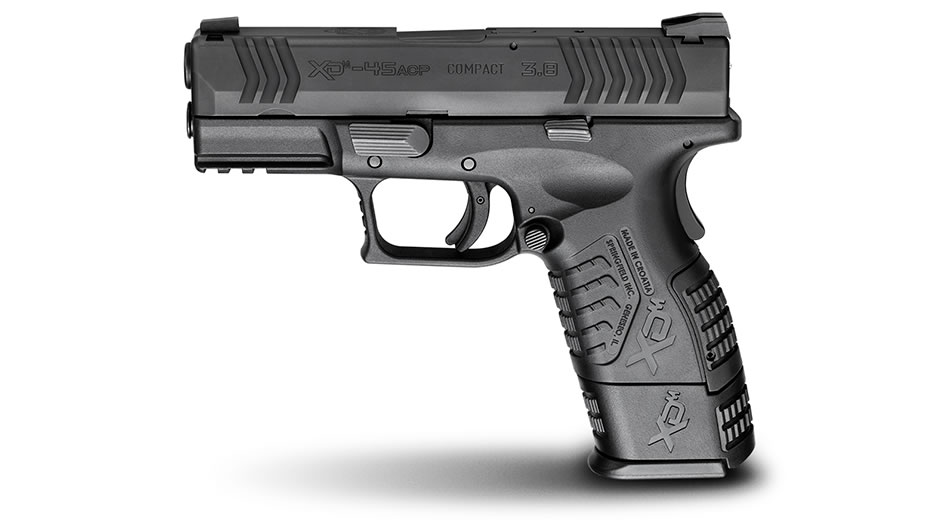 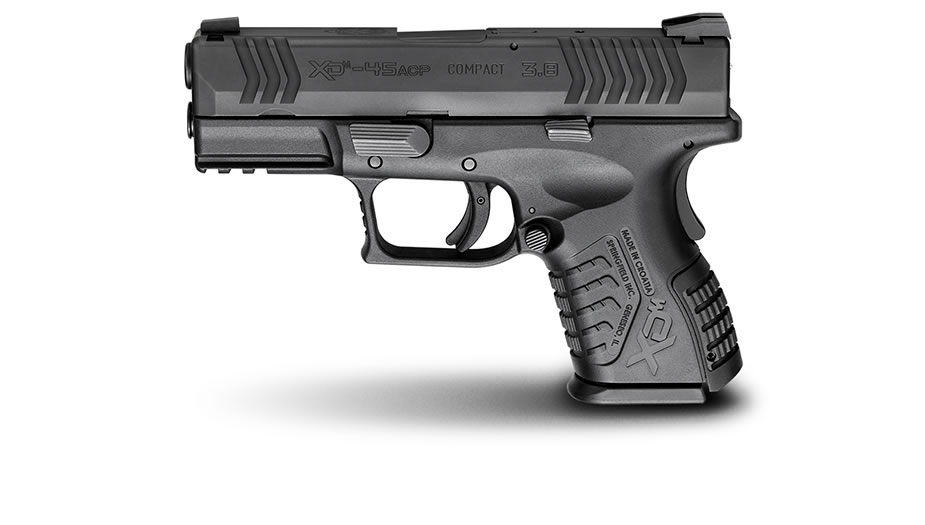 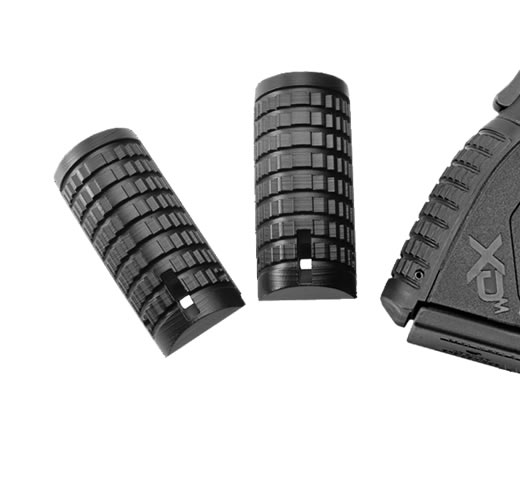 The XD(M) 3.8” Compact is the smallest of the XD(M)® line, but it’s by no means the least. It boasts the same superior ergonomics, reliable performance, and features that make larger XD(M)®’s easy and intuitive to use in a slightly abbreviated package. And you’ll be amazed at how fun it is to shoot.

The XD(M) 3.8” Compact .45ACP has a 3.8 inch barrel mated with a shortened compact frame. When combined with the versatility of XD(M) Gear X-Tension magazines, the XD(M) 3.8” Compact .45 is ready for daily carry or a day on the range. Put in an X-Tension magazine, and you have a 13 round full-sized .45ACP pistol. Use the flush-fitting 9 round magazine, and you have a Compact.

Like all XD(M)’s, the XD(M) 3.8” Compact comes with three interchangeable backstraps, dovetail sights, mega-lock frame texturing, an ambidextrous magazine release, a multi-position frame rail, and a match grade barrel. You’ll also find all the safety features that make the XD(M) a safe pistol in responsible hands.

Your total XD(M) experience starts the day you open your case. In fact, it starts with your case. The rugged Multi-Use Carrying Case is as durable as the XD(M) it houses and can be re-tasked to protect any number of items from a laptop to multiple XD(M) pistols.

Usually, handgun customization is an after-market decision. With the XD(M)®, you get more personalized choices for a custom fit right out of the case. 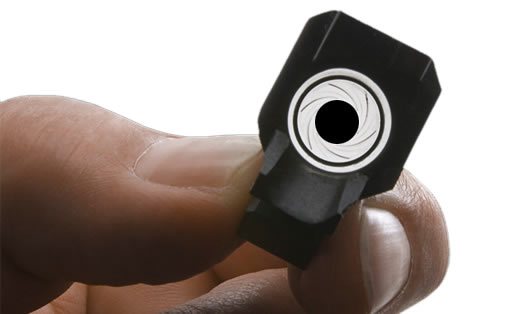 This was an amazing firearm. It is a shame it was discontinued.

I like the XDM compact very much, however, it would be a better gun with night sites. The push back is very light for a .45. In fact, I shoot a better pattern with the .45 than my 9mm.

Shipping came to my FFL fast and broke her in without any problems thus far at the range. Best price I could find on the internet.

So far I've put a box of 50rds threw it. God what a sweet shooting gun!!! I've got every gun you can think of! And I still rather carry this one! Haven't had any!! Problems at all. The gun came in two days, the gun was NEW!! And it came with everything Springfield has to offer in the box with it. This gun retails for $800.00 bucks!! And I got it for $547.00!! What a deal. Made the ffl mad that I was able to get the gun for what he gets them for lol. $25 bucks to get it out in my name, and I'm a happy camper. This is one gun that can fit in the back pocket without any probs. Now if I can learn to hit that armadillo at point blank range lol. Did I mention this is a sexy gun

I am very pleased with my order. Could not have been easier or faster. Ordered with express shipping and the pistol was in my hands less than 24 hours later. Pistol looks great. Shoots great, very happy. Thank you.

No issues, good company to buy from! Best price. Only problem was on my end. Buying another gun from these guys asap

Gun was a bit too big for a backup but what a great excuse to buy another gun!

I paid $559 for this gun with free delivery to my local FFL. It shipped the same day and arrived at my FFL in 2 business days. I got a little worried when I read someones review that said they got a used gun from SOSS. First thing I did when I arrived at the FFL was to inspect the gun and the packaging thoroughly. The spent casing was dated 2/14/2014 so it was only about 3 months old when I got it. Took it to the range and it hit where I pointed it. Nothing like my Sig P250C .45ACP. That gun is junk compared to my XDm. I would definitely order from SOSS again and will most likely get a Springfield 1911 Commander Model .45ACP.

Great gun, i got 45 ACP. for a compact gun it is not hard to handle. the x-gear with the weapon is very nice. This is my second XDM compact and love both

I went to purchase this fire arm from Sportsman but when I did it was out of stock. So I went to Kentucky Gun company. After 4 days of waiting for them to at least get the order I had enough. Got a notification from Sportsman saying it was available Thursday night so I went and canceled my order with KYG and purchased it from Sportsman. It left the shop on the same day I purchased it and received it 3 days later. Im happy with the purchase & the gun!!!. Will definately be doing more business here in the future.

I mentioned that I had a failure at around 400 rounds, I have discovered that it was not the gun, but the ammo I was using. It was TULAMO BRASS. It did the same twice in a session at around 700 rounds. I have never had any type of failure with any of the other ammo. it was a FTF...I would recommend this gun to anyone...

This is the second firearm I have bought from SOS. Completely satisfied once again. Friends and family have been referred and have made purchases as well. The XDm .45 performs great with little kick back. Pearce grip extension for little finger recommended on 9 round magazine. Have to purchase XD version as they do not make one specifically for XDm .45.

It took my about a year to decide between the XDm 45ACP compact and the XDs 45ACP. The reason I chose this one was because of the 13 round magazine which gave me the extension. After 750 rounds through the chamber and one failure the slide did not go all the way at around 400 rounds no big deal, I am a happy happy owner. I now use the nine round magazine more than the 13 round. I learned how to fire without the pinky and now I cannot wait to get an XDs 45ACP. I would recommend this pistol to anyone, it is awesome. Pat

First time buying a gun online and this site made it very easy and enjoyable. This is my 4th SA in the XD/XDM series. I was carrying the XDM 3.8 Standard 9mm and switched to this 45 compact and have no regrets. The recoil is very low for a 45. My wife and I both shot it the first day and were very accurate. I do suggest getting a Pearce PG-XD45 grip extension. Perfect gun to carry and target practice with. I give SA and This site A+

Price was lower than I could believe. Placed order and 2 days later it was at my FFL. No shipping costs, no taxes!! How can you pass that up The gun is a great concealed carry and with the extended 13 round mag, it serves as an option for home defense. All in .45. Great value. Thank you Sportsmans Outdoor Superstore.

Love this weapon and the service was first rate. Springfield is at the top of the list for firearms. I highly recommend this dealer and will definitely shop SOSS again.