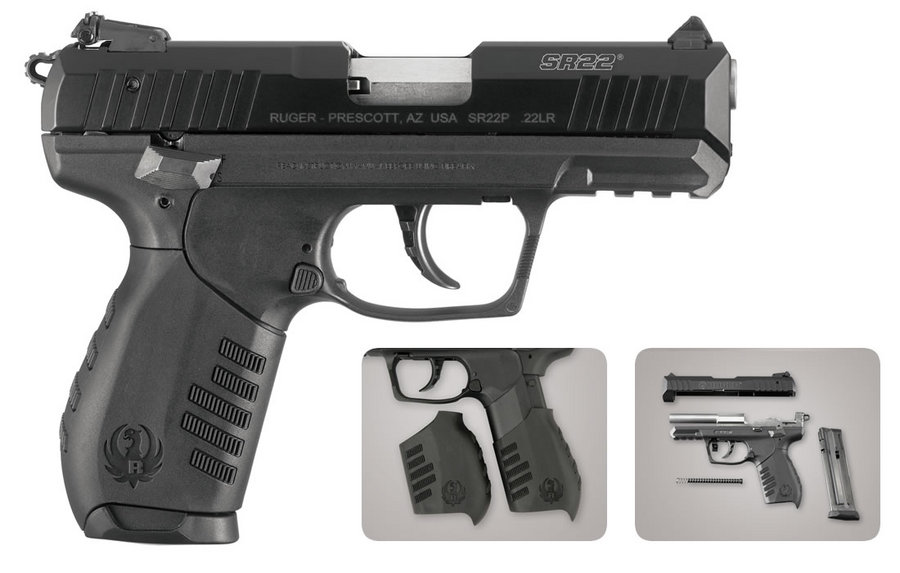 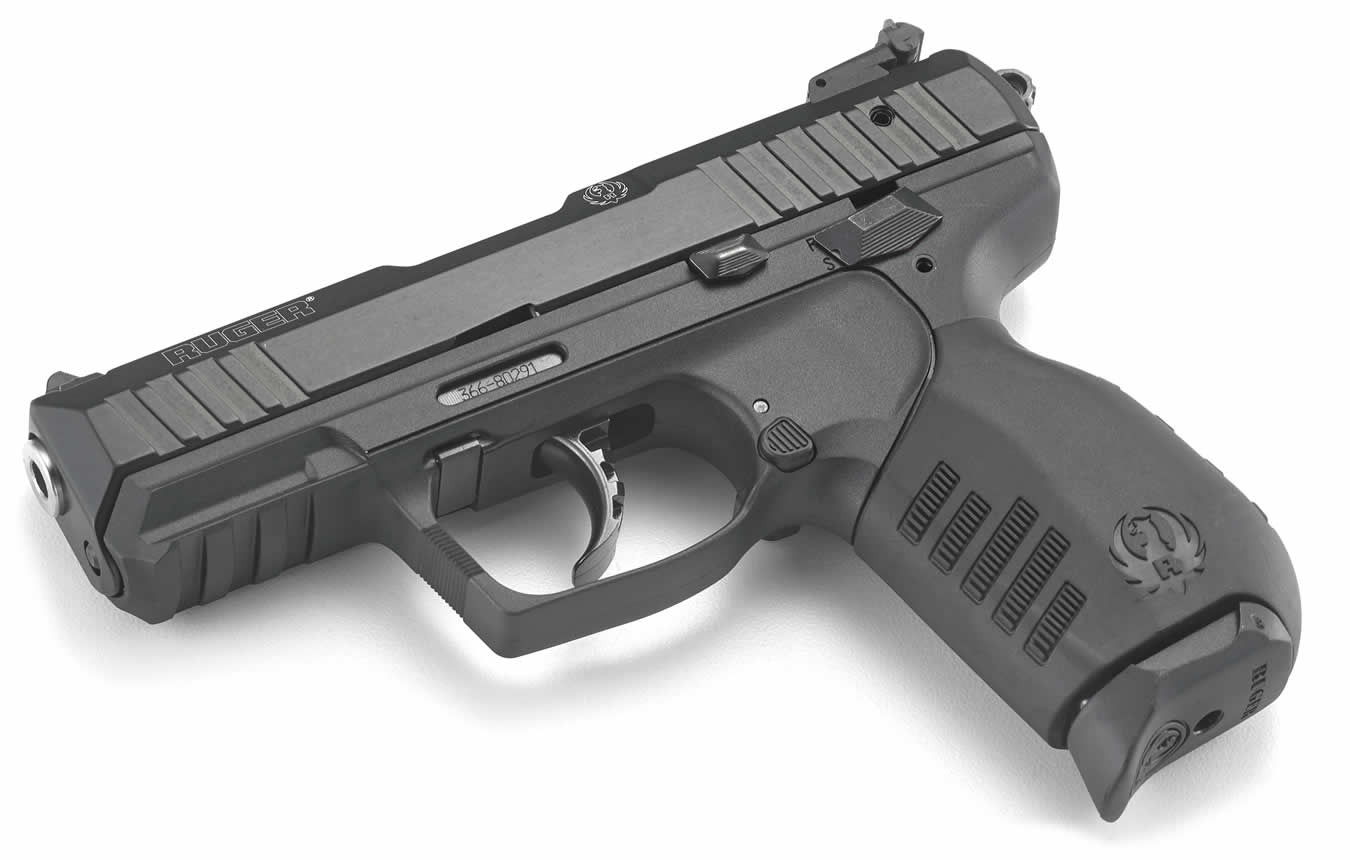 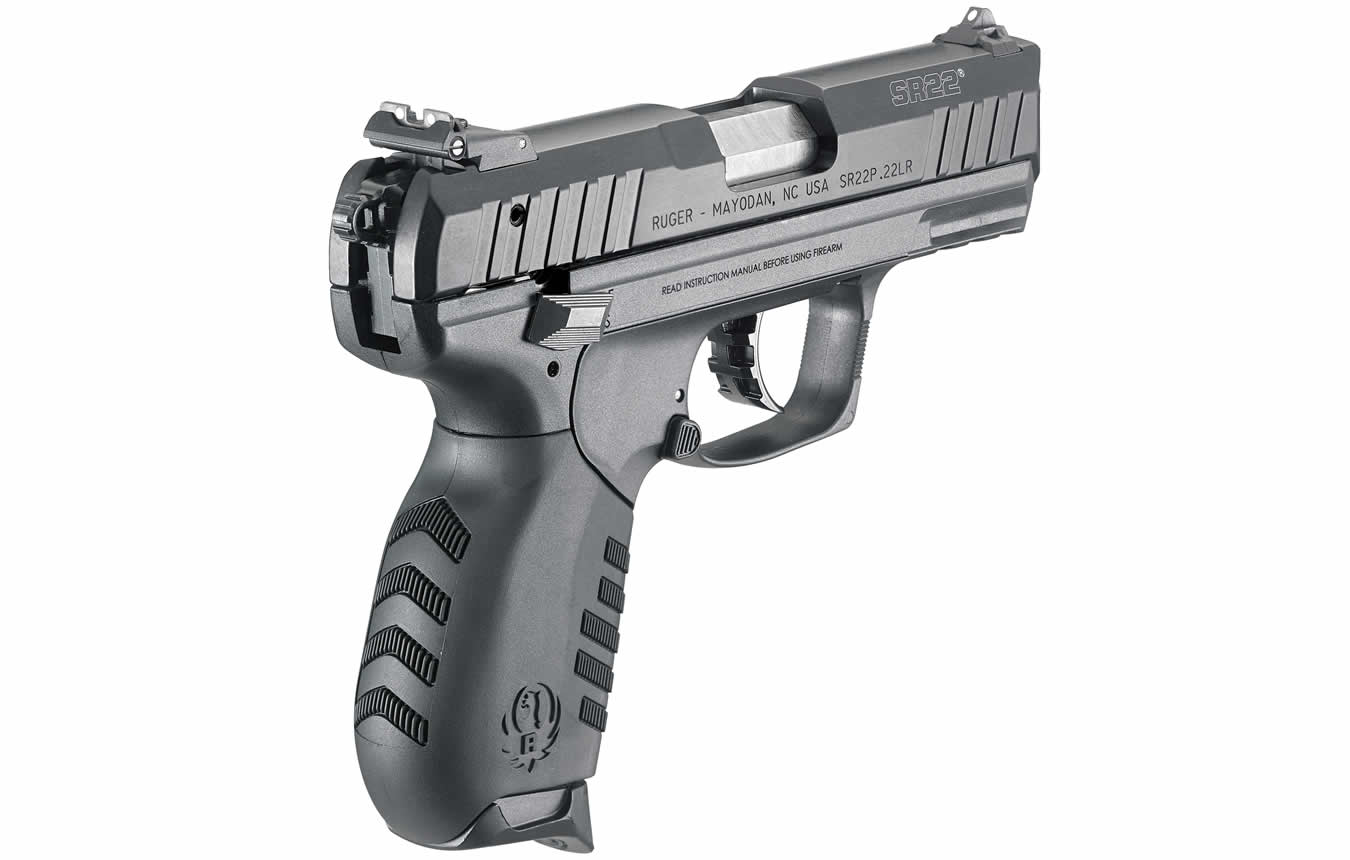 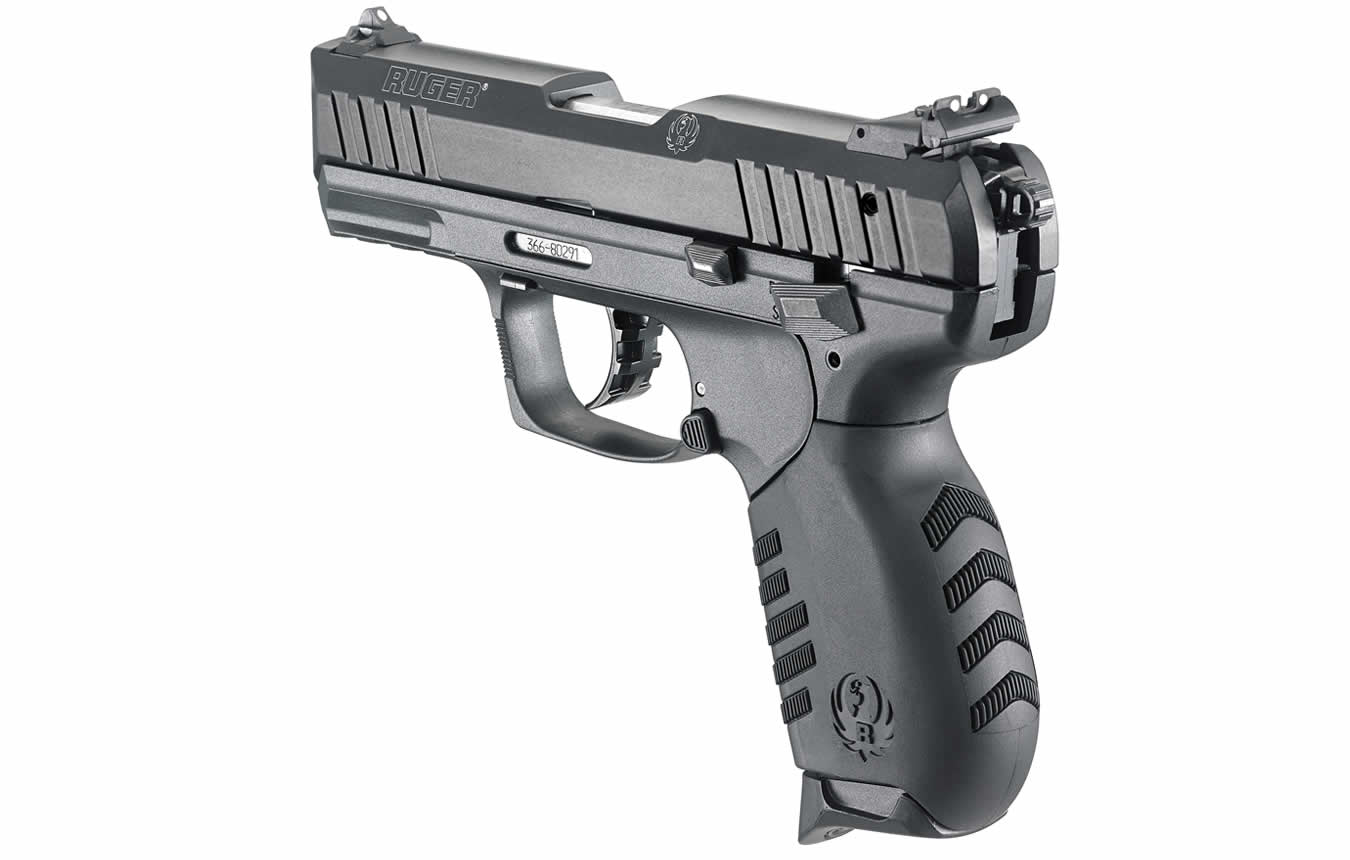 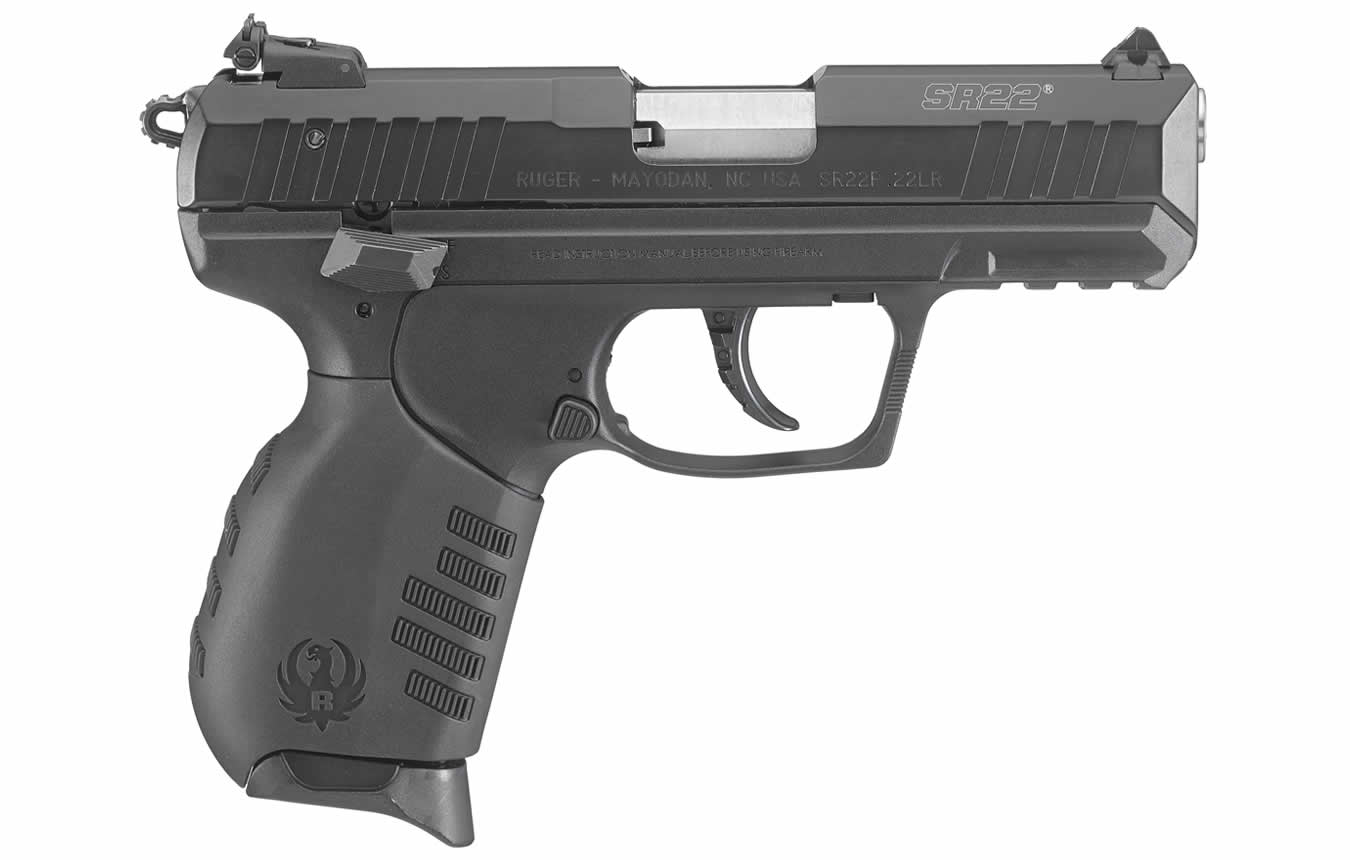 Packed with versatile features, the SR22® is lightweight (only 17.5 ounces) and perfect for just about anything - plinking, target shooting and even small game hunting. It is easy to field strip, fun to shoot, and will run reliably with a wide variety of ammunition (not just high-velocity ammunition).

The SR22 has light double-action and crisp single-action trigger pulls. Its external hammer is designed with a rounded spur for easy cocking and single-action shooting. The SR22 features a polymer frame and two interchangeable (no tools required) rubberized grips with angled serrations, allowing shooters to select either a slim or wider palm swell option. The aerospace-grade aluminum slide has serrations on both front and rear for better grip and slide manipulation. The easy-to-use underside Picatinny rail features multiple cross slots for variable mounting of most popular accessories.

The 3-dot sight system has a fixed front sight and a rear sight that is adjustable for both windage and elevation. A reversible blade allows shooters to select two white dots or a solid black blade. Other SR22 features include a stainless steel replaceable barrel, an ambidextrous manual thumb safety/decocking lever, ambidextrous magazine release, plus a visual inspection port to determine the load status of the pistol. The SR22 includes two finger grip extension floorplates that can be added to the magazine for comfort and grip. Each SR22 is also shipped with two 10-round magazines.

Very happy with the Ruger SR22, we shot 200 rds of CCI ammo the first range trip and it didn't miss a beat. First time buyer at Sportsman's Outdoor Superstore and it was a smooth transaction.

This was my online firearm order and I am really happy over all. Shipping to ffl is quick and my Ruger SR22 pistol is amazing. Will come back again.

Short review from ex 80s era FFL and longtime gun person. Ruger makes few errors. Mark II-IV/22/45 series all excellent .22s but a pain to break down. They got this one perfected. Buy it.

(5 out of 5) Ruger SR22: Really nice rimfire pistol; most convenient shopping experience
by Soe from St Paul, Minnesota on January 14, 2018

This is my 2nd one. Shoots everything I feed to it. A word about Sportsman's: very smooth transaction start to finish. Great deal and great gun. Thanks.

This is my second Ruger pistol and I've never purchased a gun online before so I was a little hesitant, but I’m glad to say the gun was just as described, quickly shipped to my local range, and at a really great price. Would recommend buying from this company, and I will be making future purchases from site again, thanks!

As a Ruger fan and a gun enthusiast, the SR22 is by far my favorite 22 pistol. It feels and looks like a full size pistol, great for teaching newbies and my 6 & 9 year old kids love it. Low recoil and accurate. I’ve sent over a 1000 rounds through it with not a single hiccup. The safety can be a bit confusing, but overall a great pistol to fire. Highly recommended.

Love the gun. Works well with every 22lr rounds I have put through it. Great practice gun. Website does not let you pick a ffl after ordering. You will have to send your ffl through email or fax so choose your ffl while purchasing to save time and hassle.

I love, love this gun! I had to change to the second grip that they sent, but I put 30 out of 30 shots in the 9 ring of the target from 25 feet at the range! I've only been 3 times in my life. This gun will shoot all day. I've heard others say the Walther P22 is better, but I cant fathom how. I can find the 2 pack of magazines for this sweet piece of American craftsmanship for less than $30 all day! Pick one up and you'll fall in love with this gun!

Picked up one of these guys about 2 weeks ago and am very pleased with it. I broke it down, cleaned and lubed it before testing at the range. I found it is a little picky with ammo but when you find the right ones, it runs like a charm. I shot 320 rounds of 5 different ammo. As expected, the CCI Mini Mags ran perfectly. Although hated by many and dirty, the cheap Remington Thunderbolts also ran perfectly and actually printed the best groups. Remington Gold had at least 4 failures to feed or eject in 60 rounds. Browning ammo, which I had never seen before also printed tight groups but did not perform well, failing to either feed, eject or fire at least 5 times out of 60. 2 different cheap Aguila rounds, one plated and one lead, did pretty good with only one fail to fire it did on restrike The gun itself was dead on right out of the box. All ammo was either standard or high velocity. I would not trust subsonic ammo to cycle in this gun. Overall, a nice target/plinking pistol that's a lot cheaper to practice with than the heavier calibers. Go try one!

It would not let me edit the other review but the gun seems to eat any ammo over 1200 FPS. The stuff lower the gun does not seem to care for.

Great for shooting all kind of cans.

Outstanding weapon. This is my 3rd SR-22 and its as good as the others. Very nice weapons, a little picky with ammo, but fun to shoot and use. Would recommend to anyone.

I bought this with the expectation of you get what you pay for. Paying only $275, I wasn't expecting much but a knock around plinking gun for my wife that may or may not work. I was floored by the quality. I'm a Sig guy, and am definitely looking at adding a full size Ruger to my lineup in the near future. Can't say enough about the quality but...buy one and you will see.

I've only put 1 box of CCI Quiet 22LR rounds but it failed to feed every single shot not once a magazine but 10 times a magazine. First Ruger I've shot. I was not impressed with it to be honest.

My favorite for sure! Yes, I'm a small woman whose hands (also ambidextrous) get tired from my larger firearms. This is by far my absolute favorite for the range. I can shoot about 100 rounds with no hand fatigue. I just got it a few weeks ago and shot great right out of the box. I just had to wipe it down to get the protective coating of oil off it. So far, no problems whatsoever. I love that the safety is on both sides- so no matter what hand I use to shoot, I have quick access to safety. That's one of the main reasons why I wanted this gun. Plus the trigger is smooth and easy to pull. It came with 2 magazines and I bought 1 more at the same time no additional shipping. Great little plinker for the range. Shipped right to my FFL with no problems. Just make sure you request to have your name put on the outside of shipping box, so FFL knows who it's for. It makes life a lot easier for pickup!

Bought this pistol about six months ago and have put 1200 rounds through it without a failure. I still have not cleaned it and shot it yesterday, no failures yet. I still mix my ammo in a container that way the brands of ammo are loaded randomly in the magazine and I haven't found a brand that will not function in this pistol! I love this Ruger!!

Great gun, functions flawlessly and is a joy to shoot

What needs to be said did my research - bought one and could not be more pleased ! Very accurate . Will likely buy another one soon . Do not hesitate any longer you will not regret it .

This pistol is AWESOME! I went to range and fired BLAZER cci ammo with no jams. It shoots great right out of the box. This company has fast shipping and excellent service!

I’ve owned my SR22 for close to a year. I am amazed how robust a firearm this .22lr is. Everything is in the right place with the right feel – an excellent handgun. Mine consumes box after box of bulk Remington standard velocity at 4 cents a shot without a hiccup and delivers consistent, small, in-the-black groups that exceed all expectations for a 3-inch barrel. It has a great trigger, field strips and cleans in a jiffy, and double taps smartly. I’ve found my SR22 to be all about quality and enjoyment of ownership.

After receiving my SR22 I went to the range to try it out. I test fired 50 Remington and 50 Winchester without any jams. I know that is a small amount, but at this point I am totally satisfied. My only problem was that I did not receive an instruction manual, but was able to download one from Rugers website.

I bought this pistol for my wife when we go to the range. She was shooting about 60 worth of ammo thru my SW 40. Now she shoots about 300 rounds every time at the range, save myself about 50 just on her. Gun is a very nice little piece. Be sure you clean it everytime and dont use cheap ammo or it will jamb or try double loading. I used blazer, M22 and CCI tactical all 40gr. CCI tactical is all I will buy for this gun.