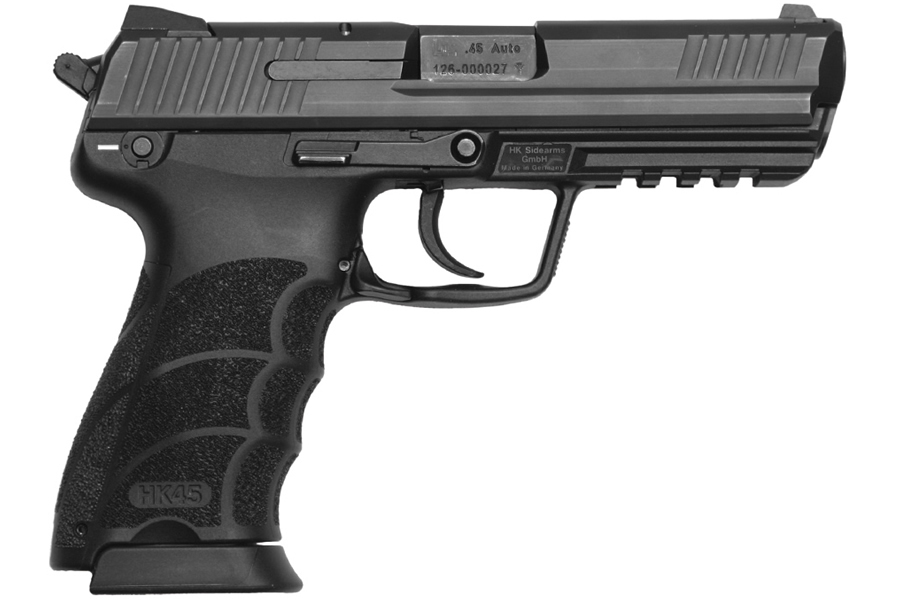 The HK45 was developed as a product improvement of the highly regarded USP45, first released in the 1995. The Caliber .45 ACP HK45 includes several user-inspired enhancements including changeable grip panels (backstraps), a Picatinny MIL-STD-1913 accessory rail, better ergonomics, and more ambidextrous controls. Along with the HK45 Compact, the HK45 was developed as a possible candidate for the Joint Combat Pistol (JCP) and Combat Pistol (CP) programs administered by the U.S. military in their search for a new service handgun to replace the 9-millimeter M9. These programs were suspended before completion and no pistols were selected.

Using HK’s unique internal mechanical recoil reduction system reduces the recoil forces imparted to the weapon and shooter by as much as 30%, improving shooter control during rapid firing and increasing component service life. Capable of firing standard .45 ACP ball through +P ammunition, the HK45 combines the accuracy, modularity, reliability and minimum 20,000 round service life of the famed USP45 series with the improved ergonomics of the P2000 series pistols. HK45 models can be also be fitted with threaded barrels for use with muzzle mounted sound suppressors.

Extensively tested and operationally proven, the HK45 Series is a new paradigm for Heckler & Koch handgun design and is currently being assembled from U.S. and German made components at HK’s American manufacturing facility in Newington, New Hampshire.