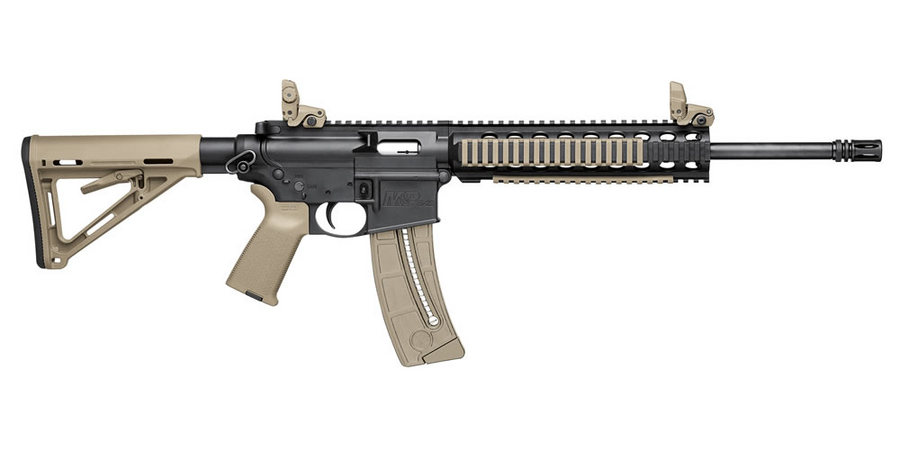 The new M&P15-22 is a dedicated M&P15-format rifle designed and built as a true .22 LR semi-auto from the ground up, with all the standard operating features and accessory specifications of a modern-version centerfire M&P15 rifle.

This gun is pretty sweet. Everything is the same as an AR-15. I like being able to use the same training and drills with cheaper ammo. However, I've had quite a few issues with this rifle. I owned it for about 9 months never being able to shoot a full magazine without failures to eject. It was usually every 3-5 rounds. Extremely frustrating and it made this gun not very fun. I finally sent it back and the first time I shot it after the fix I got 3 OOB rounds and the last one blew the extractor off. I just wish it would run like so many of the videos I've seen.

1st purchase with SOS... Extremely Satisfied. Best price, no additional CC fees unlike most online merchants and ordered late Tuesday evening they shipped Wednesday and FFL took delivery on that same Friday and this was the no shipping cost option. This is my second S&W .22, but love this model because of the look and the Magpul flip up sights. The Magpul sights allow me to acquire the target much quicker than the standard sights. After some quick adjustments I was shooting center mass at 25 yards free hand with 75% of the shots within the second ring. I shot 3 brands of ammo: Winchester bulk 555 hollow points, CCI Mini Mag and the True Test some 35 year old Federal lead head in the blue white and gold box. Back then it was the cheapest bulk pack you could buy. Out of 1,000 rounds I had one FTF and you guessed it, it was the Federal of which I shot 90 rounds.

I have also owned and or shot the Mossberg and the Colt AR style .22 and overall I think the S&W is the best value for your dollar, especially if you buy from SOS.

I don't normally do reviews unless it is an outstanding product or outstanding customer service and in this case it was both.

2nd gun from S.O.S. best price with no shipping cost. Awesome!! Got it in 4 days. What can I say. I bought my 1st S&W MP 15-22 and fell in love with it, until my daughter took claim to it. Then I had to buy the MOE addition for Dad. Both are performing flawlessly. Just like my 1st one, both have shot every kind of ammo I have in stock. If your like me you buy whatever is left on the shelf at your store. Not ammo picky at ALL. I have tried hard to get it to fail, just did not happen. I totally recommend S.O.S and Both S&W MP 15-22. These are our fun guns. Enjoy!!

Super fast shipping, received in 2 days just as ordered. The blinker, ambidextrous single point sling swivel and all the moe furniture for a few extra bucks definitely the model to buy. Ate all the different varieties of 22lr ammo I've had available to feed it with no issues. Safety, mag release, charging handle, bolt catch and break down just like an AR should unlike the more expensive HK. S&W for the WIN

This is a great rifle. This is my plinking rifle and I have it setup similar to my other ARs. I havent had any issues with the rifle with thousands of rounds through it. If you need magazines for the rifle get them here as they are so much cheaper than other places on the web.

Great gun. Nicely done. I attached a Magpul sling, AFG2 and sightmark ultra shot reflex sight sm13005G. Everything is perfect right out of the box. Mostly I like the Magpul folding sights. I run out of battery, I don't have to remove reflex sight to use, that's a plus.

I chose this item due to all the great reviews I have read and videos online. Couldn't find a negative review at all. So this is just another one to put on the positive column. The FDE version has a great feel and look to it, well worth the upgrade from the stock version. I am ordering the Bushnell TRS-25 red dot to add on as a sight. The only downfall is that you better have enough ammo and mag clips otherwise your spending half your time loading.

You wont be disappointed order Now!!!

Get yourself one of these. As usual, the service from S.O.S.S. was 2nd to none.

I bought this gun and liked it so much I bought 2. Runs flawless with any ammo IF you keep it fairly clean and run it wet.

I have 3 AR platform rifles 2 .223 and 1 .308 and for a dedicated .22 platform this can not be beat. Some people will say: Its all plastic, no its composite get used to it, look at your car. Dime size groups at 25 yards. and eats all rounds I could feed it with no hiccups. This gun is just fun to shoot. I am glad I bought 2.