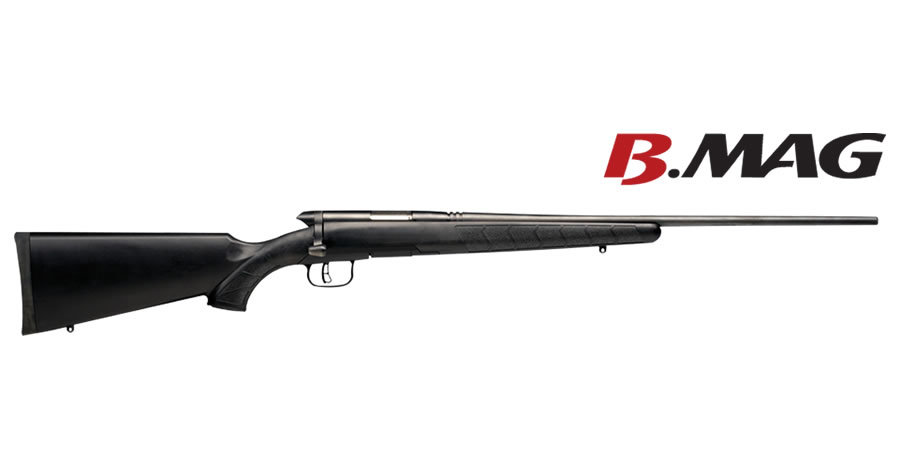 The .17 Super Magnum is the “new kid on the block” in terms of ammunition cartridges. Not your typical .17 caliber, this cartridge fires a 20 grain bullet at 3,000 FPS; making it the fastest, flattest shooting rimfire in the world. The cutting-edge Savage B.Mag was designed to deliver that blistering speed with all the accuracy of a Savage.

The Savage B.Mag features a completely new compact rimfire action with rear locking lugs as well as a cock-on-close bolt, while keeping the same thread-in barrel headspacing system as the rest of their centerfire rifles. A neat attribute of this firearm is the center-feed rotary magazine it utilizes, capable of holding up to eight rounds. Additionally, The B.Mag sports Savage’s praised Accutrigger, which is infamous for being light, crisp and easily adjusted without the use of any special tools. So if you are in the market for a lightening fast tack-driver that one can shoot all day on the cheap, look no further than the new Savage B.Mag 17 WSM.

I have to say I was skeptical of buying this rifle after reading the other reviews on here. But I took the chance... and boy, I couldnt be happier. This baby runs smooth and accurate. Savage doesnt get the same recognition as the higher-end names like Browning when it comes to bolt rifles, but Im perfectly fine with spending 1/4 the price for a gun that hasnt caused me a single issue and im sure those higher-end companies probably charge a premium just for their name alone.

I'm sure the people who left bad reviews on this gun weren't lying. But I'm thinking Savage must've fixed whatever problems were happening in the past, because this gun's been great to me.

The gun was easy to zero. That said, need to wait like the other owner Ken said the left side of the stock is a lot tighter then the right side. May have to go for a new stock Boyds

The gun has performed as expected once zeroed. I will have to see if that holds true once the weather heats up as the stock on the left side of the barrel appears to be extremely tight. The cost and availability look to be an issue going forward.

The service from sportmansoutdoorsuperstore.com was excellent, the purchase was smooth and saved some $$ to use for that ammo or materials for a new stock!

Had to send the rifle back within 1 week of receiving it. Rifle fired upon attempting to close the bolt. Savage repaired it with a part costing $1.00 Have been unable to find any ammunition for the rifle at all

Pros: Light Rifle, Very accurate, Ammo is fairly cheap from the right places
Cons: I had to put extra high scope rings so the bolt handle would not hit my scope. At first the bolt was very tough to open and close - after shooting several rounds through it and lubricating it seems to be a lot easier. Overall this rifle is perfect for me - on public hunting land I am restricted to a rim fire or shotgun only. This rifle has replaces my .22 mag and I am very pleased that I purchased this rifle and am using it for my coyote hunting trips.

Loved the price. Delivery was quick and painless although you had one FFL name and another FFL phone number, it all worked out for the best. Overall a very pleasant experience and I wouldnt hesitate to order from your company again. Thank you for providing a good product for a fair price especially in todays market and the quick shipment.

rifle looks and feels cheap,looks like a cheap toy. cant wait till Marlin comes out with theirs, my Marlin 17 HMR looks and feels 100% better than the Savage 17 super mag, Savage needs to go back to the drawing board. I owned pellet rifles that were nicer than the savage 17 super mag.savage appears to think all they have to do is put an accu-trigger on a piece of plastic and they can call it a rifle.

Sent 1st gun back to Savage as it would not fire 2-3 rounds out of 6. Sent me a replacement gun. This 1 is very hard to lock the bolt AND I have had 4 shells stuck in the chamber out of 15 rounds fired. Looks like this will be going back too.

Very lightweight polymer stock feels like a toy. Cheap feeling, poorly constructed action. Very hard to close bolt making it impossible for a quick follow up shot. Not even close to the quality of the 17HMR rifles Savage offers and more expensive. VERY DISAPPOINTING rifle. Savage struck out on this one BIG TIME.