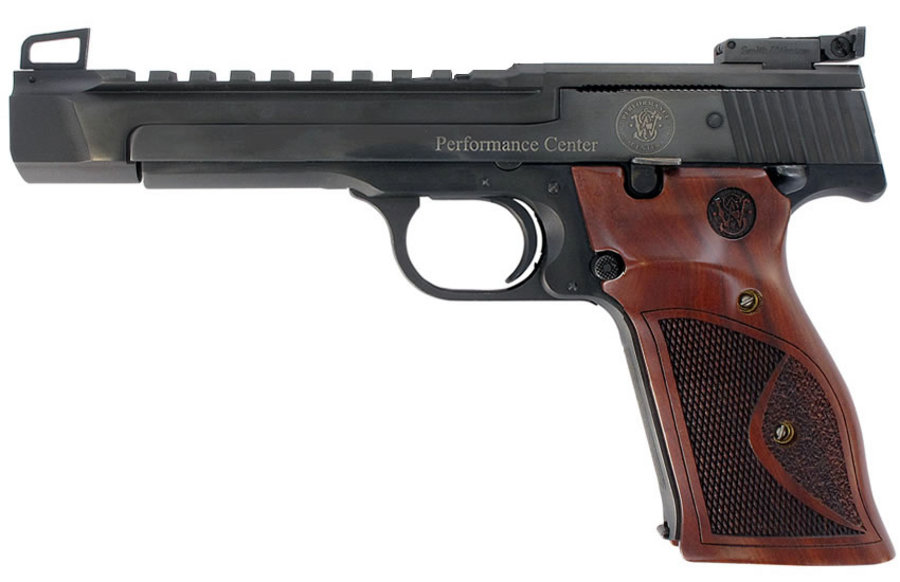 Smith & Wesson’s Performance Center guns originate from standard designs or are created from the ground up. From hand-cutting and fitting to fine tuning for precision, these firearms are top performers. Products from the Performance Center are the ultimate expression of old-world craftsmanship blended with modern technology.

The Smith & Wesson Model 41 is the top of the line in rimfire pistols. Used by national level competitors for acute precision in competition, the Model 41 is considered one of the best .22 target pistols ever manufactured.

I have been a diehard fan of the S&W Model 41 since my first ownership of one back in 1979 at the young age of 14 when my dad bought me this and paid $325.00 for it brand new. I shot many thousands of rounds of all brands of ammunition through that gun for several years until selling it in 1986 which I’ll always regret doing. I remember many times going to the outdoor target range and placing a coke can at about 35 yards and shooting it multiple times, pushing it further out each time I hit it until it would be at around 50+ yards or further. All the years I shot it I never remember it ever jamming which said something for it. Now at 53 I own my 11th and 12th one and don’t ever plan on letting these go.

I bought the 11th one back in February of this year and paid 1300.99 for it and am so glad to have been given the chance to once again purchase and own one. This one is the “Performance Center Edition” version which seems even harder to find than the standard ones. Also in August of this year, actually a couple of days ago I had the chance to find and get a 7” barreled standard version one and paid 1080.99 for it. I haven’t shot either of these yet but I must say the look, fit, and feel of both examples are totally as expected with these guns. PERFECT!!

My favorite feature of these guns is the superb, crisp, light weight trigger pull and both examples here are no exception! When storing these and any .22 LR firearm I always keep a plastic snap cap in the chamber so that I can dry fire the hammer to keep it in an “at rest” position so the spring is under less pressure. I must admit the trigger pull on both examples like all the others I have owned breaks like the snapping of a pencil lead. Just PURE PRECISION!!

I am really surprised S&W still produces this model and in my honest opinion look for it to be pulled from the line at any given point due to the cost of making it now. But I have thought that for some time now and they still keep on making them although they are rather hard to find most of the time, especially the Performance Center Edition. For anyone interested and wanting a fine precision target pistol you absolutely will not go wrong with investing in the Model 41. I’ve owned both the Colt Woodsman as well as the High Standard Trophy and even though they are with no argument superb guns, I still prefer the Model 41. To me the Model 41 always seemed to exude a little more heft and brawn in the build quality like in the thick, wide cartridge extractor as well as the robust appearance and feel of the trigger not to mention not having to worry about gold plating wearing off.

They are a great investment to say the least and just keep rising steadily in price. The S&W Model 41 will always get my top vote!!! I highly recommend anyone who likes .22 LR bullseye shooting to obtain one of these fine works of art while they can still be had!!