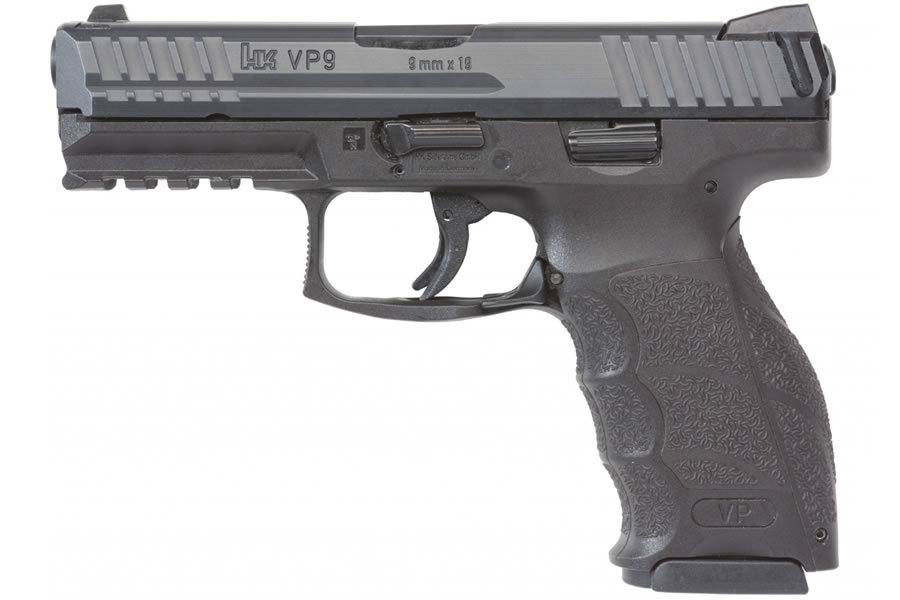 In development for more than four years, the VP9 is Heckler & Koch’s latest handgun and the first striker fired HK since the renowned P7 series pistols were introduced in the 1980s.

HK pioneered the first striker fired handguns, producing both the VP70 and P7 series, designs that impacted several models by HK competitors. But a superior trigger has eluded most striker fired pistol designs. The VP9 trigger surpasses those found on competitors. It has a short, light take-up with a solid, single action type break followed by a short positive reset.

Although influenced by other HK models, the VP9 has all the hallmarks of the latest, state-of-the-art handgun. All controls are completely ambidextrous. Slide releases are present on both sides of the frame and the magazine release can be easily activated by left- or right-handed shooters.

VP pistols are made in Heckler & Koch’s Oberndorf factory in southwest Germany. The VP9 is well-suited for civilian sport shooting, security, military, and law enforcement use.

This is really a fun gun to shoot. Accurate with one heck of a trigger. Minimal recoil. Swallows all kinds of ammo without a hitch. Puts my Beretta PX4 to shame.

First and foremost, SOSS has a really good price on this pistol, and yes there are cheaper 9mm at SOS, no comparison-it's an H&K. Just finally cleaned it after some 2000 rounds, some shot in the rain. I rapid fire shot most of those rounds and it passed the test-smooth as the day I bought it; NEVER JAMMED. Introduced the VP9 to some friends at the range and now they are also proud owners. As for concealed carry- you can; remember, it's close to a full size, and that's what makes it a very accurate pistol. Don't go buying cheap pistols. When comes to life and death, your last thought might be a regretful one of not having a superior weapon. H&K is Superior, just like the Springfield XDM models and the Sigs.

If you're looking for an EDC, this is your gun. This H&K is one of the best guns I've ever shot. The only drawback of this gun is the trigger guard. It should be bigger to keep it from bothering your trigger finger....Go get and shoot one. I think you'll like it.

Excellent, excellent pistol. The ergonomics are the best of any pistol I've ever held and is probably more accurate than I am. The paddle mag release took about 5 minutes to get used to and now I actually prefer it.

My only gripe is the finger safety on the trigger chafes my trigger finger after a couple of mags at the range. I might end up sanding that down a bit.

Overall, an excellent choice if you're looking for this size pistol.

I waited for months to buy The VP9, I heard some many good things about this awesome gun, so my sight was set on 2 handguns and this one came back in stock. I order Thursday night before memorial day, came Wednesday afternoon on Standard Shipping but I only paid 25 dollars to the FFL, other sites charge taxes and S&H, Sportsman Outdoors doesn't. My VP9 came just on time before my CHL class can't wait to use it and show it off. I will definitely order again from these folks

The HK VP9 has quickly become my favorite handgun. I was extremely blown away by the ergonomics as well as the fit and finish. The trigger is the best of any polymer handgun on the market. I prefer the feel of the VP9 trigger over the Walther PPQ and Sig P320. I have about 500 rounds through it and it eats whatever I feed it. I mostly shoot cheap and dirty ammo which is known to be unreliable however, it keeps running. With zero malfunctions or failures straight out of the box, it's clear the vp9 is engineered to perform. I'm not a large guy but the the right belt and holster makes this gun disappear on your person. I have shot a lot of Glocks and have many friends who swear by the Glock platform. The vp9 has made them all converts. My buddies are selling there Glock 17s and 19s to get there hands on the VP9. You will not regret purchasing this gun at all. Highly recommended to your pistol collection