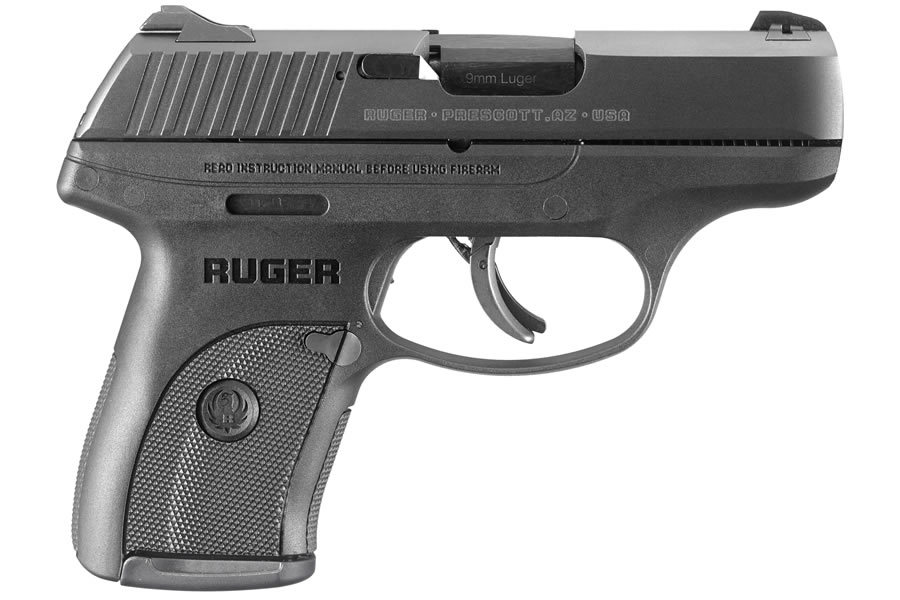 The LC9s is a striker-fired version of the award-winning LC9 pistol. Like the LC9, the LC9s is a slim, lightweight, personal protection pistol that is chambered in 9mm Luger. The LC9s features a newly designed trigger mechanism with a short, light, crisp trigger pull that improves accuracy and performance.

The compact, 17.2 oz. Ruger LC9s pistol has a 3.12” barrel, an overall length of 6”, a height of 4.5” and a slim 0.9” width. The compact frame and short trigger reach is designed to accommodate a wide range of hand sizes. The LC9s offers modern safety features such as an integrated trigger safety, manual safety, magazine disconnect, inert magazine for safe disassembly and a visual inspection port that allows for visual confirmation of a loaded or empty chamber. The LC9s ships with one 7-round magazine and a cable locking device.

Ive been shopping around in my home state/area southern Maine for the past month or more for a good and affordable 9 mm semi pistol. I found Sportsman during a google search and ordered the Ruger LC9s and some 9 mm ammo. I had the gun sent to my local Cabelas for pickup. It was here approx 2 weeks after my order and I was able to do the gun check and pickup within 30 min at Cabelas. I was soooo pleased for such quick response, especially considering how difficult its been to purchase any sort of firearm. Ive taken the gun out to the local shooting range a couple of times and have been very pleased by the guns performance. I am so impressed by Sportsmans Outdoors!!! Ill be shopping there again!!! John C

My first conceal carry is a Glock 26 Gen 3. Great gun but a bit “bulky”. Late last year I purchased a preowned Ruger LC9s from my local Shooting Center, Boyert Shooting Center. I absolutely love this gun! It is light weight, slim, very accurate, feels great in my hand, and I can shoot amazingly well with it. It is my EDC with an IWB Soft Leather Water Buffalo Holster from Muddy River Tactical. This is a great combination. Most of the time I can’t even tell I’m carrying. The Glock 26 is a great pistol but I’m seriously considering selling it. If you’re looking for a great gun for everyday carry, do yourself a favor and take a look at the LC9s, EC9s, or LC9s Pro. You won’t be disappointed.

Great little 9mm. Conceals well, feels good. Only things I didn’t like was the take down pin being the way to take it apart, the magazine disconnect and the manual safety would come off without me knowing, while wearing. Those could be reasons to carry something else to some ppl though.

Won't get into why, but I own 3 Ruger LCs LC.380, LC 9, and LC 9s. I own a number of firearms and have been shooting since my great grandfather taught me when I was 9 - in 1952 For a reasonably accurate CCW weapon, this is undoubtedly a winner. I have no problem with any of the LCs except for looooong trigger pulls. The LC9s trigger set up is so superior, my other LC9 has been relegated to staying under my dashboard via a magnet. Although I do prefer .40 cal. over the 9mm and also carry a S&W Shield .40 when I can, the Ruger, albeit the same size has a rounded corner design that makes it a better carry as the design is perfect for a cargo pant/or short pocket without printing. The LC 380 was my late wife's and it is now my daughters. Everyone in this household has a CCW.

Shoots great. Very little kick. Smooth pull. Like it so much I'm now a Ruger devotee.

Got this gun because my Taurus is under factory recall with an undetermined return date. I absolutely love the weight, the look and most importantly the handling. I actually like it far better than my Taurus Millennium. Due to the horrid customer service I have endured during my handgun recall, and how extremely satisfied I am with this purchase, I am now a Ruger loyal. In fact, I have been researching ARs, and because of this experience, I purchased a Ruger rifle.

Quick shipment and very happy with purchased price. Can't wait to shoot a few rounds at a range!!! Would buy again.

GREAT PRICE LC9S! I searched around on the net found a few places that had the same handgun but $30 or more for shipping plus taxes ... Great little 9mm now I got my eye on the M&P 9 Shield ...

I already have the Ruger LC380 and really enjoy the way it performs. Then I tried the LC9s at my local indoor range and fell in love with it immediately. It's basically the exact same gun in feel and weight, but oh what a difference. Given that I have arthritis in my right hand trigger finger, of course the striker fire is SO much better for me. It's just a NICE NICE gun. My new carry gun to be sure. Delivery was spot on when FedEx said it would be. I have several friends looking at your site for their next toy.

Much better trigger pull than my old LC9. Even though it was in stock, SOSS took several days to ship. Finally shipped after I sent a email asking when it was going to ship. I would still buy my next gun from SOSS. Best prices around...!!!

I highly recommend this Web site for its processing my order and shipping my order promptly. And would recommend it to my friends.

This is a light pistol; therefore the kick is a little harsh. The performance has been very reliable and continues to perform after 1,000 rounds. Lately I've had a few stovepipes, but it could be the cleaning fluid I switched to. In any case, it doesn't happen enough to be a great concern. For the money, a great value

Perfect ccw handgun. Have shot 70 round through it with absolutely no issues! Trigger pull is awesome and gun is very accurate! Custumer service was great! Delivery very fast!

This is my second LC9, I had the original LC9 hammer fired and really liked that handgun. BUT, I didn't like the trigger!!! But the LC9s striker fired is so much better!! The trigger is a 100% improvement over the original..

I initially bought the LC9 with LaserMax, and absolutely hated it. The trigger pull on the LC9 is about the distance from London to New York. Horrifically long. Hated the dopey, cheesy Gun is Loaded indicator that pops up on the top of the LC9 when there's a round in the chamber HEY EVERYONE! MY GUN IS LOADED!. Also hated the hammer-fired aspect of the gun the hammer is internal, so you can't cock it and shorten the trigger pull -- yet another safety feature. Plus, the gun WILL NOT FIRE unless the magazine is in it. So, if you are struggling with a bad guy and the magazine gets ejected which is fairly likely, the best option you have is to throw the LC9 at him and hope it knocks him out. HEY RUGER: you can build a safe gun that doesn't have 15 annoying safety features on it. About the only things I liked about the LC9 were the feel of it in my hand, and the LaserMax.

So, I was a tad reluctant to buy the LC9s, based on my very brief experience with the LC9. Man, am I glad I did. It is striker fired. No dopey indicator tab. The trigger pull on the LC9s is roughly the same as my other semi-automatics, which is perfect. It is the perfect concealed-carry weapon. It is larger than the LCP thank God, but you can still easily fit this into your pocket in a holster. I took this gun straight to the range and shot it straight out of the box. I shot bullseyes or close to it the first two mags. This gun is so comfortable in fairness, so is the LC9 that it feels like an extension of your hand.

If you're looking for a thin, light, easily concealed pistol, this is easily one of your best options.

First I'd like to make a correction about Whats in the Box listing for this LC9S. There is no Internal Lock Key. The internal lock of the LC9 was replaced with a protruding lever trigger lock for the LC9S. So, no need for a Internal Lock Key.

The LC9 is a top notch carry but I grew tired of the long trigger pull. My local gun dealer traded me out of the LC9 that he had sold me last year to the new LC9S. This is my first experience with Striker Fire which helped to yield a huge improvement for the trigger pull. Much more comparable to my Walther PPX and Bersa Thunder 380 ACP as to trigger pull, rather than the LC9.

My dealer sold my LC9 while I was filling out the paper for the LC9S. The new LC9 owner and I had a long discussion about the LC9. We both left the gun store very happy.