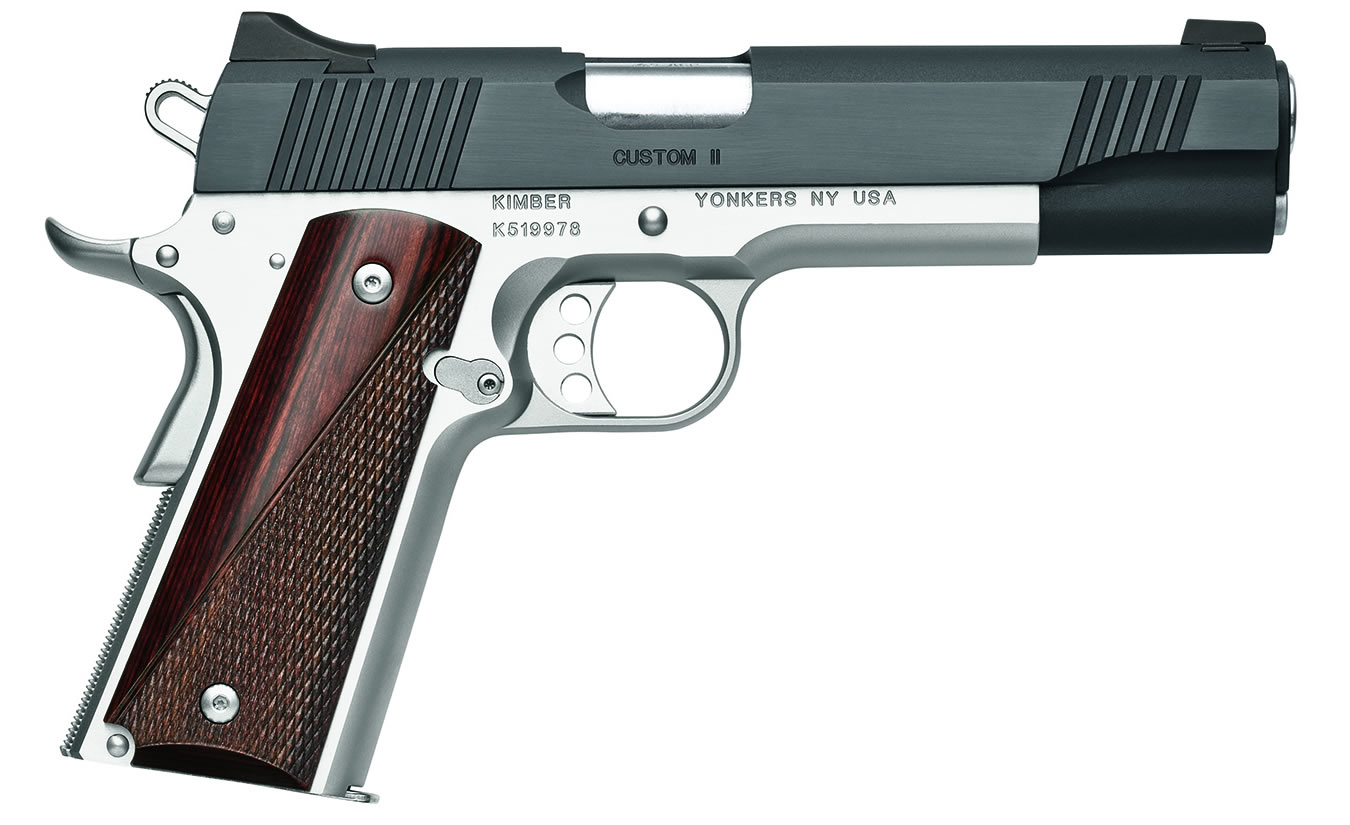 One of the finest all-around pistols available from Kimber, complete with a brushed polished carbon slide, stainless frame and rosewood grips. The Custom II Two-Tone features an extended beavertail grip safety for fast, positive operation. The 5-inch match grade barrel and bushing equates to unequaled accuracy, and behind its beautiful appearance, the full-size stainless steel frame is machined from a solid steel block to increase strength and long life.

This was my first .45 purchase. After firing my friends Kimber .45 compact, I knew I wanted to graduate to the granddaddy classic firearm every man and women should own. While I certainly liked my friends compact 45, I figured I couldn't go wrong with the class full size. This isn't a carry piece, but is a range mainstay. While this Kimber variant might be considered the entry level model, it certainly doesn't feel or shoot like it. Great weight, grips and action. Love my decision to go with the Custom II.

As for Sportsmans Outdoor Super Store -- they are a great online retailer, and I've purchased several firearms from them. They are the first place I look to find and price my next purchase from pistols to ammo. The one time I've had an issue, they were prompt and courteous, and took care of the issue putting me first. Don't hesitate to buy online from them.

This Kimber 1911 45acp was my first 1911. This is an awesome weapon. Trigger is smooth, craftsmanship is beyond words. The price from SOSS cannot be beat!! They have all the competition beat hands down.
When I placed my order, I was greeted with pure and gentle care and professionalism. Even when I had a question about magazines I was greeted with the same professionalism and care, and the response time was great as well. I will definitely be doing a lot more business with SOSS!! Prices cannot be beat on any of the items I’ve looked into.

One of a kind. Really slick gun. Very comfortable holding and solid. First shot was a bulls eye at 10 yards. I am extremely happy with this gun. My first 45 was a hit. It shipped in 5 days and received it 2 days later. Called twice to inquire about it. They were just backed up but the customer service was very nice!

After doing research, I was a little worried it would not function perfectly out of the box. As you may know, a break in period is recommended. However, it has worked flawlessly so far. No hiccups, jams, or problems. The only other piece of mine that was this flawless within the first few hundred rounds was my Glock 43. 10/10 for the Kimber 1911. Also, Sportsman's Outdoor Superstore shipped it out the SAME day it was processed. 10/10 for SOSS.

Ordered this on a Thursday and received it the following Tuesday. I bought this for an unbeatable price and it arrived in perfect condition. I will definitely shop here again.

First off, let me just say that I recently discovered this site in November, and I am so glad that I did! The flash sale emails are fantastic because these guys group up a cool collection of guns, then slash the already low prices even more!! I have gotten some killer deals and check the site daily now. The Kimber of course is a great gun and has ran just as expected. The fit and finish is flawless and I cant say enough about Kimber's customer service. I think this is by far the best 1911 for under a thousand. Can't go wrong here!

The Kimber Custom II is a perfect combination of beauty, quality and price. It is a pleasure to shoot because it makes me appear to be a better marksman than I am. Buying from SOSS is also a pleasure. Their prices and service are unbeatable.

Im glad that I waited to buy this. Its one of the nicest firearms Ive ever owned. Had to adjust the rear sight a little to fit me, but its dead on smooth, time and time again. Will fire all ammo including my friends reloads with no jams or misfires. Treat yourself to a Kimber, you won't be making a mistake

Order came quickly. The fantastic price made my decision easier. I've heard people either love or hate Kimber, and after this purchase, I'm definitely a Kimber guy. This pistol shoots like a dream. So far I've tried two different brands of ammo, and zero issues with the factory mag. It feels like a very well built gun, and after shooting this, I'll be purchasing another Kimber for a carry gun.

Gun was shipped in less than 24 hours and received a couple of days later. Had jams and feeding problems with the gun but Kimber replaced the mag. and is all good now. Overall, great doing business with SOS but not so much of a good experience with my first 1911 Kimber. I was expecting a lot more from Kimber, took them almost 3 weeks to deliver the replacement magazine.

Got great customer service from Gary Beggrow, literally went above and beyond to help me with this deal. Gun was delivered as described. I'm happy with the pistol, price, and service I received.

Thank you very much, I'll be putting in another order soon!

(5 out of 5) Kimber Custom II Two Tone
by John from Hattiesburg, Mississippi on September 18, 2015

Sportsmans Outdoor Superstore is great. I called twice, and both times they were very nice and helpful. The pistol was shipped a few hours after I completed my order. It arrived at my FFL in two days, everything was correct and as advertised. The pistol is beautiful, and functions perfectly. I am very satisfied.