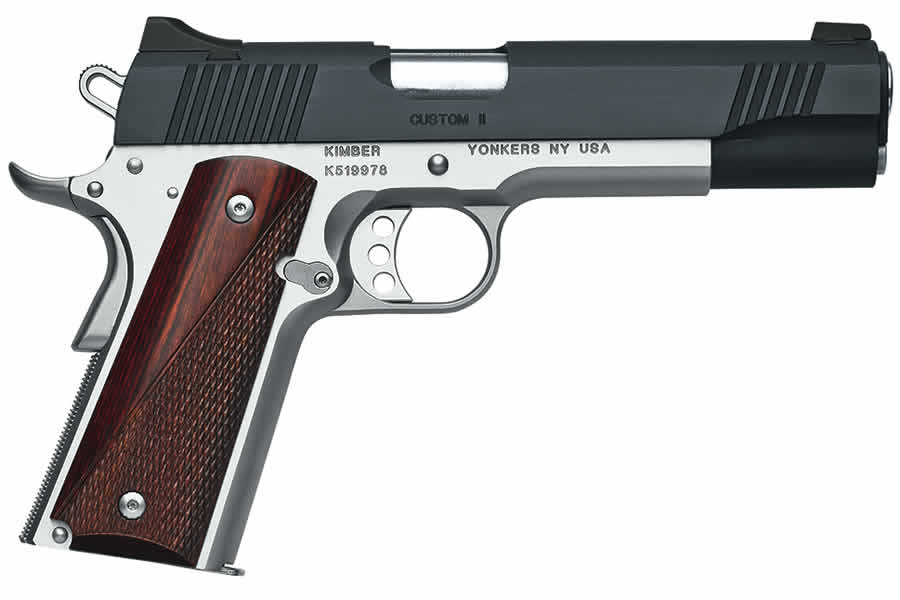 Getting back to basics has never looked so good. The Kimber Custom II Two-Tone has no-nonsense features that promote intuitive operation and absolute dependability, including lowered and flared ejection ports, machined dovetail mounted sights and edges that are rounded and blended for comfortable carry. The classic two-tone slide and frame finish is accented by rosewood grips. Offered in 9mm, this Kimber 1911 is a perfect choice for concealed carry or personal defense.

Purchased this gun last week, and have been out twice to shoot. First 1911 style pistol for me, and I really like it! I still like Glocks, but this gun looks and feels great. I knew when I first picked it up that it was a high quality gun. Would not have been interested, but was at a sporting goods store a couple months back, and salesman wanted me to pick one up. Knew when I held it what my next gun purchase was going to be! Looks awesome, and shoots awesome. A quarter would have covered holes from first 3 shots at 12 yards. Went down hill from there, because I thought the gun was so good that I could not miss. Purchasing through Sportsmansoutdoorsuperstore.com could not have been easier. So easy that it is scary! Entered my information, picked the FFL I wanted to use from the list, and clicked purchase. Few days later went by and picked up my gun. Do wish that it came with at least 2 magazines, and would prefer 3 like Glocks. Otherwise, I'm very satisfied with look and quality of this gun!