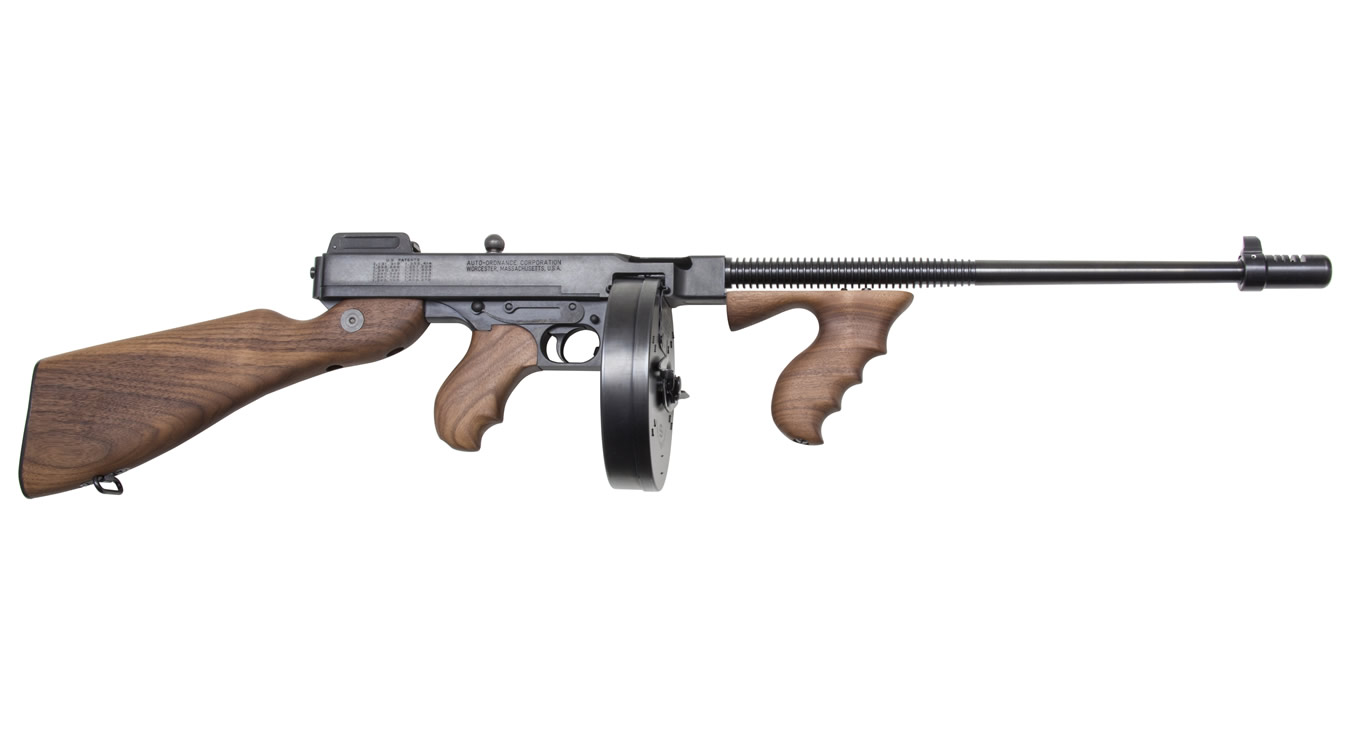 All the classic details of the time honored original are reproduced in today's semi-auto Thompson. The frame and receiver are machined from aluminum. The wood is genuine American walnut. This .45 caliber carbine features a 16 1/2" finned barrel, compensator and is available with a lighter weight aluminum receiver. This configuration is the most popular model.

Growing up in the 60’s, I played with toy guns. I fondly remember my six-shooters filled with caps in my holster, and I remember the wooden Tommy gun that clacked when I squeezed the trigger. I was fascinated by the gangster era and the tales of the Tommy gun. Amazingly, I didn’t ever imagine myself doing harm to anyone or anything and I didn’t grow up to become a criminal. I was simply allowed to act like a boy, as we were in those days. My how things have changed. I had no idea the Tommy gun was still being made, but when I found out I had to have one. Soon after ordering, my FFL called to tell me to come by and pick it up. I opened the very nice hard case in which it arrived and there was my own Tommy gun in all its glory. What a beautiful, nostalgic piece of history it is. For what I consider to be the reasonable price of under $1800, the gun, hard case, 100 round drum and 20 round stick magazines were all mine. I have not shot the gun and I may never shoot it because I bought it to admire and to pass on to someone who will appreciate this for what it is. This is part of the history of the United States of America, but for how much longer will it be available As politicians wrongly convince more and more gullible, short-sighted people that the solution to crime and psychotic behavior is gun control, guns like these will become only a fading memory. I didn’t want to wait until the last vestiges of good sense got trampled in this country and it was too late to own my very own Tommy gun. This is a lot of gun for the money and it’s made proudly in America. It’s a work of art.

I bought this gun a couple years ago it was a bucket list gun I always wanted its beautiful but regardless of stick mags or 100 red drum there are a LOT of failures to feed over wide range of ammo cheap and expensive but all brass no steel - looks like it. Eeds filing down on part of the reciever you can see where they all get hung up - i know its a remanufacrure of a very old design but for this much money it should work properly and it does not.