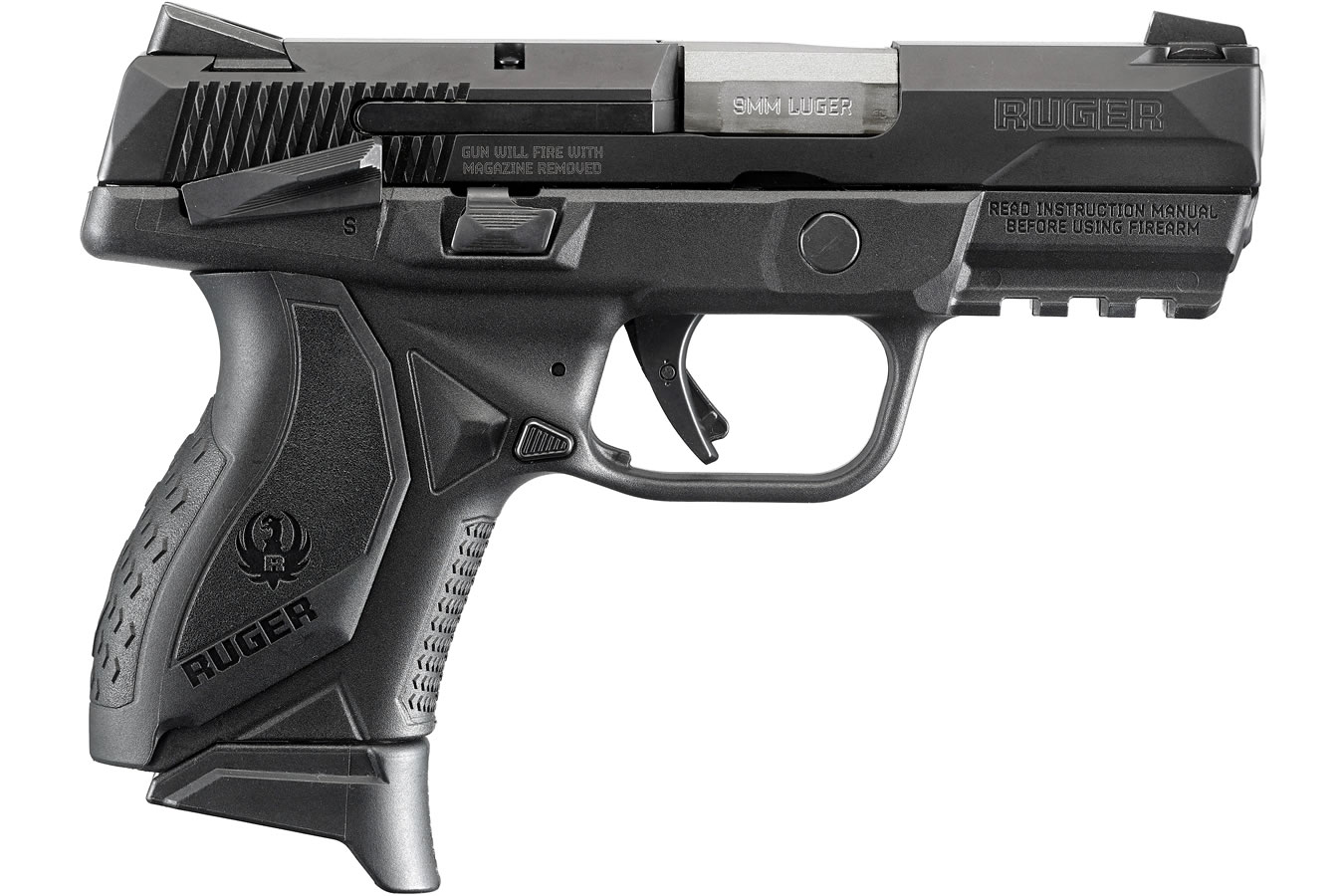 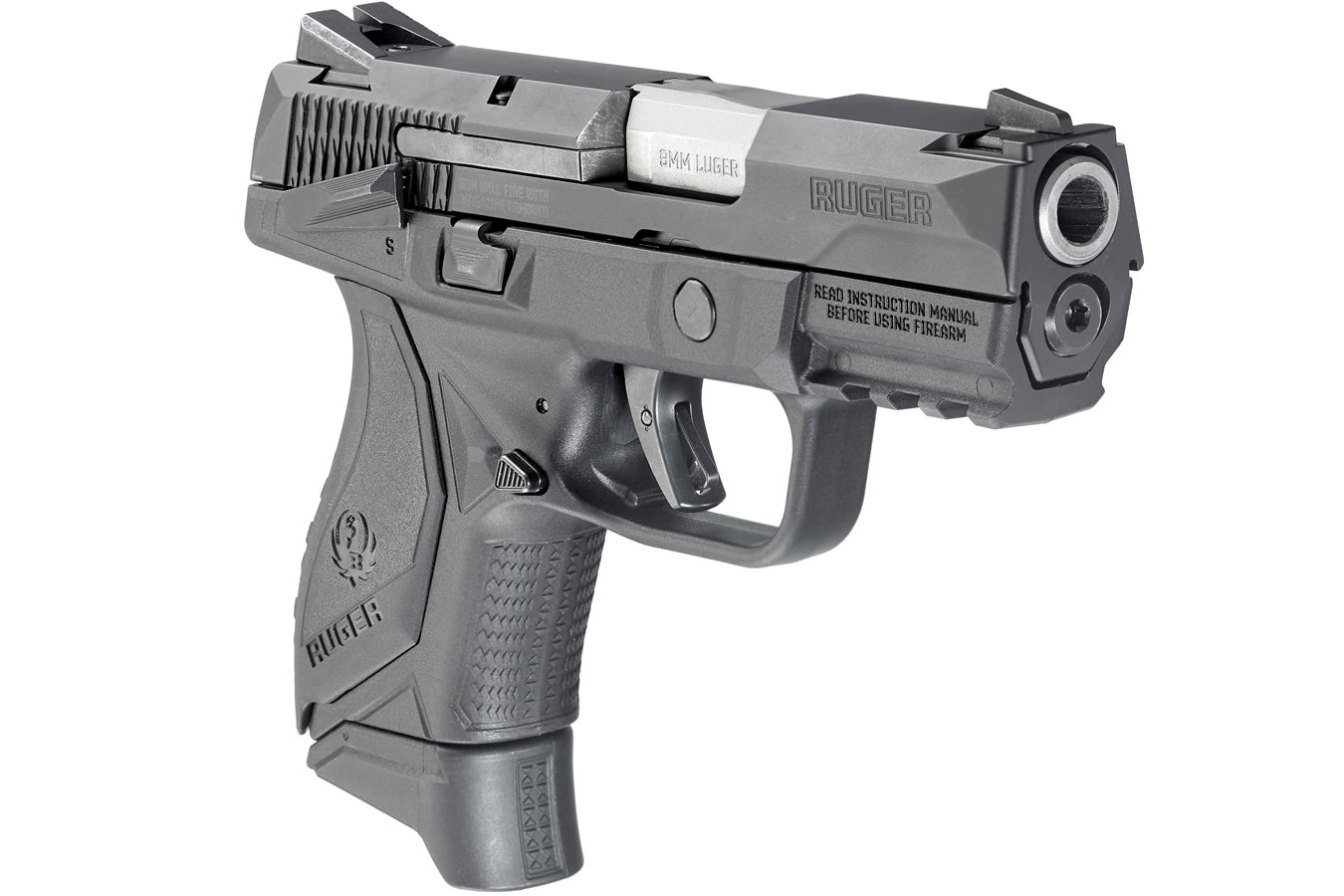 This Ruger American Pistol Compact is chambered in 9mm Luger and is configured with a manual safety. Originally introduced in December 2015, the feature-rich Ruger American Pistol was designed with the latest U.S. Military standards in mind and was tested in the harshest environments to ensure the rugged reliability consumers have come to expect from Ruger.

With a 3.55" barrel, overall dimensions of 6.65" long, 4.48" high and a weight of 28.75 ounces with an empty magazine, the Ruger American Pistol Compact model shares all of the features and rugged reliability of the duty-size gun in a smaller, lighter, more concealable package. It ships in a hard case with small, medium and large replaceable grip modules and two nickel-Teflon® plated steel magazines (one 17-round extended magazine and one 12-round compact magazine).

Disclaimer - I'm a Ruger fan. They've built a brand on reliability and ruggedness, and the occasional weird safety issue aside, I have never had a Ruger firearm I wouldn't trust to protect myself and my family. So naturally this caught me 100% off guard.

I received the pistol Saturday morning from my FFL. Mags seemed to wobble quite a lot side to side, but I figured I could learn to deal with it. Left-handed slide release really does not work correctly inconsistent, requires tremendous force and does not always disengage, but I'm right handed and generally use the palm of my support hand to bop the slide release on a gun like this anyway, as it's generally a nice gross-motor-skill action that requires very little force and very little precision to execute.

Took the gun out today to try to break it in. Third or forth shot was a light primer strike, immediately fired by a failure to eject. This would continue for about 350 rounds, with every magazine having at least two light primer strikes and at least one FTE event. Used an assortment of different ammunition's as I anticipated this might initially be an issue, results were consistently bad across, Winchester white box, S&B 115gr FMJ, Fiocchi 115gr FMJ, Federal RTP, and Blazer 147gr. I found this upsetting, but elected to detail strip and deep clean the firearm to remove any residual preservative/packing grease or metal kerf from the assembly process.

The striker channel had an alarming amount of metal shavings in it, which were removed by way of Q-tip. The Nylon striker guide does not inspire a lot of confidence. It looks and feels like something you'd find in an affordable airsoft gun. What really ruined this gun for me is 36 hours after pickup from my FFL, no less was that attempting to reinsert the takedown pin caused it to break, making it impossible to reassemble the firearm.

2 out of 5 stars for performance because on the off chance that it would fire without FTEing or light-striking, it was controllable and accurate, pointed naturally, and had very pleasing ergonomics. Wow, Ruger. What happened, guys?

This Ruger American Compact is an ideal concealed carry high capacity 9mm. The grip is long enough to get a full hold without having to use the extended magazine. The three blackstrap sizes are spaced so that anyone can have a comfortable trigger reach. The palm swell is actually designed to fit in your palm, and not below your palm like many others. The low bore axis, extra few ounces, and recoil reducing cam make this an extremely stable shooting platform. Trigger is a true single action, not spongy and reset is good.
If you like a manual safety, the safety lever is in the perfect position for easy manipulation with your thumb. The Ruger American compares favorably to more expensive models from Walther, H&K, Glock, and S&W.

Looks great, a great shooter, reliable, and looks great! Did I mention it looks great. The only negative about this gun, is that it is a bit on the heavy side! I love this gun!

Bought this pistol as my first purchase online and from SOSS. The gun was delivered earlier than expected and is a great value also. This is just a solid work horse Ruger has put out. I can't say enough good things about my experience with Sportsman's Outdoor Superstore. Thanks!!

(5 out of 5) Excellent firearm, excellent distributor
by Conor from Yakima, Washington on June 4, 2017

This was my first online purchase, and it went off without a hitch. They had the information for my local FFL on their website so I just called them and they said send it on over! SOSS shipped quick enough, but definitely has the best price. I saved $200 buying it here instead of any gun shop in my area. The gun itself is excellent. 500 rounds and not a single malfunction. That's with steel case, aluminum case, brass case and brass jacket, and hollow points. I've fed this thing the crappiest ammo I can find and it keeps going bang. It is pretty heavy but a very nice Alien Gear holster and I can carry it all day. If you are trying to decide whether to buy this gun or not, buy it and you won't be disappointed. If you are trying to decide this gun or another gun, can't really help you there. There are so many excellent firearms out on the market!

I love this pistol. So far, I've only fired 200 rounds but it ate everything I threw at it - Remington, Blazer, and Perfecta. It is very accurate and surprisingly soft shooting for a smallish 9mm. It's also built like a tank and very easy to break down for cleaning. I plan on firing 200 more rounds through it and a couple mags of SD ammo then it will probably go to the top of my carry rotation. SOS was awesome also - great price and reasonably fast shipping.