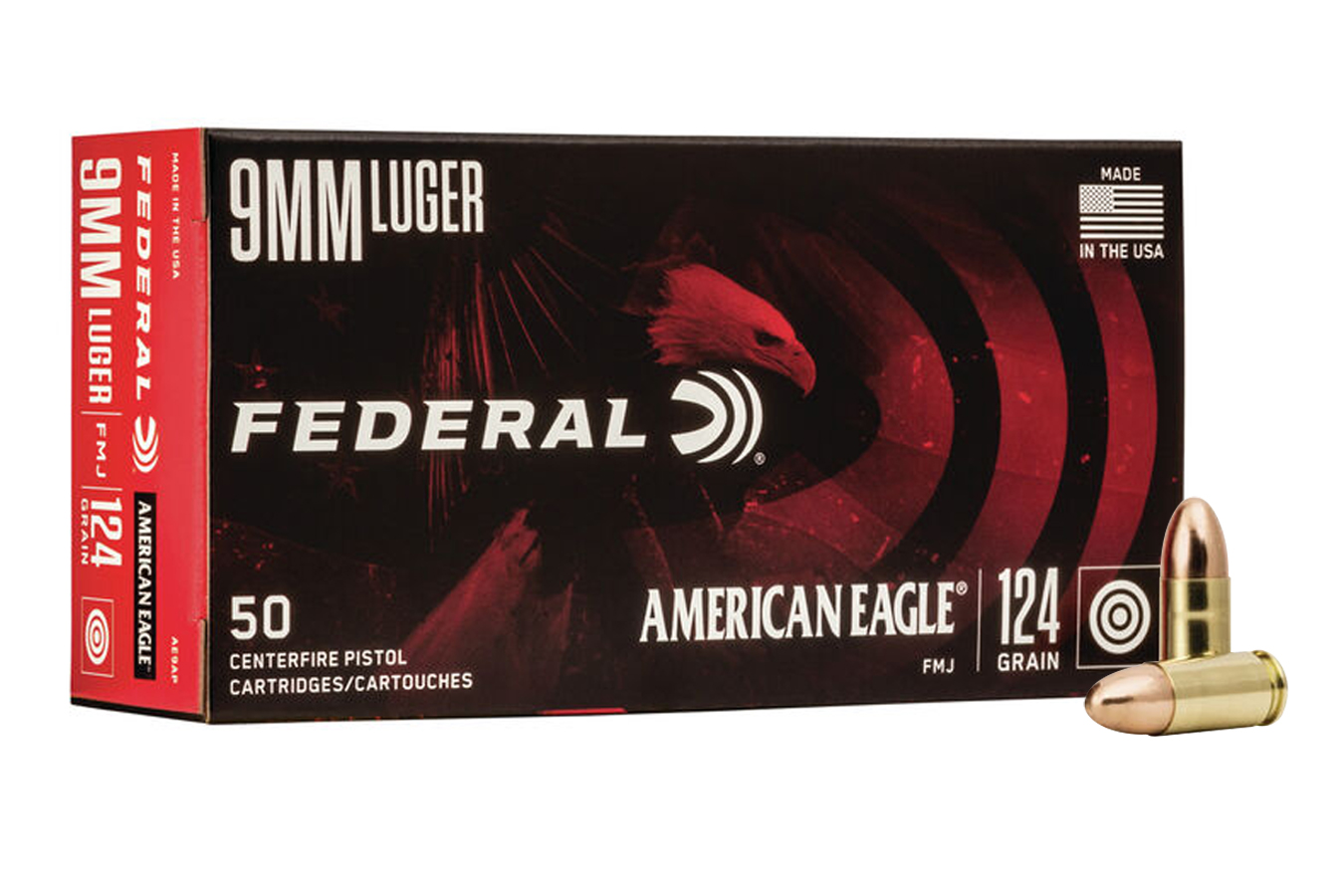 Whether you’re looking for contemporary calibers or a couple of classics, the American Eagle line has what you’re looking for. Loaded with clean-burning powders, Federal grade primers and brass, and a choice of bullet styles, shooters know they get quality and affordability with American Eagle. Many of these practice loads offer ballistic qualities comparable to our Premium Personal Defense rounds.

My order arrived intact and ready to use. Thank you Sportsman's Outdoor Superstore for your superior customer service and thanks to Federal for the best ammo out there!

Having shot 9mm for the better part of five decades, 124-gr seems to be the best compromise projectile weight for this round that ranges from 88-gr super vels up to 147-gr. 124-gr is nasty when you can get it at some of the 1200 fps Euro or NATO loadings. This Federal AE9AP is somewhat tame at 1165 fps, but the price is right and Federal makes some of the most consistent ammo on the planet. My G17L and PC9 both love this flavor and it does what it is supposed to do without a hiccup.

What I love about this ammo is that it practically mimics, in both accuracy and felt recoil, with their HST defensive line of ammunition. In both my 4" Glock 19 Gen 5 and Walther PDP 4.5", the ammo has practically the same velocity and point of impact as their 124 and 147 grain HST line. I haven't received my shipment yet, nor have I heard anything as far as a tracking number goes and I ordered 4 days ago from this company so I can't speak on packaging and shipping times yet but I've used this ammo in the past so I can at least speak on the ammunition's behalf. Looking forward to hearing from Sportsman's for my shipping info! I'll update review once product is received!

Some of the best ammo ive used. Great service and shipping.

Arrived on time and in excellent condition. Will definitely be shopping here again!

I have used this ammo for years and not a single failure. Very accurate.

Great training ammo. Shoots clean, feeds reliably. Switched over from 115 grain to this. It seems to be generating less muzzle jump. Great price, I will be ordering more.

What can I say about this ammo other than it performs well and not one FTE has occurred from my handguns using this fine ammo during the past 4 yrs. Your barrels don't get all dirty with this ammo. Great price on here and will buy more. A fine product is all I got to say.

You'd be hard pressed to find 124gr 9mm ammo this cheap in any sporting good store.

This is not cheap ammo. It is only being sold cheap. Been buying and using it every time I see it on sale.