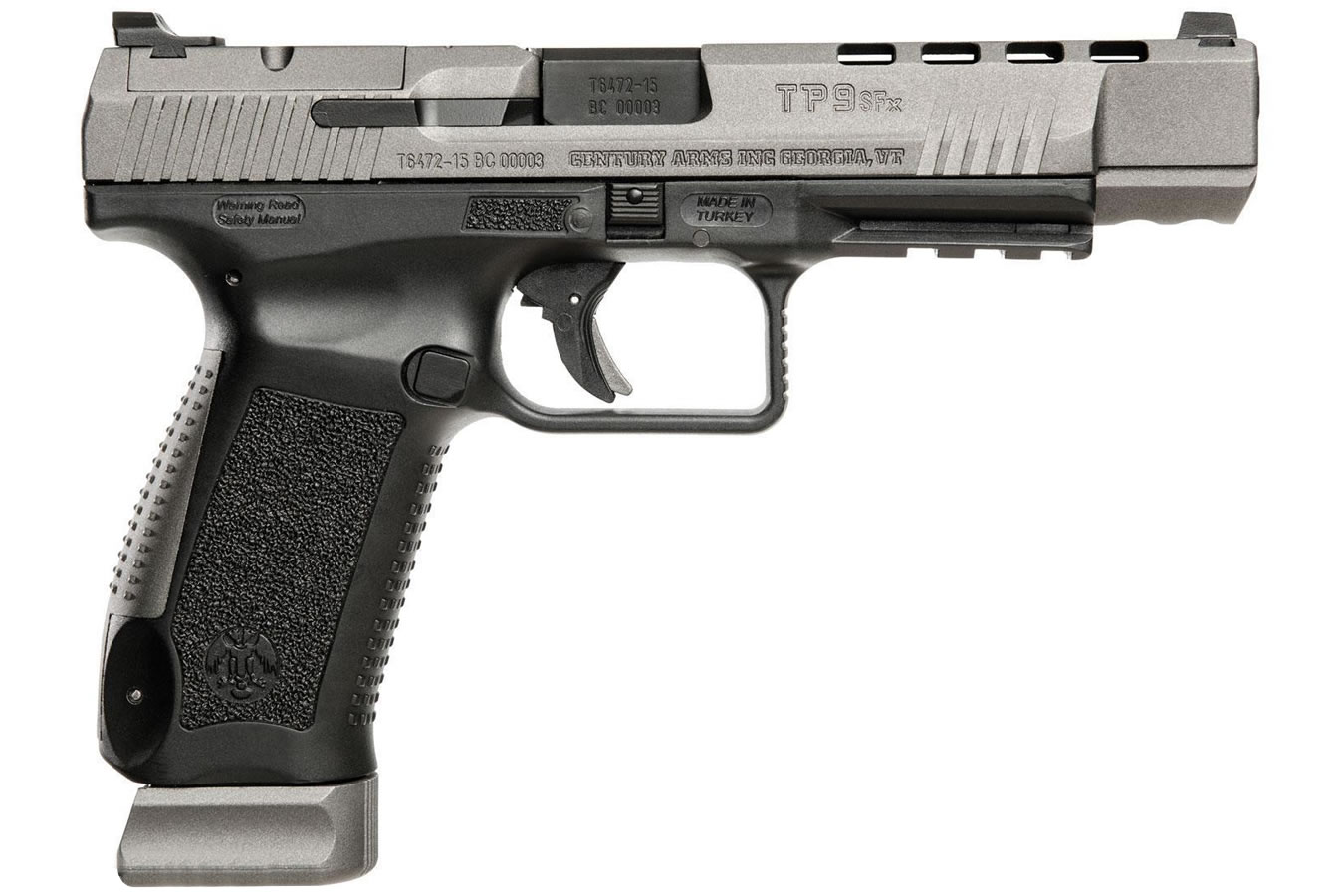 Feast your eyes on the newest match king for the masses; the affordable Canik TP9SFx. For starters, the TP9SFx comes with industry standard dovetail sight cuts that are compatible with a large variety of aftermarket sights. The tungsten grey cerakote over phosphate finish and AFC magazine complete the sleek look of this pistol, which also includes 4 Red Dot interface plates and an ambidextrous cocking lever.

When I first shot it with 9 mm 115 grain Winchester bullets it would stove pipe terribly. Every other round. I was ready to throw it against the wall and be done with it. However the range master suggested switching to 147 grain 9 mms. That did the trick and it has never malfunctioned since. I called the company and they sent me a lighter spring that I havent tried yet. I still have the 147 grain ammunition. it is worth every penny that it cost me. Very, Very accurate. the red dot is good except that when the battery needs changing I have to remove the sight and put the battery in the bottom and then remount and re-sight it in. Vortex, plain and simple should have engineered it better. Other than all of that it is a spectacular purchase that rivals my Berettas and Walthers.

One heck of a pistol for the price!!!!!!! Very satisfied.

I just got this gun and fired it yesterday for the first time, About every 2- 3 shots the thing would jam ! The spent shells are not extracting. I thought I was doing something wrong, so I had my friend shoot it with different ammo, it did the same thing.

Initally I had a few stovepipes so I was second guessing myself if I purchased a good 9. I decided to look up and see if anyone else had this issue, Possible I was limp wristing it but on U-rube I found someone else had the same problem. Well problem solved all I had to do was change the recoil spring assembly using a sprinco recoil bar assembly. Since then I have probably put at minimum 500 rounds gotta save the ammo now and its just a great buy. My gunsmith checked the trigger pull and he was quie impressed as it breaks at only 4 pounds. I would say best 20rd for the price. I have a Sig about 20yrs now but that will never leave my stable

I am a big time SIG snob and now I have a new favorite in the tp9sfx. It delivered 1 inch groups at 7 meters in the first magazine. Great trigger. It is lighter with a light on the rail, 20 rd mag loaded, and my burris fastfire3 on it than my sig220 is and has double the capacity.My one and only complaint is that I do not like using the tool kits allen wrench on the pistols fasteners as it is not really the right tool for the job and will eventually round the heads of the screws. A torx fits better. I have put critical defense, black talon, and other hp rounds thru it with no issues ever. It is still not even broken in! I will 100% be getting another canik model. I had some questions and Century answered them all the next day. Simply put, I love this weapon. Charging handle is fantastic.

Excellent handgun especially for the price. Great accuracy and feel, looks amazing. Have fired 300 rounds no failures, felt recoil is superb and the trigger is smooth with an excellent reset. Comes with 2 backstraps, I have large hands with long fingers keeping the original on it.
The mag release has several changeable sizes and being left handed it is reversible, took some time but you tube helped a lot. Came with 5 sight plates to accommodate almost any reflex or red dot sight. The sights on it are great. Buy one you can't go wrong!

I just sold my Glock. This weapon is the most accurate 9mm I have ever had.  The only reason I still have my other 9mm is that it's not worth the time to sale them.