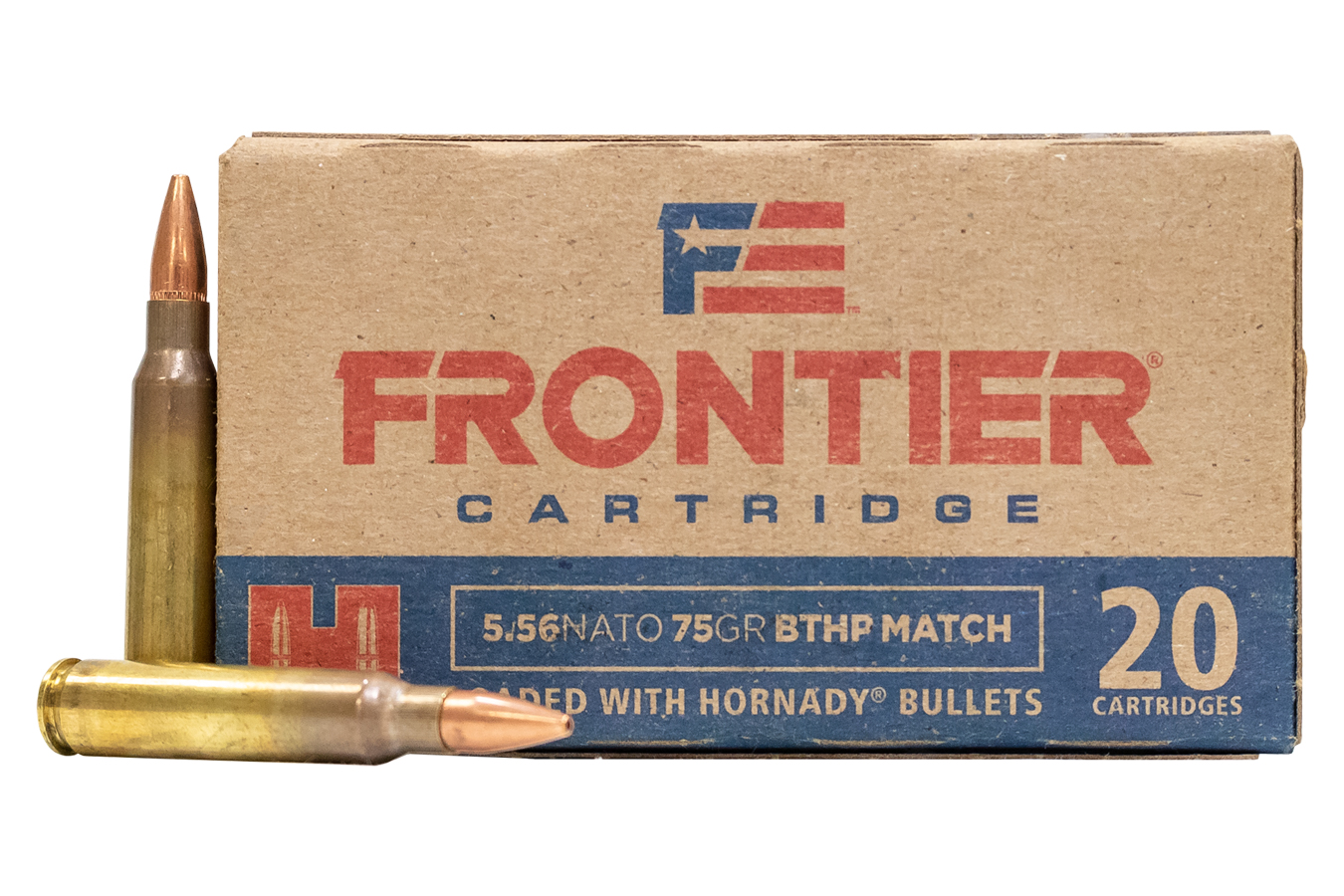 Shooting 3-shot groups at 100 yds. Yeah, I know if it's not 3 10-round groups and 30-round composite overlay it don't count, yeah right. But 3 round groups I'm getting 1/2 MOA some sub 1/2 MOA repeatedly with my Ruger 556 MPR 18-inch barrel 1 in 8 twist 5 R rifling rifle length gas system this rifle loves this ammo. Every barrel's different but this is worth a try. Maybe your rifle likes it like mine.

What a great product and super fast shipping shipping and reasonably priced! Thanks

So I purchased some of this ammo, some fiocchi 69 gr sierra match, some hornady black 75 grain bthp, and some hornady frontier 55 grain bthp match. I shot them today from a rest but not a fully stable lead sled or anything like that. I was shooting at 100 yards out of a 16inch 1:7 twist with a vortex strike eagle 1-6. I got 1.5 inch groups, but I know I would be able to get it tighter. This frontier ammo seemed to be the winner today. Im curious to see what would happen at longer distances, but this ammo seemed to do the best and it was the cheapest except for the 55 grain hornady match. The other ammo did do very well FYI, but at the end of the range session, I decided to zero my rifle with the frontier 75 gr BTHP match ammo before packing up and leaving.

I tested this ammo out of my 18 DMR/Mk 12 modern sort-of-clone with 1:7 twist, and decided to settle on this ammo as my go-to ammo. It shoots faster than expected considering the rounds are 36% heavier than M193, shoots much flatter passed 200 yards than M193 or M855, and retains twice as much energy as M193 at longer ranges. From the dope Ive ran shooting these, the manageable drop has shown these stay supersonic beyond 900 yards. No keyholing ever, have yet to have any FTFs or any other issues. Shipping was great from these guys. Ordered ten boxes early on a Tuesday morning, and they were delivered at my door 2 days later!

I hit the forums about this ammo and its purpose for deer hunting and heard mixed reviews. I ended up purchasing some anyways because local shop had nothing in stock for quit some time it did exactly what I needed it to. Harvested a nice size doe last season one shot through the lungs she ran 10-15 yards and dropped clean shot straight through with a nice hand dollar size exit wound.

Great product that delivered on time. Grateful to be able to receive ammo during these times.

Good and cheap ammo hard to get right now. Shipping took time of course but once I had it took it to the range found it to be pretty accurate. Smoke does have a distinctive smell, kinda stinks but nothing overly concerned with. No jams or duds. Now I buy all my ammo from here

Great stuff, shoots just over m.o.a. out of my Ballistics Advantage 20 spr barreled Aero XM4. No ftfs with several hundred down range.

The Frontiers seem most accurate out of my 1:7 16 free float but I've been using 55 gr so I grabbed these 75 gr expecting even better performance. Impressive part is that even during this coronavirus hysteria the rounds were at my door in 2 days!!!

Found these through a search I went on looking for a decent round to hunt some coyotes. The 75g is pretty stable out of a 16” 1/9 twist. After zeroing at 36yds I set it out @100yrds. I had 1.1” groups with the occasional fliers.
Customer service Carol H. & Kaitlyn K. hooked me up on a address change after a stressful weekend worrying if I’d catch em before it shipped. Thanks ladies!! Shipping was fast and packaging was good. Wish I could attach some pics!

The best possible ammunition on the market for the price point! It's accurate and absolutely reasonably priced for the performance given. It's more accurately priced per round than Black Hills Ammunition. Black Hills MOD 262 77 grain OTMs are super hard to beat for performance, however, at over $1 per round I would expect nothing less.
I have a G2 Precision TNQ MK12 SPR with a Proof Research Carbon fiber wrapped .223 Wylde Barrel and with this setup from the best of the best. Less than .5 inch groups are easy and repeatable every time. These 75 grain Hornady's will no doubt group at 300 plus yards! At 100 yards I was able to obtain .25 inch groups or in some cases smaller 3 shot and even 5 shot groups. Outstanding and amazing ammunition.

I sighted this ammo in for the first time over this past weekend. I was shooting off a bag and sand sock. I have an 18 spr profile 1/8 WOA barrel, geissele match trigger and a NF 2.5x10x42mm scope. I did achieve moa accuracy even out to my 500 yard target. I was laughing with excitement.

Best bullet for accuracy and cost on the market!!!

I have went through almost 1,000 rounds without any failures. Very accurate in my 1:7 twist barrels. 14.5 and 20 inch. Sub MOA accuracy at 100 yards. Love this stuff and the price. Best place to buy online I have found.

The ammo produces MOA accuracy out of my WOA 20 build. Sometimes sub MOA. Depends on how I shoot and conditions but it's definitely capable and definitely worth the price point! This is all I've been shooting for the past few months!

Most accurate ammo for the money! Always cycles and fires, plus sub moa accuracy in any 1.7 twist gun I own!!

First off, I am only an amateur marksman on a good day. Been shooting irregularly for 27 years, but a lot less than most enthusiasts shoot in only a year or so. So I am by no means an expert. That being said, the Hornady bullets seemed pretty accurate, when they fired. That last part is key. I tried 60 of the 55 grain hollow point, and 60 of the 75 grain hollow point boat tail, as well as a couple of other brands.
At first I thought it was the new rifle, until I realized that the only bullets that jammed were the Hornady bullets. Around 1 to 3 per magazine using 10 and 30 round mags. Sometimes they would jam inside the gun, other times when ejecting, but on average about 1 or 2 issues per 10 rounds, and more often than not on the first round chambered and the 3rd or 4th ejected. When they fired, they fired as accurately as the other brands I fired.
I'm an amateur, so take that for what it's worth, however you probably should not use them in any situation where you cannot afford to spend a couple of minutes working out a jam. In other words, if you can get them cheap for a range day, or if you want to train folks how to unjam a gun, sure, go for it. For hunting or home defense, find another manufacturer.

I shoot long distance often. 200 yards is closest, 600 yards is standard. I shoot in windy conditions, during winter, summer. I chronograph my loads and have ballistic charts for different T/RH. So far, I found that you get what you pay for. It is awesome that you can get 75 grain 5.56mm ammo for $0.40 to $0.45. But don't expect this ammo to be $0.50 to $0.60 IMI razor core 77gr OTM. As you should not expect IMI razor core to be $0.85 to $1.00 Black Hills 77gr OTM, as you should not expect anything to be as good as $1.25 Black Hills 77gr TMK. I shoot all of those in various weather conditions and across wide temperature ranges.
Again, for $0.4 to $0.45 this is an excellent price per round and I just bought some from Sportsman's. Will be buying more. Velocity out of 20 inch SS 3R and 18 inch SS match barrels is ~50 fps less than Black Hills or IMI razor core IMI is actually ~15 fps faster than Black Hills out of 16 inch 1 in 9 chrome lined barrel obviously IMI is tuned for shorter barrels that Israel army uses. Ballistic coefficient is 0.355 I question that since Hornady is known to over promise and under deliver, like velocity that is 100+ fps slower then their box states, which is not as good as SMK OTM BC=0.372 or TMK BC=0.425. At 600 yards with my 20 or 18 inch SS using IMI Razor Core 77gr. I group close 7 to 9 inches. While using Black Hills close, I group 7 inches without sweat. With Black Hills TMK it is easy 6 inch groups, if I do my part. Same rifles, same conditions back to back I cannot make Hornady 75gr group better than 10 inches. And if there is any kind of wind it opens up significantly.
Having said that I bought quite a bit of this ammo. For the money this is an excellent round. I gave it 4 stars only because they overstate their velocity as usual.

I consistently get 1/2 MOA @ 100 yards when the wind isn’t gusting out of my stock. My 16” Springfield Saint Edge 5.56 was also purchased here. I can’t say enough good things about this ammunition. It is uniform, accurate and a dream to shoot. Wish I could upload pictures!

Rated: Next to IMI Razor Core 77gr, my standard round 20BL 1:7- Comparable, in every way!
At 100 yards, grouping was virtually the same as RAZOR CORE. Both were entirely capable of 1-1.5 MOA. Moreover, Same point-of-impact as RAZOR CORE, so I don't have to re-zero and can go back and forth between the two. That's fantastic! Overall, extremely surprised considering price is almost half of the RAZOR CORE! I'm sold!! Keep up the production, Hornady! You definitely got a winner with this one. That's the only real issue with Hornady, you get hooked and they discontinue it. So, Buy all you can! Sportsmans Outdoor Superstore, Best Price you can find.

This ammo shoots the best out of the many heavy OTM/BTHP that I've tried. Sportmans Outdoor Superstore has the best price too! When I run low, I'll definitely order from them again.