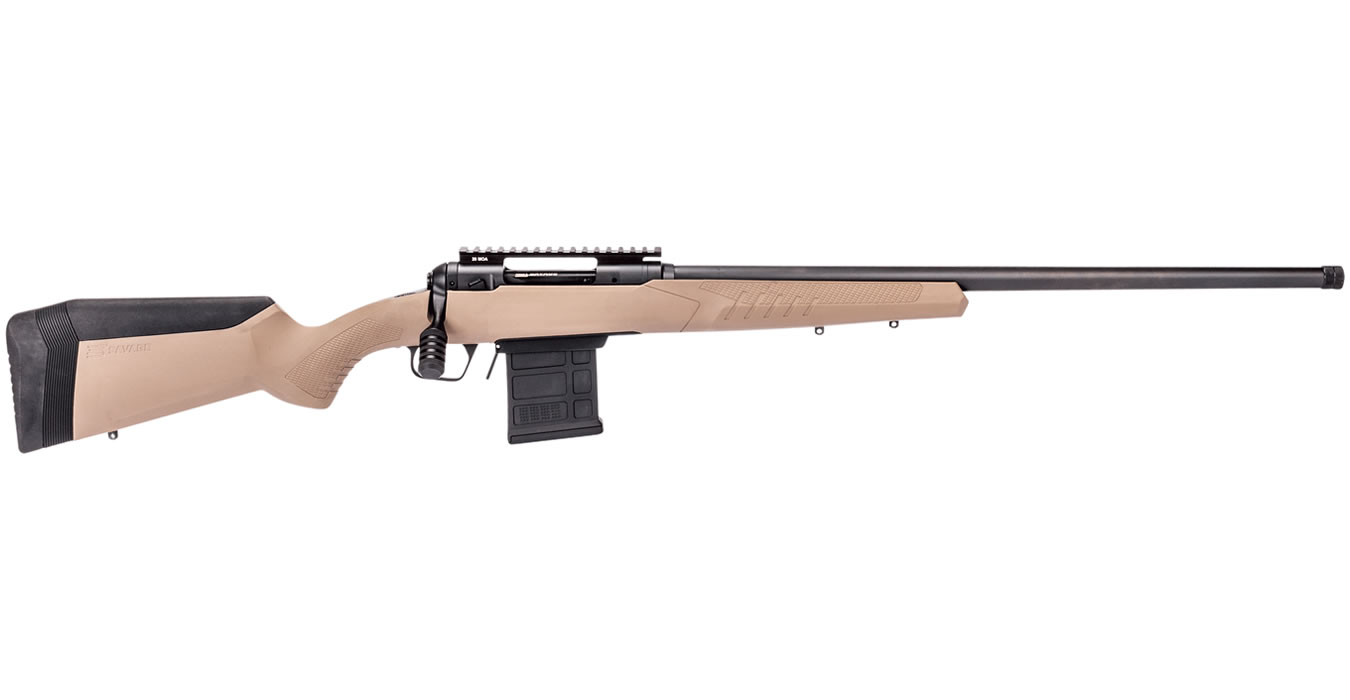 When the stakes are high, settle for nothing less than the precision and adaptability of the Savage 110 Tactical Desert. The rifle’s AccuFit™ system lets tactical and competitive shooters customize length-of-pull for the utmost consistency, and the user-adjustable AccuTrigger™ provides a light, crisp pull. Together with the AccuStock™, which secures the action three-dimensionally along its entire length, the 110 Tactical provides the fit and function of a custom rifle—right out of the box. It features a suppressor-ready threaded barrel, a one-piece scope rail and 10-round detachable box magazine.

Every new Model 110 delivers the customized fit required for consistent accuracy— and it starts with AccuFit™. Five comb riser sizes let you lock in the perfect cheek-to-stock weld for fast and consistent target acquisition and enhanced accuracy while four composite inserts establish your unique length-of-pull.

Only complaint is grip angle is not cohesive to bench shoot.

The rifle is awesome! It certainly shoots sub-MOA. Ttigger is easy and crisp. The only issue, which I quickly resolved, was that the piccatinney rail was not screwed down on the rear so that the 20 MOA rail was more like a 40 MOA rail

This gun shoots awesome with factory match .30 5 shots at 100yds.Hand loads shot .18 at 100yds. Don't even hesitate buy it. Truly a steal at this price.

My 6.5 came with the Magpul AC 7.62 10 rd magazine, not the savage brand big upgrade. Wish the combs were a little bit longer but understand they need to allow for bolt removal. Will probably add some padding to suit my preferences. Only 10 shots down barrel, 7 rounds of Federal GM Bergers to get on center, rounds 8-10 went .586 I cant wait for the barrel to tighten up.

I have been very happy with mine so far, around .5 moa 5 shot groups with 140 gr American Gunner. Feeds and extracts well so far with a fairly smooth bolt. Topped it off with a Vortex Viper Gen 2 5-25 and a Harris HBRMS bipod for a great combo.

After testing a few different kinds of ammo this rifle seems to like Hornady American Gunner 140gr BTHP. Shot a 0.72 inch group at 200 yards but I feel like it can do better. Seems to be built well. Had to tighten the scope base after shooting so do that before you mount your scope. The included Magpul PMAG was nice. Overall very satisfied.