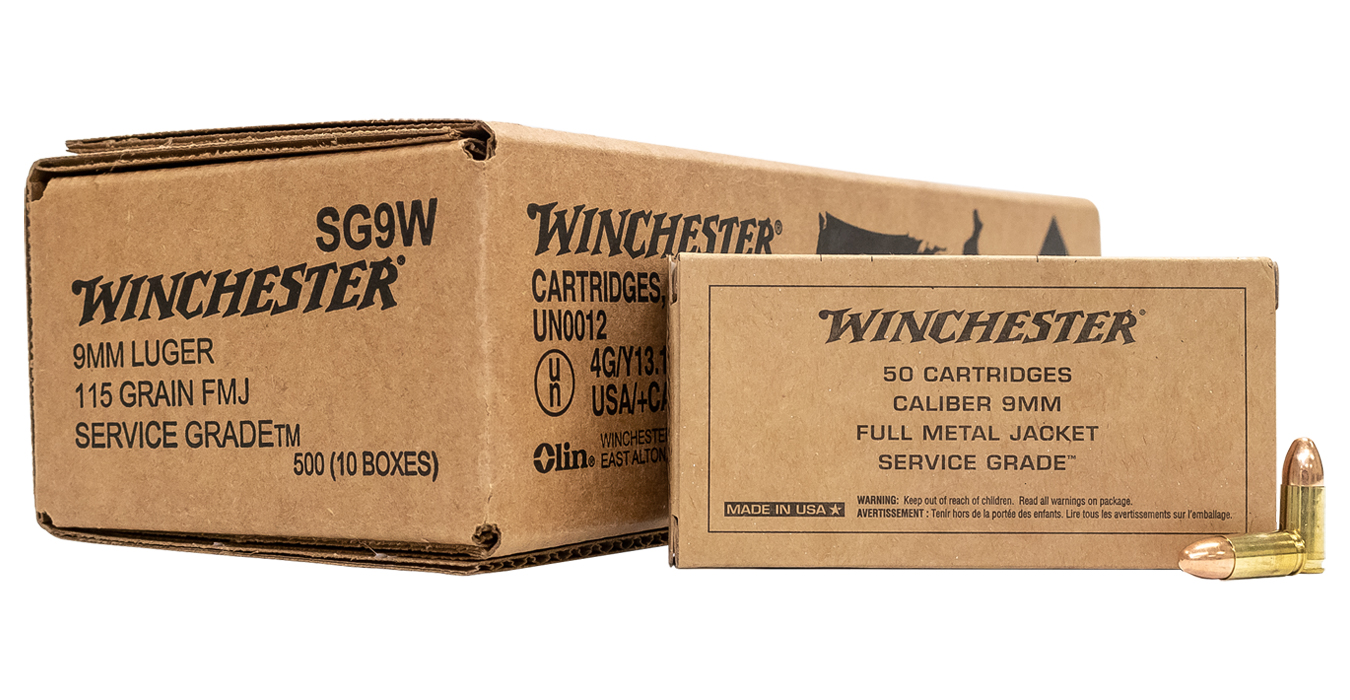 Winchester 9mm Service Grade ammunition is Winchester's newest addition to their line of Made in USA range and target shooting ammo. This new round features a full metal jacket, 115 grain bullet, loaded in brass cases, making it highly reloadable.

This Service Grade ammunition comes in a full case of 10 boxes, giving you a total of 500 rounds.

I'm really impressed with this purchase. This Winchester 9mm ammo shoots clean. It's the best I've used so far.

Bought 500 rounds of this ammo..very good for plinking. It's also very clean and cheap. Well recommended to try this folks.

I order it on Wednesday night and got them on Friday night. Great custumer service. I’ve already shot about 600 rounds from my previous order, never had any issues. Reliable and accurate performance from Winchester. No one can beat SOSS prices. My number one choice for online shopping!

I've shot 400 rounds of these bullets so far through 3 different guns and have had no issues whatsoever with any of them. Punches nice holes in cardboard like 40 cal, which saves me footsteps and time to my 15-25 yd targets. IMO it's as accurate as WWB or Blazer, so I just picked up another 1000 rounds. Thanks SOSS!

So far I've ran 200 rounds in my Sig P320-X5 with no issues at all, and were marginally accurate, I was using Wal-Marts Winchesters 115gr. white box and averaged about 2 to 3 failure to ejects for every 50 rd box i used, so I'll continue to use these rounds, my fingers were little dirty from loading rounds and gun was a little dirty from using them, so they're not the cleanest, but did'nt bother me since I keep up with my guns. I also ran a few through my Glocks with no issues.

Been shooting 9 for 2 years now. My previous 2 pistols were both 40. Ive never been picky about ammo, as long as it works. I used to buy Aguila 9mm and my friends at the range would tell me theres better stuff. I say, if it works, it works! I bought some of this a month ago, and it works just fine for me. I still have a few boxes or so left, but I doubt my opinion will change after shooting those too.

Purchased 500 Rounds of this Ammo and I am Highly Dissapointed with this Purchase. Have had Several Duds that did not Fire, The Primer was Dimpled but the Bullet did not Fire. Out of Approximately 300 Rounds I have had at Least 15 Bullets that were Duds. No Problem with other Ammo in this Pistol....

I just broke in my new Walther PPS M2 LE edition with 500 rounds. Not one hiccup with this stuff.

Makes bigger holes in the target than my normal round Blazer. I buy Blazer when its cheap, but this was the same price as Blazer when Blazer is 8.99 on sale and I know Winchester has a better rap, so I tried it out. Only noticeable diff was the holes the Winchester made in the target. Much bigger and easier to see from long distances. Thats for any flat nose though. This might be a better deal.

Usually shoot Winchester white box 115 or AE ammo, but decided to try this new ammo out based on the price. Ive gone through 300 rounds so far and cant tell the difference between this and the white box ammo I usually buy. Ill consider buying this again once I run out.

I love SOS. Great value, customer service and a website easy to use and purchase from. This ammo was on sale, so I thought I would take a chance. I am sorry I did This ammo is just inferior. I ran 1700 rounds of the white box Winchester thru my Ruger, not one problem. 465 rounds in to this......ammo..... and I have had 3 failure to ejects. Also, it is some of the dirtiest ammo available. My hands were black loading the rounds, and my pistol was filthy afterward. Slivers of brass and nasty black gunk, taking 3 times longer to clean. I would not recommend using this product