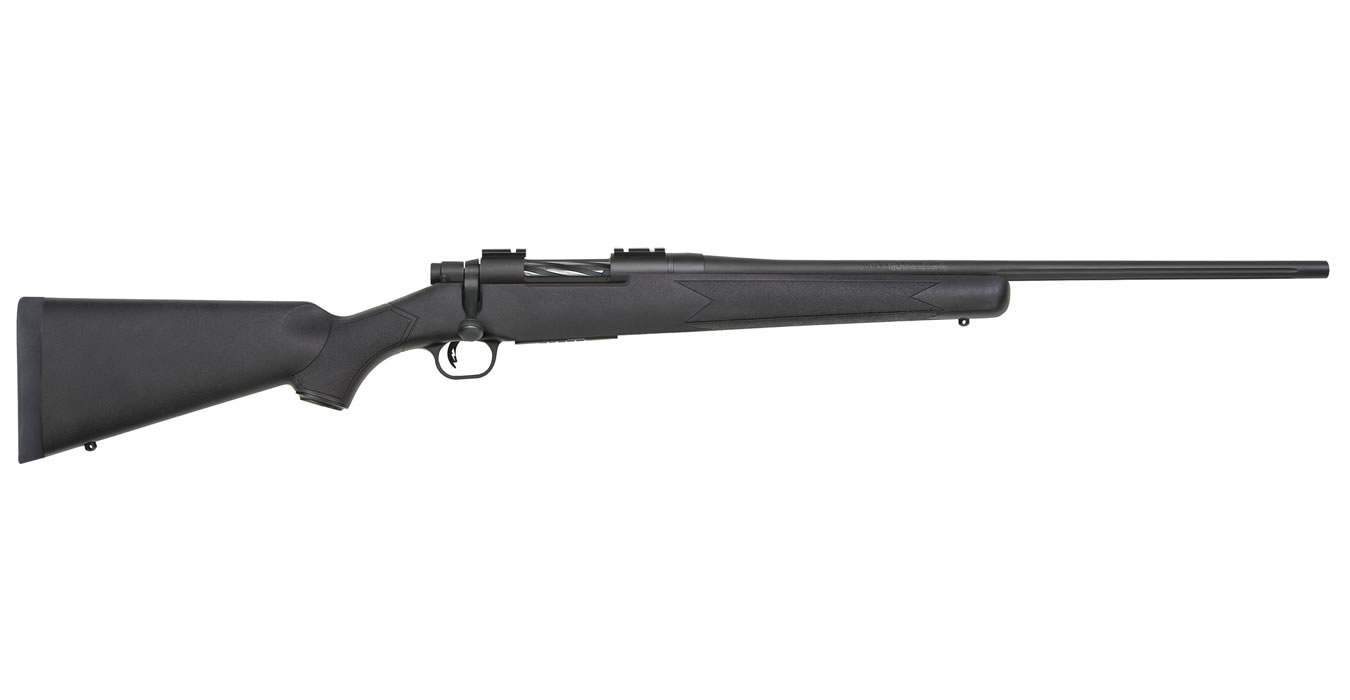 Looking for the latest high performance,straight-walled cartridge offering for multi-game, multi-season hunting? Look no further than the newest offerings from Mossberg; the classically-styled Patriot Synthetic bolt-action rifle chambered in 350 Legend.

Built with hunters in mind, the 350 Legend is the fastest straight-walled hunting cartridge available while offering more energy, less recoil and increased penetration over many of its competitors. Combining the 350 Legend on-game performance with the feature-rich Mossberg Patriot bolt-action rifle makes this duo a great choice for deer, feral hogs, black bear and other medium-size game. Deer hunting opportunities are also expanded in areas where straight-walled cartridges are now allowed in previously-restricted (slug-shotgun, handgun and muzzleloader) zones.

With decreased muzzle blast and extremely low recoil, the Mossberg Patriot Synthetic chambered in 350 Legend makes for a more enjoyable experience in the field without sacrificing performance.

This gun felt sort of cheap and I was skeptical, but after bore siting it through my bedroom window with a red dot, it was in the bullseye on the first shot. After some very minor adjustments, I was getting great 1.5” groups at 50 and even 100 yards with Hornady ammo.
After 60 rounds, I’m very pleased with this rifle, especially considering the cost.

I really wanted to like the rifle but it has too many problems to overlook. The scope that came with it was pure junk, you couldn't even see through it. If you try to sight it in you will notice that BOTH turrets say UP. Good luck trying to sight that POS in. Mossberg was nice enough to send a replacement scope that was exactly the same as the other POS...lol.
I put a new scope on it 3rd one and sighted it in but it shoots all over the map at 100 yds. I've tried every 350 legend round made by Win, Fed, and Hornady in every grain size. I even bought reloading dies and components to try other bullets and powder. Nothing seems to help because it is still all over the map. I've got enough into trying to get it to shoot to have bought a new Winchester 350 legend and a Vortex scope and had money left over. I may have to take the scope off and just saw it in half and put it the trash.

Full Disclosure, I bought this gun somewhere else, but I love it so much I want everybody to hear about my awesome experience with it. In the shotgun only zone in Michigan, and to my knowledge in any other shotgun only zone, straight walled centerfire cartridges have the green light. Last year and at the beginning of this year, I was shooting a Ruger American Ranch in the 450 Bushmaster. That gun kicks the living snot outta me, and to be honest, I am actually kind of afraid to shoot it. It also has accuracy problems, or at least the one I have does, can't group inside of 8 inches at 150 out of a Caldwell lead sled.

Enter the 350 Legend cartridge. I straight up love this cartridge, when I shoot it, it feels like I am shooting a .243 Win, there is very little recoil, and the kick feels controlled, not jumpy. This is the 3rd Mossberg Patriot between me and my grandfather that we have had, so I had zero hesitation placing an order for one. For $350 or less, I don't think you can buy a better bolt action rifle. Several of my favorite things about this rifle will follow.

First, the bolt, I love the Patriot bolts, I have never had one catch, and they're extremely smooth, you basically don't have to break them in. Second, The magazine, I love Savage bolt action rifles in addition to the Mossbergs, but Savage could NEVER make a magazine that works this well. In particular, the 350 legend magazine comes in and out of the gun extremely smooth, and it's easy to load up. Third, the accuracy, my Lord, this is an accurate rifle for the price. I topped the rifle with a Bushnell Banner 4-16X40 and shot the Winchester Deer Season XP in the 150 grain. I sighted mine in at 100 yards and wanted it to be about 2 inches high so I can be zero at 150. I had shots touching each other, I mean, they were perfect, right where I wanted them.

This is a no brainer if you want a 350 legend, especially for the price, BUY THIS RIFLE.

Bought this gun without ever seeing one before. Was finally able to put some rounds down range and Wow am I impressed!! My buddy has the Ruger in 350 legend and this gun is way better in my opinion. Feels like less of a toy. I married it with a vortex 6-24x50 which is probably too much scope but I had it laying around.
With 170 grain American Whitetail ammo I was able to shot 3/4” group at 100 yards and 2.645” group and 200 yards. I have only put 40 rounds through it and accuracy was still improving so I expect it will get better as the barrel breaks in. If you’re on the fence about this rifle I urge you to buy it! If your debating between this and the Ruger, trust me the Patriot is the way to go! Buy it you won’t regret it!