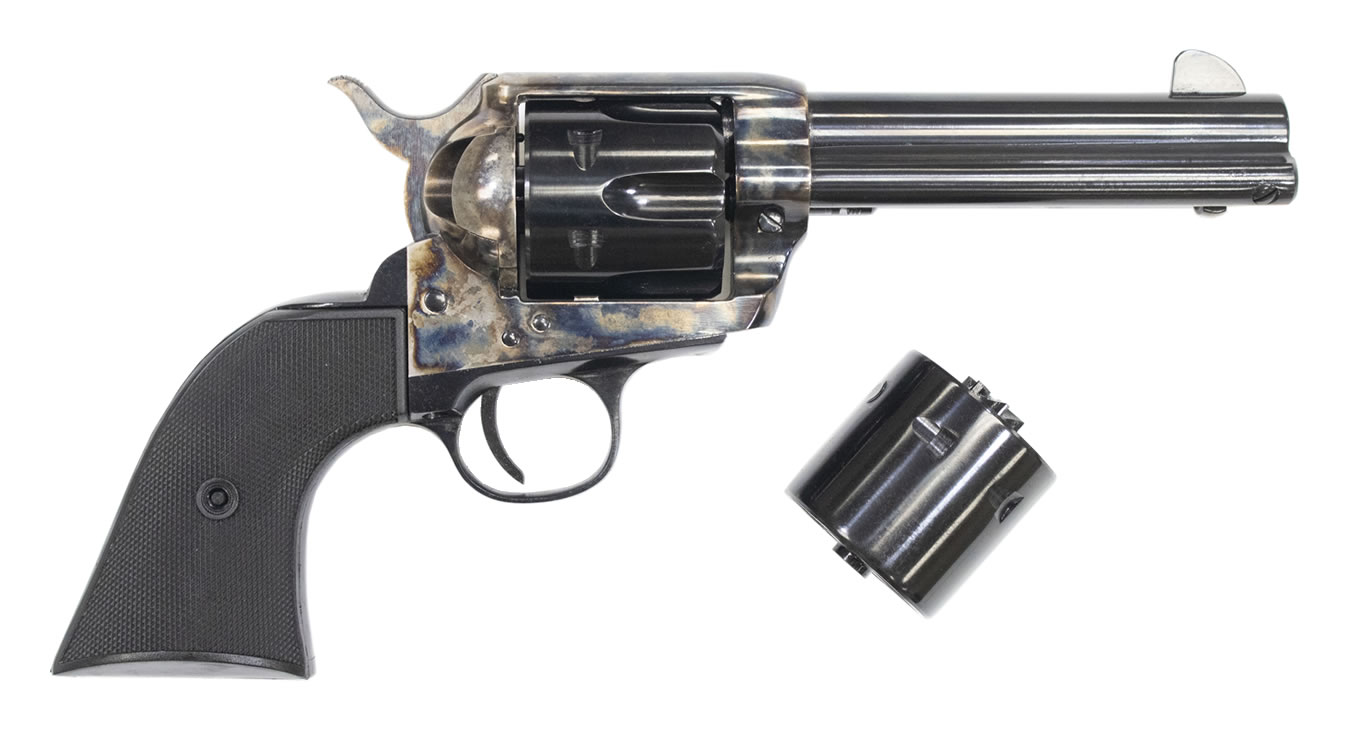 One cannot mention the “Old West” without mentioning the numerous and notorious gunfighters. Pietta researched and developed the most “true-to-original” and most commonly carried pistol of the gunfighter.

Always since I was a little kid, I wanted a 45 cowboy gun. Bought this one and I wouldn't get rid of it for anything.

Im surprised these havent sold out yet, and that there are only 2 other reviews at the time of me writing this review. I looked around at several websites for a good deal on a Colt Single Action Army clone and this is easily the best deal I found. This particular gun is a very authentic reproduction of the Colt SAA, 4 clicks of the hammer, firing pin on the hammer carry 5 with an empty chamber under the hammer, etc. The grip frame is made of steel instead of the brass frame that these guns have on EMFs website, this may be a Sportsmans exclusive thing and this is how the guns should be. The original colts never had brass frames! The 45 ACP cylinder is a huge reason I bought this, I wanted to have the gun in a historically accurate caliber but also wanted to be able to shoot much more common ammunition, the 45 ACP cylinder is great for that. Also, those cylinders by themselves are quite expensive, and the total cost of this package is less than most other similar guns I could find that didnt even include the second cylinder! Havent shot this gun yet but it seems very well made, I inspected it on arrival and the only issues are the cheap and ill-fitting plastic grips and the cylinder axis pin that can be tricky to get in and out, as well as that bizarre safety that this gun has with the two notches on the cylinder axis pin. Dont try and fire this gun with that pin in the fully rearward safety position or you could damage the gun. Anyways, long story short this is an amazing deal on what seems to be a really well made and authentic reproduction firearm.

I called EMF after reading the review before me and spoke to Debbie there. Very nice person. She let me know that every gun now had the correct cylinders. I took her word for it, and bought one. Super glad I did. Ive used both 45 Colt and 45 Auto through each cylinder and it works miracles! Im very happy with the customer service I got from EMF, even before I owned the gun. That gives me piece of mind that if anything every goes wrong now, they will take care of me. Highly recommended!

Just received it, but the cylinders don't work! the acp cylinder wont even fit in the gun. the rod to swap out the cylinders is too tight, I had to use pliers to remove it and yes, I did depress the release pin. the LC45 cylinder after loading 4 rounds the cylinder wouldn't rotate. it looks like the cylinders weren't cut for this specific pistol, the headspace isn't large enough. I even tried 2 different brands of ammo. called company customer service but nobody answered the PHONE! left a vm.. looks like have only 10 days to ship back..

Chris,
We're very sorry about the issue you experienced. EMF had a fit problem stemming from Italy on these cylinders. I know that your cylinder has already been sent back and fitted, and it should be working well now. Every gun we currently have in stock includes cylinders that have been verified to operate as expected.