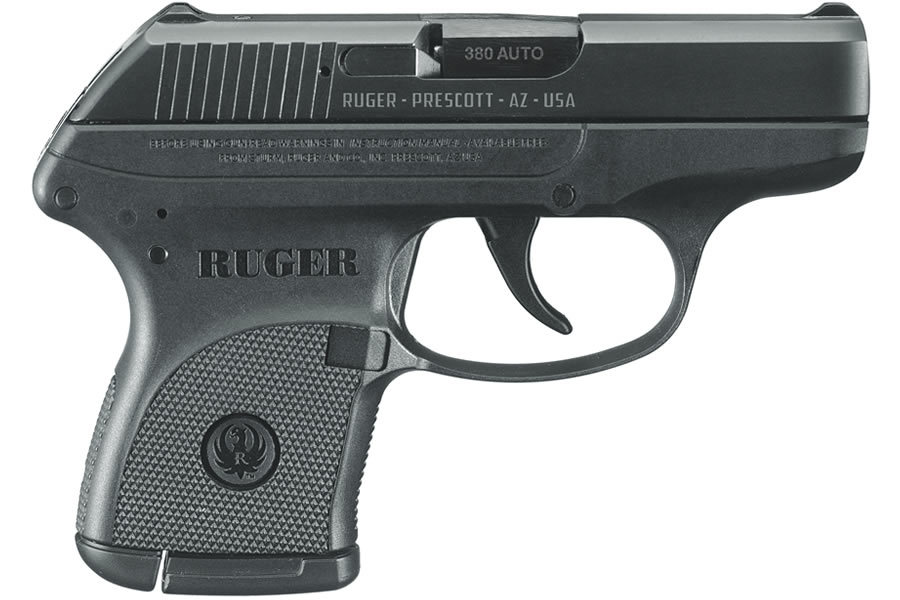 Designed with both male and female shooters in mind, the LCP is as affordable as it is reliable. At just 9.40 ounces (with an empty magazine), the LCP is lightweight and ideal for all-day carry - ensuring you have it when and where you need it.

Winner of the Shooting Industry Academy of Excellence® 2008 Handgun of the Year Award, the Ruger® LCP® delivers superior ergonomic design and handsome styling. When size and weight savings count, the LCP® is a natural for personal defense carry.

I'm a new gun owner and this lil gem is perfect for me.

I am an NRA and Concealed Carry Instructor, in my opinion this little gun is perfect for summertime carry with athletic shorts or in the pocket of your slacks. It has a very firm trigger pull and is very small, making it a little uncomfortable to shoot if you have larger hands. But it makes almost no imprint in your pocket when carried in the holster that is included.My usual CCW is a Glock 27, but this little jewel has made it easier to wear comfortable clothes in the hottest months and still be prepared. I have owned it for 18 months and shot approximately 1000 rounds at the range, average accuracy but never a problem,even with CHEAP ammo. I would recommend this as a reliable secondary weapon.

I have over 300 rounds thru this little gun, and have never had a problem, I trust my life with it, Most of my rounds are my own reloads, and this gun handles them with ease. I liked it so much, I bought a second one as a backup.

Let me start out by saying Sportsmans Outdoor Superstore is awesome to deal with. Now to the LCP, shot over 100 rounds no problems at all. Great little gun. Yes, the triggers a little long, but up-close-and-personal, its not going to matter. I purchased the Ruger authentic mag and have had no problems. If you buy some cheap knockoff you're going to have problems. Why buy a quality Ruger gun and skimp on the magazines? Spend the money and get the right magazine.

It doesn't make sense for me to compare this gun to others. That's your job. I will give you my thoughts on the LCP however. I practice with this gun often as it is my pocket carry choice. It has never failed. I can say that I have put well over 1,000 rounds through it. Friends have shot it as well and never had a failure of any type. I use factory mags. The gun is accurate and shows little wear for as often as it has been fired. I maintain it well, but have not polished anything or otherwise modified it. The trigger pull is a long one which I feel is necessitated by the lack of a mechanical safety. Recoil is moderately heavy. Certainly manageable. I would suggest a firm grip to reacquire the target as quickly as possible. If this pistol is your choice, I can find no reason why you should hesitate to buy it.

Gun was perfect from SOSS. This gun is definitely for up close and personal. I took it to the range and could comfortably only shoot 60 rounds. I pocket carry this daily.

This guy uses cheap, terrible quality Pro-Mag junk instead of the factory made Ruger magazines to save a buck and blames the gun for it, then has the nerve to say don't trust your life to the LCP when he trusts his life to third rate junk dealers like Pro-Mag because they are cheaper than proper, quality magazines. This little gun is a great pocket pistol, good for jogging or compact conceal carry, just remember if you are concerned about your safety, do not be a cheapskate then blame the gun for bad magazine problems. Get the factory mags for back up and never put promag garbage in any gun you own, ever.

The Ruger LCP is a real bargain. I wanted a good backup pocket pistol and I'm very pleased with this gun. I figured the recoil might be harsh with such a small lightweight handgun, but it was surprisingly manageable. It functions flawlessly and hits where you aim at ranges beyond the intended purpose of use. IMO, you can't go wrong with the Ruger LCP if you're looking a good reliable pocket gun.

I would not recommend the Handgun for any use. The slide sticks. It also doesnt accept fully loaded Promag magazines. Not a gun you want when your life depends on it!!!

Ruger always makes excellent firearms for very reasonable prices. The LCP is exactly that. I have owned two of them and they both ran great. Never had a single issue with the. They are super lightweight and great for Pocket carry. SOS has the best price on the LCP so I bought another one along with the appropriate model Sticky holster and it's a match made in heaven. Very much recommend Sticky Brand holsters for pocket carry. They are great.

Let me start off by saying that every bit of my experience dealing with SOSS has been top notch. These guys are my #1 source for all my firearm needs. Now to the LCP. Didnt like at all. When I changed mags after the mag run through the gun, it wouldnt feed. Slide locked up and I could barely get the mag out. Broke it down, cleaned it thoroughly, and re-assembled. Takedown pin was hard to re-insert. Didnt seem to want to line up. Got it back together and it ran OK. Trigger was too heavy for my liking. Decided to only use ti as a 3rd back-up. Ended up selling it and my TCP and buying a SIG P238 Scorpion. P238 is the way to go!!!

First off let me start off I have read lots and lots of reviews on the Ruger LCP 380 ACP. Most were not kind FTE, FTF... But I found that not to be true in my case. It shot fine and the sights are a bit small I hit the target and thats what counts!!! The recoil is modest for a pocket rocket CC. Out of 150 rounds I got 1 FTE and that was the first clip. I would bet my life the Ruger. Its as advertised great shooter as a light weight CC. And SOS was great at shipping free 2Day Air straight to my FFL dealer Thanks SOS !!