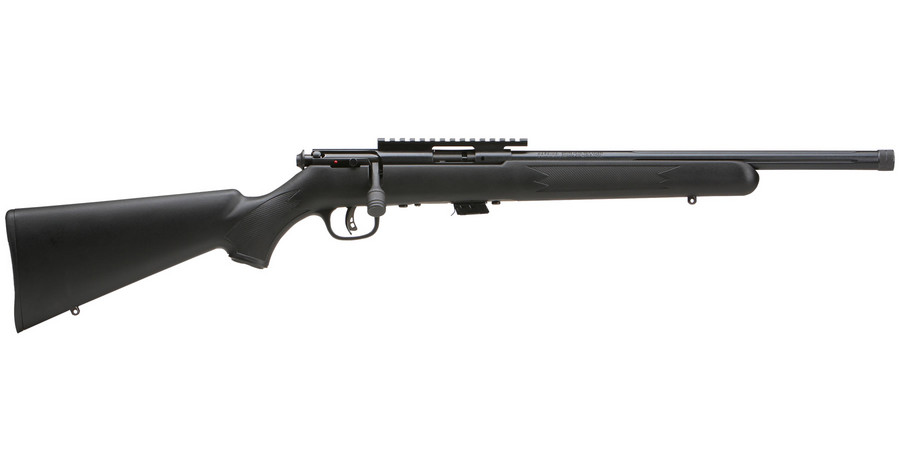 Savage has been making rimfire rifles for more than 100 years, and continues to build on this tradition of excellence. The most fired guns in many gun collections are often rimfires, and that’s why Savage takes them as seriously as any other rifle they make. Savage knows their reputation for accuracy rides on every shot.

Whether you’re looking for your kid’s first rifle or the latest in hyper-velocity and high downrange energy delivery for your own pursuits, the Savage line of rimfire rifles has what you need.

Only complaint is length of pull, but Boyd makes nice aftermarket stock. This is best .22 semi-auto on the market - accuracy - not finicky - and easy to accessorize. Didn’t purchase from Sportsman Outdoor, but wish I had at this price!

Awesome little plinker. Took about 10 shot to get it sighted in. Excellent accuracy right out of the box. You won’t be disappointed. Fast shipping too.

Really nice learning rifle right here. Had some problems with the bolt and had to reach out to Savage for some new bolt extracting pins. It was pretty easy to replace the parts on the bolt and the gun shoots really well. I wish it included a larger magazine as well.

Great rifle. Everything good that you've read or heard about it is true. It shot great with lots of ammo. Even the Thunderbolts. I tried about 30 28 kinds of ammo. Different brands, weights, velocities. At first, I settled on the C.C.I. green tag. The next time I shot the rifle with the green tag ammo I noticed that the accuracy was not consistent at all. I know it wasn't the rifle because I could hear the sound of the round changing from one round to the next. I was very disappointed with that outcome. I tried it again on another occasion and same results. Tried another variety of ammo and found the C.C.I. select 40 grain to work great. Very consistent and very accurate.

This rifle is a blast to shoot. It has become my favorite. I've wanted one of those for a long time but kept putting it off. I should NOT have done that. At 50 yards, it's boring. At 75 yards, it's boring. At 100 yards, a little less boring due to the wind factor. I was hitting 3/4 inch targets from 75 yards away with boring regularity. At 50 yards, well, I almost started to pick off flies. But, they weren't bothering me, so, live and let live.

Don't let the plastic stock bother you. It shoots great with it. If it does bother you, order a wooden one from Savage. I plan on doing that only because I want to reward that rifle for its great accuracy. It will be merely cosmetic, mind you. Anyone who takes away ratings stars for its plastic stock is doing this rifle a disservice. You buy a rifle for its accuracy. Nothing more. Nothing less. That's how I see it. This is such a good rifle, I am seriously thinking of getting another.

It's the ammo causing the ejection issues with this rifle, the CCI I'm using has some wax type coating on it. If I clean the barrel she ejects flawlessly but after 10-15 rounds it gums up. Rifle is very accurate and a complete bargain.

Very fun rifle for the kids to learn on and adult to plink on. Sadly I'm experiencing an ejecting issue, which if you Google around, is not rare. It's a wonderful firearm except for the nagging failure to eject issue I'm about to take up with Savage and hopefully rectify.

Some of these accuracy claims are hilarious. 1/2" @ 50 is totally doable but a dime size @ 100 yards is too funny. Also, if a person isn’t shooting at least a 5 shot group he is just fooling himself.

Great platform to build on. Little rifle was very accurate right out of the box. Great price. I have since added a Boyds custom stock, DPMS undermetal, Mueller 4 X 14 scope, Harris bipod. I run it with my Huntertown Arms suppressor. 1/2 groups at 50 yards with CCI standard velocity ammo. Stays subsonic, all you hear is click

Let me start off by saying that this gun shoots with guns 4 times the price and is sold at a price that can't be beat on the web. I own several target rifles and decided to give this one a try, and now it is one of my favorite. The size is great and when you mount the right glass, this thing is a tack driver.

As always, Sportsmans has the best price and awesome service. I check the site every day for great deals, and have never been let down. Keep it going guys!

Great tack driver. Came right away and I couldn't be happier.

Bought my Savage MK2 FV-SR from SOS a couple of months ago, and WOW . . . What a great shooter! I love this rifle. For a .22LR, it has a good weight, and the barrel is very accurate. I have impressed many people the range because the rifle looks like a million bucks, and shoots just as good as more expensive rifles. Mine likes Aguila Super Extra Standard Velocity 22LR, hole in hole at 50y. When I put my silencer on the barrel, no change in accuracy, or shifting groups. I loved it so much that I even made a YouTube review of the rifle. You are going to love it!

I placed an order for a Savage rifle on the 19th of November. It's now the 27th and nothing has shipped. So I won't be seeing this rifle until new year at this point. FIRST AND LAST TIME ORDERING SOS. Trust me, I have ordered from dozens of online firearms dealers. None have been so slow as SOS.

1st, are the scope mounts loose on your rifle. Tighten them all and use blue locktite. The plastic/rubber stock. Is it free floating or bent and you need to relieve one side.

After lapping the barrel on my 24 model, MAN! What a tack driver!!!

On my short barrel mdl, I notice the protector tapped cap for threads on front wants to move of course, as the rifling suggests that twist.

So, I'll just play with that like a mini harmonic balancer, find the sweet spot and lock it in.

I really cannot believe the accuracy of these 2 twentytwoo!, I've only used, Rem Stnd vel target & a little Rem Eley, after breaking in with 10 laps of Winchester Copper Clad, cleaning each shot with solvent/patch. Most Highly Recommend.

I added a skeet shotgun pad to extend length to 14 and a comb for scope height, on the shorter one, the stock is warped sideways and up/down at the receiver. Still shoots like crazy tight.

This site is the best for good prices. This is my third purchase from here and this gun is awesome! It is very accurate even with the cheap stock and came just as described. I will continue ordering for this site.

Fast shipping and a great price. The gun is used with my Sparrow Silencer put a Nikon .22 scope on it and at 50 yards it shoots inside a quarter. I love it the squirrels hate it.

This was my second purchase with Sportsmansoutdoorsuperstore.com and it was as smooth as the first. These guys are getting first dibs on my future firearms purchases in the future.

As for the rifle, I couldn't be happier. After minimal time sighting in, I was hitting 2.5 inch groups at 70 yds with a $30 scope! I hope to add a nice Mueller APV optic and Boyds Pro Varminter formerly known as the Tacticool stock in the near future to get even better groups.

If you purchase the rifle, I'd recommend doing a quick field strip prior to use. It appears Savage did not lubricate the bolt very well at the factory. After a quick oil job you'll be up and running. The smooth action, adjustable trigger pull and ease of use make this an extremely enjoyable rifle to shoot. It's hard to beat the quality at such an affordable price.

Ordered this gun on Sunday it was delivered on Wednesday thats fast.

Havent had a chance to sight it in yet but the reviews are great for this gun it looks great the stock needs to be better but for the price its a great deal.

This was my very first purchase with sportsmansoutdoorsuperstore and it couldnt have gone any smoother! You get weary of online gun sales, but I literally had my rifle in 4 days! Big kudos to them! The FS-VR is a bolt action .22 with a fluted and threaded barrel, so you know why you are buying this. I paired this with a Nikon rim fire but then returned it for the Mueller APC and after dialing this rifle in, I am able to group easily with a dime at 100yds...one of my set goals with this rifle is to hit a 5in plate at 325 yds out. With the correct elevation changes, I did just that, with bulk ammo mind you .This rifle impresses me every time I take it out, the stock is something to be desired...feels really cheap and the cheek rest is way to low, I ordered a Boyds tacticool stock for it and the fit and feel are perfect! If you want a accurate and easy to shoot .22, this is the one to get!