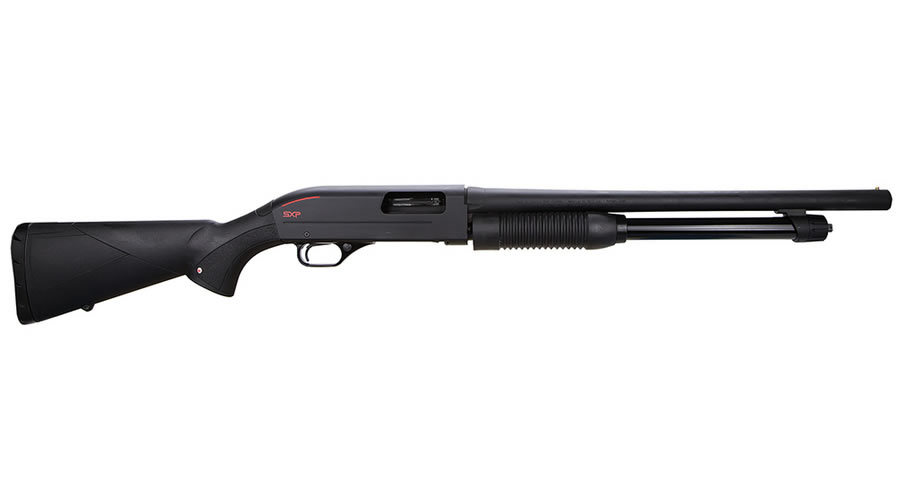 $374.99 after applicable rebate.
Learn more
Temporarily Out of Stock

Easy to pack and carry, handling buckshot or rifled slugs efficiently through the fully chrome plated, 18” fixed cylinder choked barrel (no constriction) for wide patterning. This open choke is also very accurate when using Foster-type slugs. It also has non-glare metal surfaces with a tough composite stock and forearm. Additional features include a five-shot magazine (plus one in the chamber), and a positive, deeply grooved forearm for control and stability.

Whether it’s multi-gun competition or protecting your home and family, the Super X Pump Defender™ is the perfect choice. Its inertia-assisted action, six-shell total ammo capacity, durable composite stock and ribbed forearm give you an edge against any odds.

Can't cycle shells with out bullets catching and gets jammed.

First, Sportsman's Outdoor Superstore is great, I've ordered many times from them and will again, however... 10 rounds in the shotgun failed to eject a spent shell. The trigger was stuck back, the action would not pump. I had to disassemble it to get the shell out not even knowing for sure if the shell was spent or not and I could Winchester and it took them a week to figure out it needed to be replaced and a week later they still haven't sent out my replacement. Their estimated time will put it at a month total time but they be sure to tell you to give them 3 to 5 extra days incase their estimated time is wrong.

I Love my shotgun!! Sportsmans is the best, hands down. Great Price and Fast Service.

I typically would have purchased the Remington 870 because that is the shotgun I'm most used to. But I went with the Winchester SXP 12 gauge and have NO REGRETS WHAT SO EVER! I actually purchased two of these shotguns, but have not yet had the chance to live fire them. That being said, the shotguns seem to be quality made & the action is smooth. My final cost was outstanding and Winchester was amazingly fast in sending my rebates.