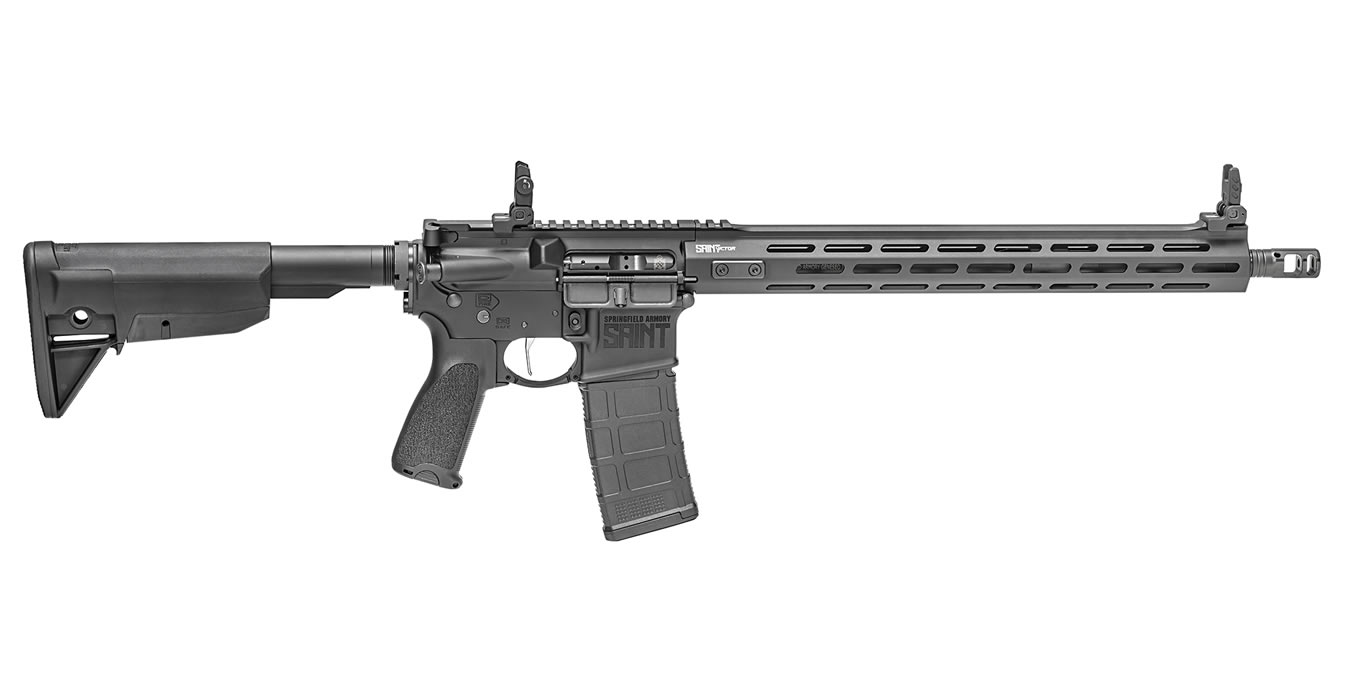 Limited-time Deal
In Stock with FREE shipping
Limit 1
Share this:

New for 2019, the SAINT Victor series of rifles and pistols from Springfield Armory are designed to give you everything you need on a premium defensive firearm, right out of the box.

Weighing in at 6.9 lbs, the lower receiver on the SAINT Victor Rifle is Accu-Tite tension-bonded to a flat-top forged upper receiver and features a 16” CMV barrel that is Melonite finished inside and out for the ultimate in corrosion resistance. The rock-solid, patent-pending M-Lok free-float 15” handguard protects the mid-length gas system and provides plenty of space for accessory attachment.

At the heart of SAINT Victor Rifles is an M16 bolt carrier group that is also Melonite® finished, HPT/MPI tested, shot peened, and houses a 9310 steel bolt. With a fit, finish and feel superior to that of much higher priced AR options on the market, the SAINT Victor Rifle is also available in a California-approved model for 2019, with a Strike Industries Featureless Grip and Magpul MOE fixed stock. An 11.5” SBR configuration is also available for LE and civilian use.

I believe this is the best A R rifle in it,s price range period .

Fast shipping considering the times. First time out put about 300 rounds through it ran flawlessly.

This was my first online firearm purchase. I have to say I was a little nervous. With the exception of a Fed Ex delivery issue, I have to say that my experience with Sportmans Outdoor customer service was excellent. I left a voice mail and sent an email and was contacted promptly on the next business day. I recieved my firearm two days later in excellent condition. I am looking forward to getting the chance to put some rounds through it. All in all I will definitely be purchasing more firearms from here.

The Saint Victor is an absolute homerun for Springfield. In terms of value, there is no other 5.56 chambered rifle on the market that can hold a candle to the Victor. I would absolutely trust my life to this rifle, and its ready to rock right out of box.

First off, I'd like to say Sportsman's Outdoor Superstore is fantastic. Best price on this item! I ordered online and received it in less than a week. Springfield Saint Victor looks beautiful. Five stars rating for this website, if you find what you looking for and if they have it in stock. Did I said my new AR SA Saint Victor looks fantastic?!!!!