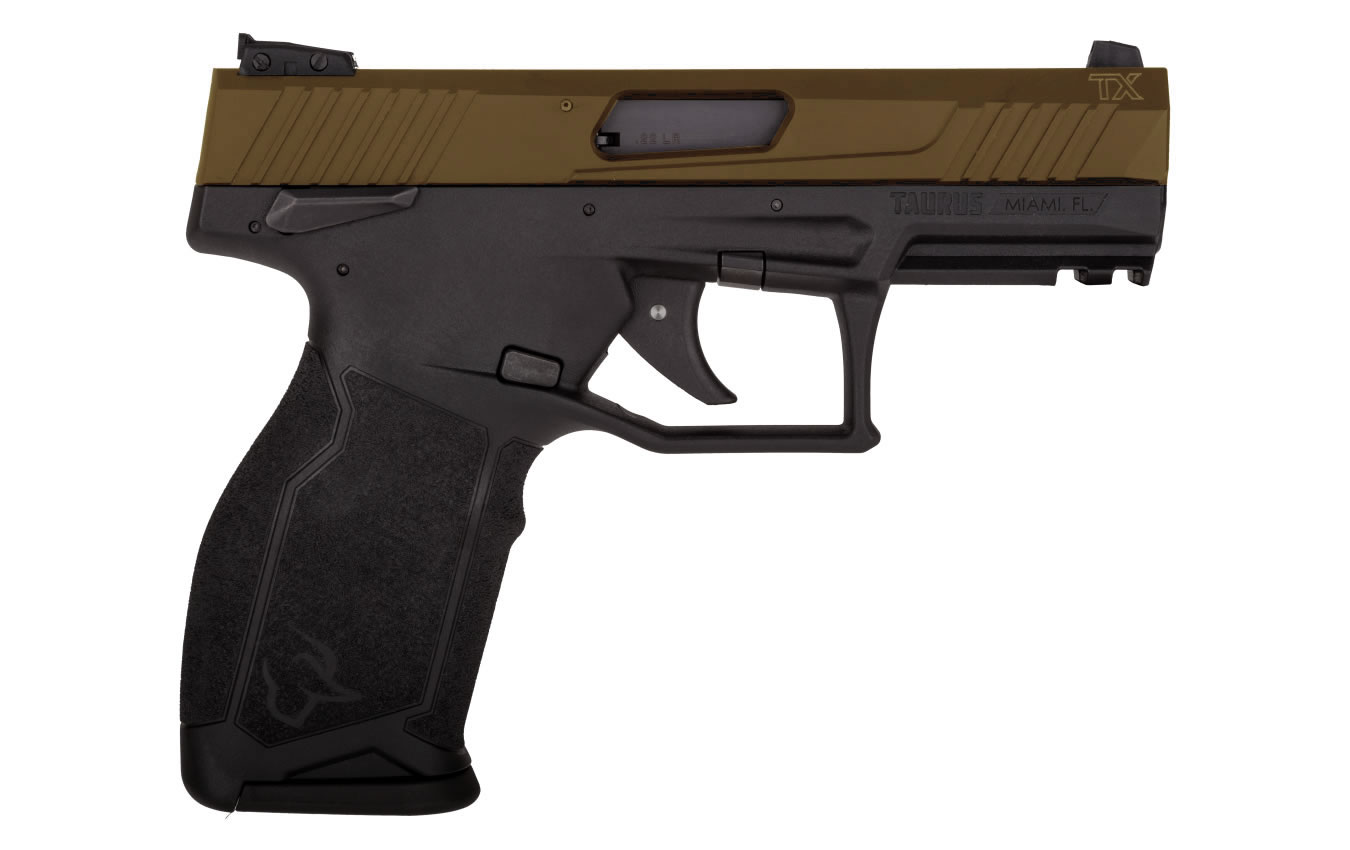 This exclusive Taurus TX-22 pistol features a black frame with a bronze slide.

Engineered to deliver best-in-class accuracy and reliability, the TX22 polymer sporting pistol shoots and feels every bit like a custom-tuned competition model without any costly upgrades or modifications.

From the short, smooth pull of its precision-designed Taurus Pittman Trigger System (PTS) to the built-in comfort of its ergonomic grip, the TX22 is one performance-driven full size that’s ready to race. Right out of the box.

(5 out of 5) Taurus TX22
by Bruce from VANCOUVER, WA on April 2, 2022
I have purchased several firearms from Sportsman's Outdoor Super Store. Quick shipping. No issues. I got a great price from this website.
The firearm has performed flawlessly. It's fun to shoot.
(5 out of 5) All day shooting
by Ken from Crossville, TN on March 18, 2022
I bought this because it had the 15rd mags which is better than the SR22 and Walther.
I’m glad I did. I ran about 2000 rounds through mine so far. Love the trigger. And it fires everything I have put in it. Very accurate, also well balanced, and is great to shoot one handed or with both. It’s just a fun gun to shoot period…
(5 out of 5) Great out of box
by George from Tamarac, FL on December 3, 2021

Gun is great right out of the box, didn’t even need to adjust sights. Not sure if magazines will last not being metal, only time will tell. Also, not very happy with dry firing in order to remove slide`;` hopefully no damage will result from this.

This Striker-Fired .22 LR pistol will change your attitude about Taurus. All I can say is WOW. The trigger is excellent. The total feel of this pistol is great.

It is super fun, a couple failures to fire, but I’m sure it’s ammo related being a 22. One of magazines cracked, without much use, prob 100 rounds, which I hope can be replaced.

I like, and pay for, high quality guns. I had always heard that Taurus guns sucked. I bought this because I wanted an inexpensive plinker and it got good reviews on YouTube. I also liked the suppressor adapter, but I haven’t tried that yet.
Anyway, I took it to the range, didn’t read the manual or clean it. Went to the range and fired off three mags—no problems. Virtually no recoil. The loader didn’t help much but was unnecessary because it loaded by pushing down the spring like most 22s. All in all an impressive little pistol and a good value. I’m gonna try another Taurus soon!

These are fantastic little guns that perform way above their price range, and you get that Taurus LIFETIME WARRANTY on top of great reliability, and what is truly a fantastic little rimfire pistol at a great price.
My only complaint is hot ammo shoots a little higher than I can adjust the sights to, but it's not that bad. It feeds bulk ammo way better than average and even shoots low velocity ammo too. This gun is probably the best .22LR in its price range. You get 2 15 round mags, and other featured in applicable models that cost $200 extra from other manufacturers for the cost of the gun all by itself.
I could rave on about how great this gun is for hours, but buy one and try it for yourself. At this price buy two or three!

Fit and finish is very nice, comfortable feel, nice trigger, which got even better after a few hundred rounds, no failure of any kind, and oh yea, two sixteen round mags .

I didn’t think the demo video Taurus put put out of a professional shooter doing a mag dump effectively was a reality for us lowly mortals. Admittedly, I’m not the best shot, but in multiple mag dumps I have been able to maintain a softball sized group at 15 meters. Is this how good shooters feel?!
Despite being full sized, it's super light and I kinda want to carry out for a CCW. I get it, 22’s aren’t defensive rounds...but poke 15 holes in someone’s heart/lungs and I don’t think they are pulling through.

I can’t explain how happy I am with the purchase without driving home the point that this full size 22 just flat out works. It does exactly what I bought it for and then some. Out of the box suppressor ready, 16 round mags are amazing albeit hard to source really anywhere, eats whatever ammo I’ve fed it, and is super simple to break down and clean. I’ve had a Walther P22 target for the past 10 years and I’ve really grown to love it and this is the only other 22 pistol I’ve bought since then.

I’m not going to sugar coat it, but first time on the range I immediately realized the P22 is dated and falls short for just about every metric to measure. Capacity, comfort, looks, Wright, overall feel in my hand, and price the Taurus takes the crown. Literally the only place the Walther wins is that magazines are easy to source although very expensive, and there’s more aftermarket support, but that’s because it’s been around way longer.

If you’re on the fence about getting this gun because the internet has told you “Taurus is crap” or something similar don’t concern yourself. This is a solid little hand gun that delivers and is a blast to shoot. Not to mention it’s very friendly on the wallet. I honestly plan to buy another 1-2 when they have rebates or go on sale again. Looking forward to buying from Sportsman’s Outdoor Superstore as well. Super easy and fast purchase.

It ate up lead round nose, copper plated round, hollow points, truncated cones and it even cycled through the 60gr Aguila Sniper Sub Sonic albeit 1 stovepipe in 150 rounds with the SSS rounds. Great feel to the gun, super light weight. Accurate enough as is, can always be improved, but even my little boy was popping cans at 20ft on his first range visit with handguns. Controls are located well and easy to manipulate. My 7 year old has no issues properly using the gun and its controls -racks the slide like a champ easy for the young and old!

Box to range with no disassembly/cleaning/lubing and put close to 1k rounds through it with only 1 failure, and it was a stovepipe on that short shell of the Aguila SSS round. Cleaned it stupid simple takedown, went for round 2. Over 1k more and it performed fantastic. Cycled all the grab bag and dirty rounds that are usually saved for the pump. Tortured it a bit tried to... by staggering the magazine between hyper and sub round nose & hollows & truncated- cycled through it all beautifully.

My only negative on this pistol is the 16 round magazines are out of stock EVERYWHERE. Otherwise, I love this gun! Oh, can’t forget about that sweet trigger & reset as well with a nice wall and crisp break! I’ve shot some fancy .22lr’s, but this one is a worry free blast to shoot. Grab whatever boxes of ammo are on the closet shelf or whatever you’re left with on the shelf at your local brick and mortar and you’re sure to have a good time. Second purchase from SOSS, I see more of my hard earned $$$ going their way again in the near future!